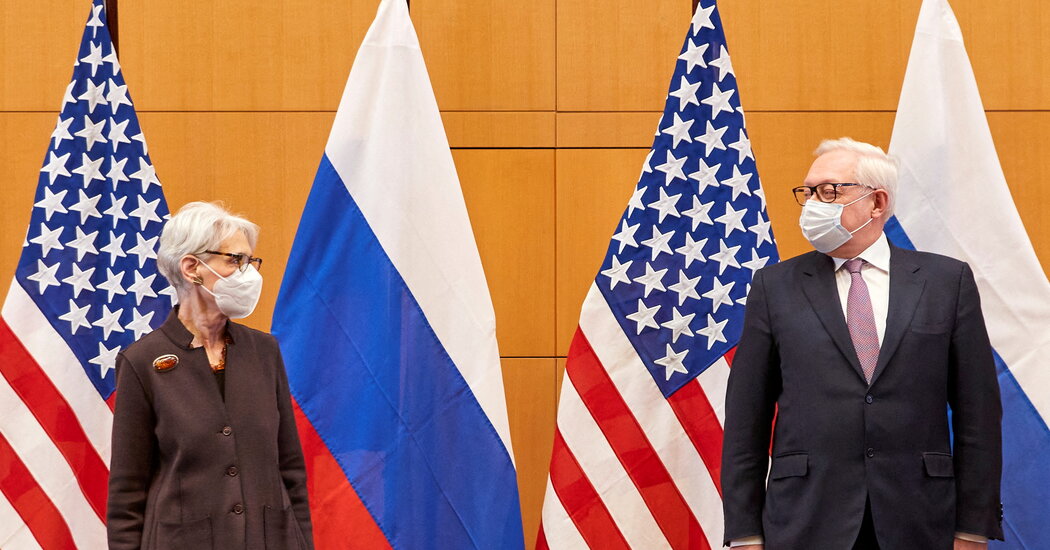 We’re covering talks about Ukraine and Djokovic’s return to Australia.

Russia says it has no plans to invade Ukraine at talks

After nearly eight hours of negotiation in Geneva, Russian and U.S. officials said they would continue discussions, but they remained far from agreement on meeting each other’s security concerns. Here are the latest updates.

Russian officials said they told their American counterparts they had no plans to invade Ukraine. “There is no reason to fear some kind of escalatory scenario,” Sergei Ryabkov, a Russian deputy foreign minister, told reporters after the meeting.

Wendy Sherman, the lead American diplomat, said the U.S. was “pushing back on security proposals that are simply non-starters for the United States,” including Russia’s demands that Ukraine not be admitted into NATO and that NATO pull its troop presence from Ukraine.

Sherman said that the two sides discussed the possibility of reviving the Intermediate-Range Nuclear Forces Treaty, and that the U.S. made clear that it was open to discussing “ways we can set reciprocal limits on the size and scope of military exercises and to improve transparency about those exercises.”

What’s next: The talks were the first in a series of discussions that will take place in Geneva, Vienna and Brussels this week. Ukraine will be missing from two of the three sessions; President Volodymyr Zelensky has decided not to rely wholly on U.S.-led negotiations.

Context: A buildup of 100,000 Russian troops near the border with Ukraine has raised concerns among Western and Ukrainian officials that the Kremlin is preparing for an invasion. See how Russia’s troops are positioned.

The ruling still does not guarantee he will be able to play in the Australian Open.

The judge, Anthony Kelly, found that Djokovic had been treated unfairly after his arrival at a Melbourne airport for the Open, where he had been cleared to play with a vaccination exemption., which stemmed from what his lawyers said was an infection he had in mid-December.

After detaining Djokovic, the border authorities promised to let him speak with tournament organizers and his lawyers early Thursday, only to cancel his visa before he was given a chance.

What’s next: Restoring the visa does not guarantee that Djokovic will be able to vie for his 10th Open title when the tournament begins next Monday. In court, the government’s lawyers warned that the immigration minister could still cancel his visa, which would lead to an automatic three-year ban on his entering the country.

Here are the latest updates and maps of the pandemic.

After Haiti’s president was assassinated and the country slid into turmoil, Ariel Henry became head of the government, responsible for bringing the killers to justice and helping the country heal.

But new evidence suggests that Henry maintained communications with a prime suspect in the case — and that the two men stayed in close contact even after the murder.

The evidence against Henry centers on his connection with Joseph Felix Badio, a former justice ministry official wanted by Haitian authorities on suspicion of organizing the July 7 attack that killed President Jovenel Moïse.

Phone records seen by The Times, as well as interviews with Haitian officials and a principal suspect in the crime, reveal potentially incriminating details. Among them: Badio spoke to Henry before the killing and afterward, including two calls on the morning after the assassination. Badio visited Henry’s official residence while he was on the run from law enforcement, and he was not stopped by security guards.

When officials tried to investigate Henry’s links to Badio, they were fired by the prime minister.

Response: A spokesperson for Henry said that, despite the phone records, he did not speak to Badio after the assassination and that he has no relationship with the suspect. Badio was unreachable for comment.

Life on the remote Isle of Rum in the Scottish Hebrides is not for everyone — there are no doctors, restaurants, churches or pubs. A couple years ago, the residents of the isolated outpost appealed for newcomers to apply and join them. Out of 400 applications judged to be serious, four new families were selected, raising the island’s population to 40 people.

Bike trails to inspire carbon-conscious travelers. A Black district that is once again distinguishing itself as a cultural center. A lush archipelago that resists overtourism.

These are among our 52 Places for 2022, an annual Times feature on great travel destinations. This year’s list highlights places where positive change is happening, whether environmental or cultural, and travelers can be part of it.

But these locations are worth seeing for their straightforward pleasures, too. The vistas of Iberá Park in Argentina are stunning, even if you don’t know that the park’s grasslands are crucial to saving the strange-tailed tyrant birds. And the braised artichokes and Burgundy snails served at EDWINS in Cleveland are as much about gastronomy as they are about teaching formerly incarcerated people a new trade. See all 52 Places.