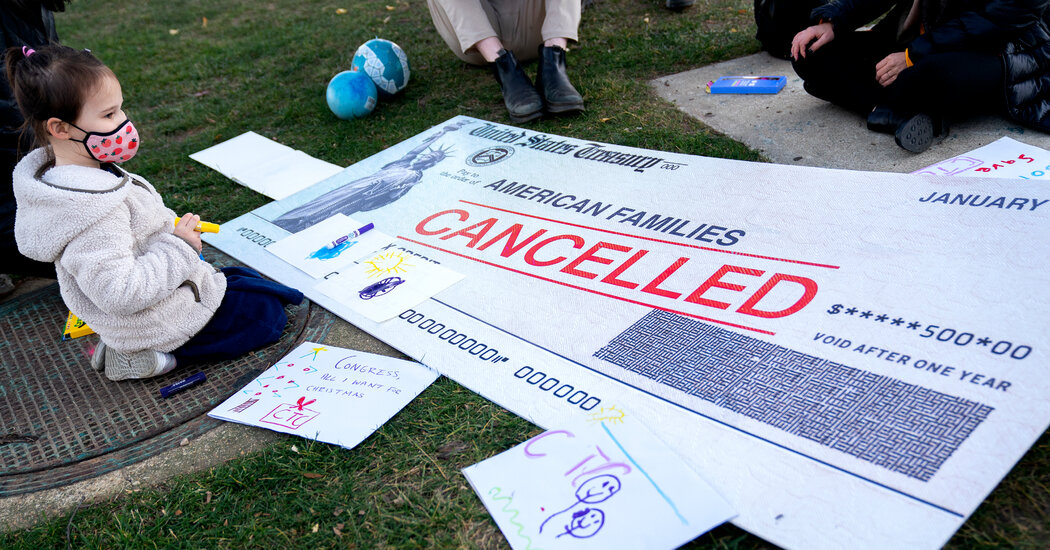 Proponents of the expanded credit counter that it was designed to reach a wider array of families, including those who stay at home to raise children. “What about the grandparents that are out there taking care of kids?” said Representative Rosa DeLauro, a Connecticut Democrat. “What about the disabled who have kids? Should they not get this?”

Yet fears that some might abuse the credit may also be sapping support for it. In focus groups organized this year by the Institute for Family Studies, Mr. Wilcox’s think tank, even some participants who stood to benefit from the credit argued that others might spend it on vacations, have more children to maximize its value or become dependent on government support.

Biden’s ​​Social Policy and Climate Bill at a Glance

The centerpiece of Biden’s domestic agenda. The sprawling $2.2 trillion spending bill aims to battle climate change, expand health care and bolster the social safety net. Here’s a look at some key provisions and how they might affect you:

Health care. The bill’s health provisions, which represent the biggest step toward universal coverage since the Affordable Care Act, would expand access for children, make insurance more affordable for working-age adults and improve Medicare benefits for disabled and older Americans.

Criticisms of unconditional benefits often stigmatize poorer Americans and single parents, or are influenced by racist tropes, as with the stereotype of the “welfare queen.” Yet the skepticism appears broadly held.

“People wildly overestimate the amount of abuse and fraud in various kinds of social programs,” Professor Campbell said. “But it just strikes people as plausible.” Republicans, some of whom have attacked the expanded credit as “welfare,” have reinforced this notion for decades. But so have some Democrats. “This is something that’s been in our bones for a long time,” said Patrick T. Brown, a fellow at the conservative Ethics and Public Policy Center who helped set up the Institute for Family Studies focus groups.

Those ingrained attitudes could be limiting support for Mr. Biden’s credit. They may also explain why congressional efforts to extend it have failed so far. Senator Joe Manchin, the West Virginia Democrat whose vote is most likely needed to pass any bill to do so, holds deep reservations about the program and has floated adding work requirements.

Republicans in Congress unanimously oppose Build Back Better. While some — including Senators Marco Rubio and Mike Lee — support a more generous child tax credit, they have criticized Mr. Biden’s expansion because it lacks work requirements. Other Republicans argue that extending the credit long-term will increase the federal deficit. And some say it has helped drive inflation higher (many economists doubt it has played a big role).

If Congress does not renew the expansion, the child tax credit will revert to its less generous, pre-Biden amount — no longer accessible to families who don’t work, and no longer available as advance monthly payments rather than as an annual credit. Many experts expect poverty, which affected about 16 percent of children in 2020, to rise.