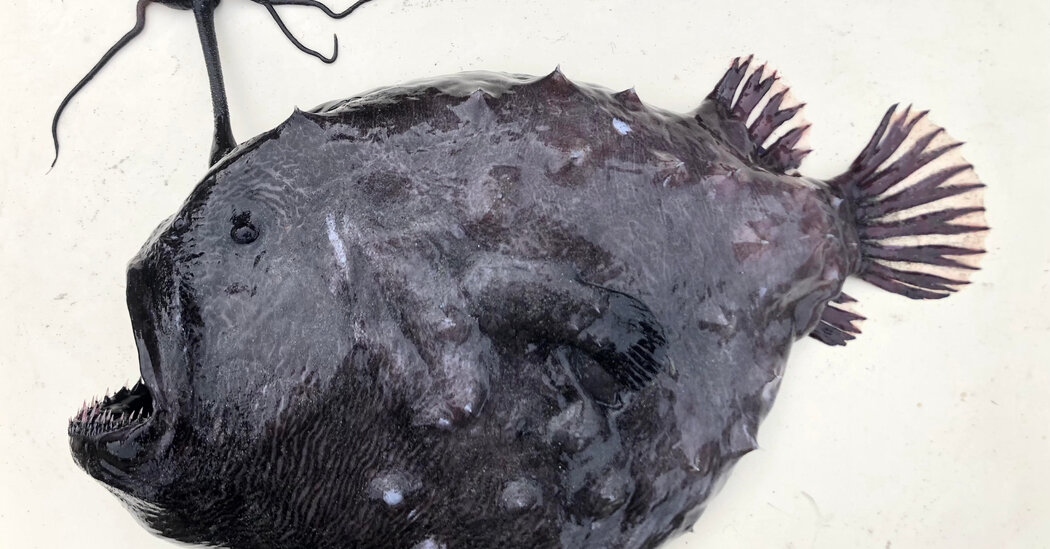 One morning in May, a fisherman happened upon an unsightly creature washed up on a beach in Southern California: Mouth agape, it had needlelike teeth, slick black skin and a bulbous appendage protruding from its head.

Several months later, another just like it beached itself in San Diego. Then came the third.

“I was like, ‘Oh my gosh, another one?’” said Ben Frable, a collection manager at Scripps Institution of Oceanography in San Diego, and now, the custodian of one of the creatures: a rare species of anglerfish, known as the Pacific footballfish.

He added, “It was pretty exciting.”

The fish — which live thousands of feet beneath the ocean in near-total darkness and freezing conditions — are rarely seen by humans. The first was discovered in the early 1900s. Since then, 31 specimens have been collected worldwide, two of them last year in California. (The third was photographed but, before scientists could collect it, washed back out to sea.)

This year is “a good year for footballfish,” Dr. Frable said. “At least for us encountering them, maybe not for them — they are deceased.” The last collected in California was 20 years ago, he added.

Pacific footballfish are flabby, slow and poor swimmers. The female lures her prey using a bioluminescent appendage that hangs like a lantern in front of her jaws. (The largest female ever found was 18 inches long. The males are a small fraction of that size.)

But much remains unknown about these bizarre deep-sea creatures, including why three washed up last year on California’s beaches.

Scientists say it could be because of an especially good breeding season or unusual ocean currents and temperatures. Or perhaps, Dr. Frable said, it’s just “serendipitous.” The beachings are probably not the result of the oil spill off the coast of Southern California in October, or any kind of sonic boom or other freak occurrence, he added. In those instances, many marine organisms would wash ashore, not just a couple of fish.

“It is an interesting phenomenon, but we’re not alarmed,” said Todd Clardy, the collections manager of ichthyology at the National History Museum of Los Angeles County, where the fish discovered in May is now preserved. He added, “We are thrilled that we could get one.”

For now, California’s ichthyologists are waiting, breath bated, to see whether more of the deep-sea denizens will wash ashore.

“When these types of things happen, I just think it has more people paying attention,” Dr. Frable said. “The scale of diversity of life on the planet is kind of out of the bounds of what we generally conceive,” he added.

“There are still these mysteries out there.”

“I adore it as a place to go and chillax, have some fun, and just feel free and happy. There is a lot to see and do, good places to eat and shop — and great weather! Even in the summer when it is 115 degrees, it is super great. Hotels are super, there is a casino, and beautiful scenery. I love the sand, along with the Joshuas and yucca palms. Just so beautiful.”

Tell us about your favorite places to visit in California. Email your suggestions to CAtoday@nytimes.com. We’ll be sharing more in upcoming editions of the newsletter.

Ryan Kaji, 10, and his family have turned videos of him playing with toys into a multimillion-dollar empire. Why do so many other children want to watch?