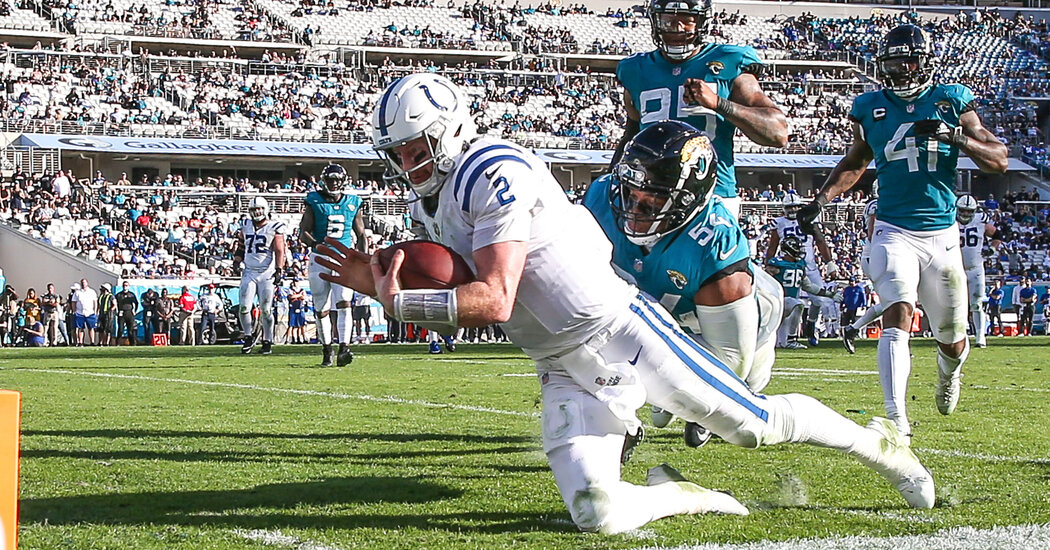 For Chris Ballard, Sunday’s regular-season finale was five years in the making. Over that time, Ballard, the Indianapolis general manager, built a team that was purportedly ready to make the leap in 2021.

His Colts teams had amassed a 32-32 record entering this season, and Ballard had developed a reputation for drafting well, trading smartly and resisting overspending. This season’s team boasts a contender for the Most Valuable Player Award in running back Jonathan Taylor.

With one win over the lowly Jacksonville Jaguars, the Colts had a chance to enter the A.F.C. postseason as absolutely the last team anyone would want to face.

The Colts had everything to play for. The Jaguars, amid yet another lost season, and having ousted their head coach weeks ago, had nothing at stake save draft positioning. But the Jaguars prodded one of the most physical teams in the N.F.L. for a full game and ultimately upended the A.F.C.’s playoff standings.

With the loss and the Steelers’ overtime win over the Ravens, Pittsburgh takes the A.F.C.’s seventh seed and the final wild-card spot will be decided by the winner of the Chargers-Raiders Sunday night game.

In retrospect, this Buster Douglas-style upset wasn’t so unexpected. Indianapolis’ strange loss to the Las Vegas Raiders in Week 17 meant the Colts could not afford to rest their starters and would need the victory just to secure a playoff berth that, two weeks ago, had seemed assured.

The Jaguars usually play the Colts hard, having now beaten the Colts at home in every season since 2014, and must have relished the chance to ruin their division rival’s postseason attempt.

Then, there was the absence of the former Jacksonville head coach Urban Meyer, who was fired on Dec. 16. Without Meyer’s rudimentary play calls, Trevor Lawrence, the No. 1 overall draft pick last April, had finally resembled the strong-armed quarterback who dominated college football, completing 23 of 32 passes for 223 yards, two touchdowns and no interceptions.

However, don’t get it twisted. This game had been the Colts’ to lose.

After the Colts lost to the Buffalo Bills in the wild-card round a year ago, the veteran quarterback Philip Rivers retired and Ballard went all in by trading for Carson Wentz, who had commanded the Eagles in the regular season en route to their Super Bowl win to end the 2017 season.

Wentz has mainly been a caretaker this season, working off play-action and hitting the occasional deep throw. But Sunday, with the Jaguars holding Taylor to 77 yards on 15 carries, Wentz needed to be a playmaker. He took six sacks, lost a fumble and threw a pick against a Jacksonville defense that ranks as the second-worst unit in the N.F.L.

His worst mistake was a third-quarter fumble when, trailing 13-3, the Colts had an opportunity to restore some order to a chaotic game. On first-and-10 from the Indianapolis 38-yard line, the blitzing linebacker Damien Wilson dinged Wentz for a loss of 9 yards, and Wentz couldn’t turtle atop the ball on his way down. He fumbled, Jacksonville tackle DaVon Hamilton recovered and, four plays later, the Jaguars extended their lead to 16-3 on Matthew Wright’s 39-yard field goal.

The Colts again had a chance to rally, this time from a 23-10 deficit at the start of the fourth quarter. On fourth-and-goal from the 1-yard line, Taylor was stuffed at the goal line by a horde of teal jerseys.

Now Ballard must sort the blame for this failure.

The Colts had been a choice underdog bet to sneak into the Super Bowl because of Taylor and their brawling defensive line, which Ballard built as a counter to the pass-oriented rosters compiled elsewhere. So many other defenses prop both safeties back in coverage to contain the backyard antics of quarterbacks like Kansas City’s Patrick Mahomes and Arizona’s Kyler Murray and covet linebackers who hover in the light 230-to-235-pound range, all the better to drop back into pass coverage.

Up front, Quenton Nelson is unquestionably the best guard in football. This is also a defense that stole defensive tackle DeForest Buckner from San Francisco for a first-round pick. He’s been worth every cent of his four-year, $84 million deal. It’s a defense also built around one of the best playmakers in the sport in linebacker Darius Leonard, who forced an N.F.L.-high eight fumbles with four interceptions in 2021. Not to mention the slot cornerback Kenny Moore, a 5-foot-9, 190-pound pinball who’s easily one of the most underrated players in the sport.

Indianapolis dusted off some old-school football dogma by bludgeoning defenses with Taylor’s runs to dig itself out of a 1-4 hole early in the season. Taylor’s vision, power and speed had been unparalleled in wins over playoff-bound teams.

Against the Buffalo Bills, Taylor had a 204-yard, five-touchdown masterpiece. When Bill Belichick stacked the Patriots’ line to slow him, Taylor still earned 170 yards, including a late 67-yard blast that ended New England’s seven-game win streak. And with the Colts down to what was essentially its second-string offensive line in December, Indianapolis stymied the Cardinals, 22-16.

And it was all for naught because Indianapolis couldn’t beat Jacksonville, the team with the worst record in the N.F.L.

That’s about embarrassing as it gets.

Steelers 16, Ravens 13: Immediate beneficiaries of the Colts’ loss, Pittsburgh will earn the wild-card berth so long as the Chargers and Raiders don’t play to a draw Sunday night. Mike Tomlin has gone 15 seasons without a losing record and the shell of Ben Roethlisberger was good enough to eke out nine wins. T.J. Watt tied Michael Strahan’s career sack record (22.5) and had three quarterback hits.

Browns 21, Bengals 16: With the A.F.C. North locked up, Cincinnati (10-7) wisely sat its battered quarterback, Joe Burrow, and Cleveland was without Baker Mayfield. With little to play for, the Browns had 306 yards of offense mostly earned on the ground by D’Ernest Johnson, who had 123 rushing yards.

Lions 37, Packers 30: In one half, Aaron Rodgers was sharp with 138 yards and two touchdowns on 14 of 18 passing, a rhythm start that gave the offense a handful of reps before its first-round bye. After so many crushing losses, the Lions got a sweet win and unleashed a handful of trick plays. Detroit will likely continue to gut its roster in the off-season, but seems to have a budding star in receiver Amon-Ra St. Brown, who caught eight passes for 109 yards with a touchdown.

Titans 28, Texans 25: Despite Texans receiver Danny Amendola’s two late touchdown receptions, Tennessee clung to the A.F.C.’s No. 1 seed. Tennessee’s Ryan Tannehill threw four touchdowns, with no picks, in a reversal of his four-pick effort in a November loss to the Texans. With a first-round bye and Derrick Henry expected to return for the playoffs, the Titans have a phenomenal shot at reaching their first Super Bowl since the 1999 season.

Vikings 31, Bears 17: It’s abundantly clear at this point that Mike Zimmer and Kirk Cousins will take this Minnesota team only so far. A win over a rebuilding Bears team won’t mean much as the Vikings reassess their standing.

Football Team 22, Giants 7: On third-and-9, Coach Joe Judge’s team decided to run a quarterback sneak with Jake Fromm that summed up the Giants’ season beautifully. Judge is now 10-23 in two seasons as a head coach. Historically, John Mara, the Giants’ co-owner, prefers to simply reshuffle the front-office deck and hire familiar faces. Given how far the franchise has fallen, a complete fumigation might be in order.