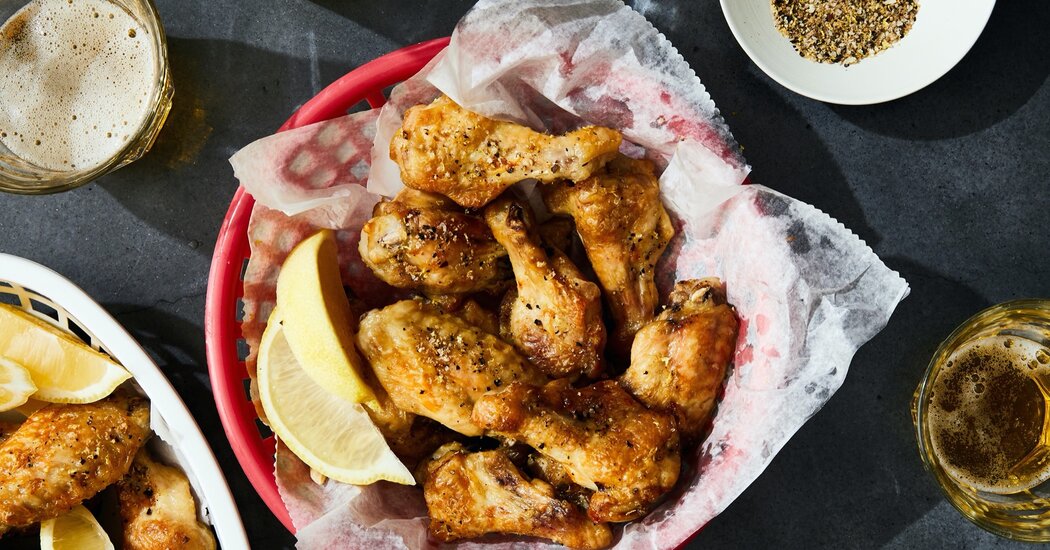 Good morning. Eric Kim tells the story of lemon-pepper chicken wings this week in The New York Times Magazine, tracing Atlanta’s favorite flavor down all the Peachtree Streets and Boulevards and into the kitchen of the Magic City strip club. He emerged with a recipe for the wings that’s all his own (above), as much Korean as Atlantan, with deliciousness to spare.

“There is a seamless convergence between Atlanta’s hot-wing culture and Korea’s fried-chicken culture,” Eric wrote, “an emphasis on shattering crispiness and a balance in flavors, most notably the lip-smacking teeter-totter of sour and sweet.” True. I hope you’ll make his wings this weekend.

But not only them! You could use Eric’s lemon-pepper seasoning on salmon fillets or shrimp, or on thinly sliced bulgogi beef. It tastes good on pizza, too, he reports, and I don’t doubt it. (Lemon pepper is also a secret weapon in this terrific Italian American salad.)

Now, it’s nothing to do with shortbread or farro, but I’ve been combating the feeling that I’ve come to the end of the internet by returning to the practice of reading physical books. And love him or hate him, that’s what a hardcover Jonathan Franzen provides: “Crossroads,” most recently. Get on it.

Also, physical magazines! I’d forgotten how beautifully designed New York magazine is, in print. Reading it is like looking at the inside of a Swiss watch.

Andrew Durbin on the state of the gay bar, in the London Review of Books, got me to pull up Electric Six’s excellent song “Gay Bar,” worth listening to really loud.

Finally, do check out Dylan Johnston’s photographs of Burmese python hunters in the Florida Everglades, in the Oxford American. People get up to the most remarkable things. Have a great weekend. I’ll see you on Sunday.