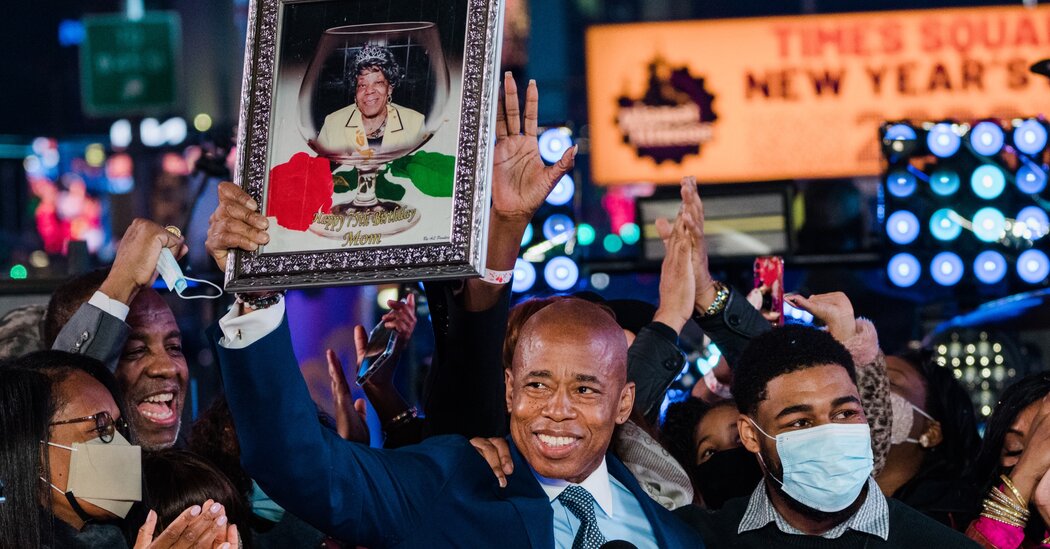 On New Year’s Day, when Eric Adams was sworn in as the 110th mayor of New York City, in his right hand he raised high above his head a framed portrait of his mother, Dorothy Mae Adams-Streeter, pictured in a brandy snifter. His left hand rested over her Bible, where she kept notes, letters and old pictures.

“I was raising my right hand, lifting her up, as she lifted me up,” Mr. Adams said in an interview. “Who would think that eventually, because of what she instilled in her son, that he would be in Times Square, being sworn in as the mayor and holding up her photo?”

The brandy snifter portrait is as American as hip-hop, acid-washed jeans and plastic-covered sofas. A photo in that style could conjure the same feelings that oversize shoulder pads or a Jheri curl would: cringe. In 2001, the motif was spoofed by “Saturday Night Live” in a skit that featured Alec Baldwin and Jimmy Fallon, called “Put It in a Brandy Snifter.”

But in the 1980s and 1990s, the brandy snifter photo was an innovative, attainable luxury, and it became ubiquitous in some communities. Its cultural significance is closely tied to the ambitions of the American working class.

Mr. Adams’s tribute to his mother also honored the countless other people who see that image and immediately recognize and identify with it, as I did. In 1995, my siblings and I had our own brandy snifter portraits taken at our local CTown supermarket on 135th Street and Broadway.

I wore my peach Easter dress from earlier that year. My mother tied my hair in a ponytail and curled my bangs to the side. My siblings wore polo shirts. The day before, I had applied a glow-in-the-dark, temporary tattoo I got in a box of Rude Dudes bubble gum to my cheek. My face has never been scrubbed harder than Mom scrubbed it clean that day.

We had to be spotless. The front of our CTown turned into a photo studio only once a year, from what I remember.

The makeshift studio where a photographer from Sears took our portraits was in an entryway where the shopping carts were usually stored, my mother told me recently. The backdrop was light blue, and the area smelled like bread. When we got the photos back some time later, our small cherubic faces were trapped in brandy snifters and adhered onto a plaque made from a composite that resembled wood. Mom still keeps the plaque on her dresser.

While now it might seem crass to place the portrait of a child in an image of a brandy snifter, for my mother it was an opportunity to provide us with something that she never had: a photo shoot.

I have never seen photos of my parents as children. During their youth, cameras and photos were not in reach for the poor in the Dominican Republic, where they were raised. It was important for my mother to capture us professionally in this way. The portraits were her aspirations for her children to have more than she did, manifested in a photo.

It is the same ambition, that of Black and immigrant working-class communities, the heart of the Democratic base and New York City, that won Mr. Adams the mayoral election last year. The photo illustrates what he told voters during his victory speech: “I am you. After years of praying and hoping and struggling and working, we are headed to City Hall.”

The choice to hold that photo while he was sworn in was more than a salute to his mother; it was a knowing nod to the communities that have been sometimes shut out by city government but continue to toil for progress.

“I wanted everyone to look at that photo and think about their parents and see that we all want the same thing,” Mr. Adams said.

Earlier this week, Mr. Adams was criticized for calling low-wage workers “low- skill workers.” The mayor later said that his critics had distorted his message. On Twitter, he reminded those who were offended by his comments that he was once a low-wage worker.

“I was a cook. I was a dishwasher. If nobody came to my restaurant when I was in college, I wouldn’t have been able to survive,” he wrote.

It is that part of his identity that is connected to these simple, antiquated portraits. Brandy snifter photos were a special occasion, something to get dressed up for.

At a celebration of her 75th birthday in 2013, Dorothy Mae Adams-Streeter, then a retired housekeeper, arrived, dressed to the nines in a bone-colored blazer with a black trim and a silver tiara atop her head.

Inside the Sugar Hill Restaurant & Supper Club on Nostrand Avenue in Brooklyn, they served smothered chicken, ribs, cornbread, collard greens with smoked turkey and macaroni and cheese. The O’Jays played from speakers, according to Aaron Freeman, who now runs the restaurant that his father, Eddie Freeman, opened in 1942.

“She welcomed everybody with open arms,” Aaron Freeman said. “As you can see, she’s just the rock of the family.”

In her portrait, her smile, captured that evening, is one of delight.

“I remember the day like yesterday,” Mr. Adams said. “She cleaned houses and did all sorts of work just to make sure she could provide for her children. To be able to take a day and do for her was a great moment.”

In the 1980s, when this legacy style of photography became popular, photos were not as pervasive as they are today. Digital cameras were not affordable for everyone, and there were no camera phones. The film in simple point-and-shoot cameras could easily be overexposed or underexposed, ruining the image — a mishap that was not revealed until the film was developed at a photo lab.

“I was just a young kid in my 20s and early 30s trying to do something different for my clients,” Mr. Ziser said. “I heard about the brandy snifter, so I started doing it.”

Back then, Mr. Ziser used a Hasselblad 501c camera that he attached to a matte box. He would take the dark transparent slide of the brandy snifter and slide that into the matte box. He would then add another filter with a small hole in it and then photograph the subject. The second filter vignetted around the subject to make them fit in the brandy snifter. The filter allowed the photographer to create the portrait in person in real time, at an event.

“That was something really unusual in the late ’70s,” Mr. Ziser said. “It would have looked unlike anything they’d seen and of what any other wedding photographer was doing.”

The style expanded from weddings to everything from babies to couples in matching outfits, full families and even Sweet 16 parties.

Gisela Guerrero, the mother of a colleague of mine, had her portrait taken at her sister Monica’s 18th birthday debut, similar to a quinceañera, in 1984 at a ballroom in a Manila sports club.

“My mom had somebody come in and fix my hair and makeup,” Ms. Guerrero, 64, recalled. “My mother was a great cook, and she made feasts for all of our gatherings, but this was catered, this was different.”

Ms. Guerrero remembered that a photographer was at the party snapping pictures. When the party was over, there were a few images on a table near the exit.

“The guy that was taking the pictures was pretty fast because we went out and I saw my face, my image in a champagne glass or something,” Ms. Guerrero, fresh off a late shift in the administrative office at Mercy Hospital in Ohio, said earlier this week. “It was like a big thing. Other people at the party got their photo taken the same way.”

The double exposure trend is one that has made its way around the world several times by now, but in New York, it remains a piece of the Black and immigrant aesthetic.

Ms. Adams-Streeter’s portrait was taken just over eight years ago. She died last year of heart disease. Mr. Adams said the city had betrayed his mother by failing to offer her opportunities and resources, but she had a dogged will not just to prevail but prosper — a perseverance he credits for his success. When he hoisted her brandy snifter portrait in the air as he became the second Black mayor of the city, she too became a part of history.

“African-American people, they always put their pictures on a plaque, a glass, a flyer, that’s just what we do,” Mr. Freeman said. “You know, we’re superexquisite.”