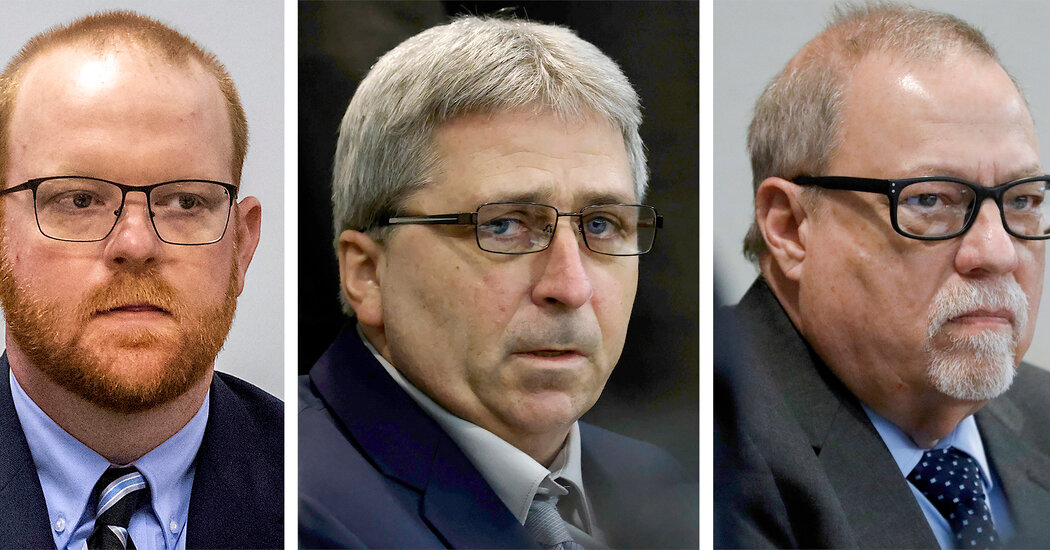 ATLANTA — A Georgia judge on Friday sentenced both Travis McMichael, the man who fatally shot Ahmaud Arbery, and his father to life in prison without the possibility of parole, but issued a lesser sentence of life with the possibility of parole to the other white man convicted of murdering Mr. Arbery, a 25-year-old Black man whom they had chased through their neighborhood.

The three men, Travis McMichael, 35, his father, Gregory McMichael, 66, and their neighbor, William Bryan, 52, were convicted of murder and other counts in state court in November, resulting in mandatory life sentences. The main question before Judge Timothy R. Walmsley on Friday was whether Mr. Arbery’s murderers should be eligible for parole after 30 years, the earliest possible opportunity for such offenders under Georgia law.

The lead prosecutor, Linda Dunikoski, asked the judge to deny the possibility of parole to the McMichaels, arguing that they had displayed a reckless history of “vigilantism” before the killing. She noted that the elder Mr. McMichael had referred to Mr. Arbery as an “asshole” as his body lay in the street and authorities responded. “There’s been no remorse and certainly no empathy from either man,” she said.

She said that Mr. Bryan should be eligible for parole in part because he had cooperated with investigators.

Before issuing the sentences, Judge Walmsley noted that Mr. Arbery had been chased for roughly five minutes while he ran from the men on foot. To illustrate the sense of time, and to emphasize the “terror” he said Mr. Arbery must have felt, the judge paused and let silence fill the room for one minute.

Judge Walmsley said the case should prompt people to consider what it means to be a good neighbor. “Assuming the worst in others, we show our worst character,” he said.

Judge Walmsley’s decision, in the same Brunswick, Ga., courtroom where the racially charged trial unfolded, closed one important chapter in the case against the men who killed Mr. Arbery, who had entered a house under construction in the suburban community of Satilla Shores on a Sunday afternoon in February 2020. The three men pursued him in a pair of trucks, suspecting him of property crimes in the area.

The chase ended when Mr. Arbery, blocked in by the trucks, clashed physically with Travis McMichael, who shot Mr. Arbery three times at close range with a shotgun. Mr. Bryan captured the slaying on his cellphone camera, and when the footage was widely distributed online, it stirred national outrage.

On Friday, Mr. Arbery’s family members gave a series of wrenching statements to the judge, arguing that the men should receive the maximum possible sentences. His sister, Jasmine Arbery, said the men mistakenly deemed Mr. Arbery to be a “dangerous criminal” because of his dark skin and curly hair.

Mr. Arbery was a jogging enthusiast, and his family has said that he had jogged into the neighborhood on the day of his death. Marcus Arbery Sr., his father, told the court, “Not only did they lynch my son in broad daylight, but they killed him while he was doing what he loved” more than anything: “running.”

Wanda Cooper-Jones, Ahmaud Arbery’s mother, noted that her son never spoke to his pursuers during the chase. “He never said a word to them, he never threatened them — he just wanted to be left alone,” she said. “They were fully committed to their crimes. Let them be fully committed for their consequences.”

The case is likely to be appealed to the Georgia Supreme Court. But in an interview this week, Ms. Cooper-Jones said she was bracing herself for the next trial, in federal court, where the three men are charged with hate crimes and attempted kidnapping, and also face potential life sentences. Jury selection in that case is scheduled to begin on Feb. 7.

“I’ll be there every day,” she said. “They need to answer to those charges as well.”

Ms. Cooper-Jones said federal prosecutors had contacted her recently and asked if she would be comfortable with a plea deal. She said she told them that she preferred to see the federal case go to trial.

Friday’s question of parole eligibility resonated differently for the three men. For Travis McMichael, it was about the possibility of being released as early as his mid-60s. But Gregory McMichael would be in his 90s if he were given the chance to go before a parole board. Likewise, Mr. Bryan would be in his 80s.

Robert G. Rubin, a lawyer for Travis McMichael, argued that his client may have acted recklessly but was trying to look out for his neighbors. Mr. Rubin said a maximum sentence for his client would constitute “vengeance,” and said that a parole board should have a chance to consider freeing Mr. McMichael.

Laura D. Hogue, a lawyer for Gregory McMichael, said he had no criminal record and had committed “thousands” of acts of kindness in his lifetime.

Kevin Gough, a lawyer for Mr. Bryan, noted that his client had publicly expressed remorse. Mr. Gough made what he admitted was a long-shot argument that the judge should consider a sentence for Mr. Bryan that was effectively more lenient than the mandated minimum.

At trial, defense lawyers argued that Travis McMichael had acted in self-defense when he shot Mr. Arbery. They also argued that the pursuit of Mr. Arbery was legal under a citizen’s arrest law that was later significantly dismantled by Georgia lawmakers.

Prosecutors had given strong indications before the trial that they would make racism an important component of their case. But in the end, several allegations of racism were not introduced to the nearly all-white jury, either for strategic reasons or because of hurdles presented by the rules of evidence.

Instead, the lead prosecutor, Linda Dunikoski, made a plea to jurors’ sense of basic fairness, and argued that the men had violated rules of common sense when they decided to take the law into their own hands. One of the few hints of racial motive came in her closing argument, when she said Mr. Arbery had been attacked “because he was a Black man running down the street.”

But the accusations of racism that jurors never heard in the state case could potentially be introduced next month in federal court. They include photographic evidence of Travis McMichael’s truck, which was adorned with a vanity plate with the design of the old Georgia state flag, which incorporates the Confederate battle flag.

Court records show that prosecutors had considered introducing what they described as other “racial” evidence, including Facebook posts or text messages from the three men. In a pretrial hearing, prosecutors read a text message from November 2019 in which Travis McMichael used a racist slur about Black people as he described the idea of shooting a “crackhead” with “gold teeth.”

In a federal court filing in late December, the lawyer for Mr. Bryan asked the court to exclude evidence that suggested Mr. Bryan had “racial animus” toward Black people, including racially insensitive text messages he made around the Martin Luther King Jr. holiday, and witness testimony “that would suggest Bryan did not approve of his adopted daughter dating an African American man.”

A Georgia state investigator has said that Mr. Bryan told authorities that he heard Travis McMichael use a racist slur shortly after shooting Mr. Arbery. Mr. McMichael’s lawyers dispute this claim. That allegation may be difficult to bring before a jury if Mr. Bryan declines to take the witness stand, which would deny Travis McMichael his constitutional right to cross-examine a witness against him.

According to Justice Department statistics, more than 90 percent of hate crime defendants adjudicated in U.S. district court between 2005 and 2019 were convicted. But Page Pate, a Georgia lawyer and legal analyst, said this trial could prove to be challenging for prosecutors. Racist statements alone, he said, would not be enough to secure a conviction.

“Proving somebody’s a racist doesn’t make it a hate crime,” he said. “You’ve got to show that the crime was connected to those feelings.”

In addition to hate crimes, the federal indictment that was issued in April also charges the three men with attempted kidnapping. Both of the McMichaels armed themselves before chasing Mr. Arbery, and both are charged with using a firearm during a violent crime.