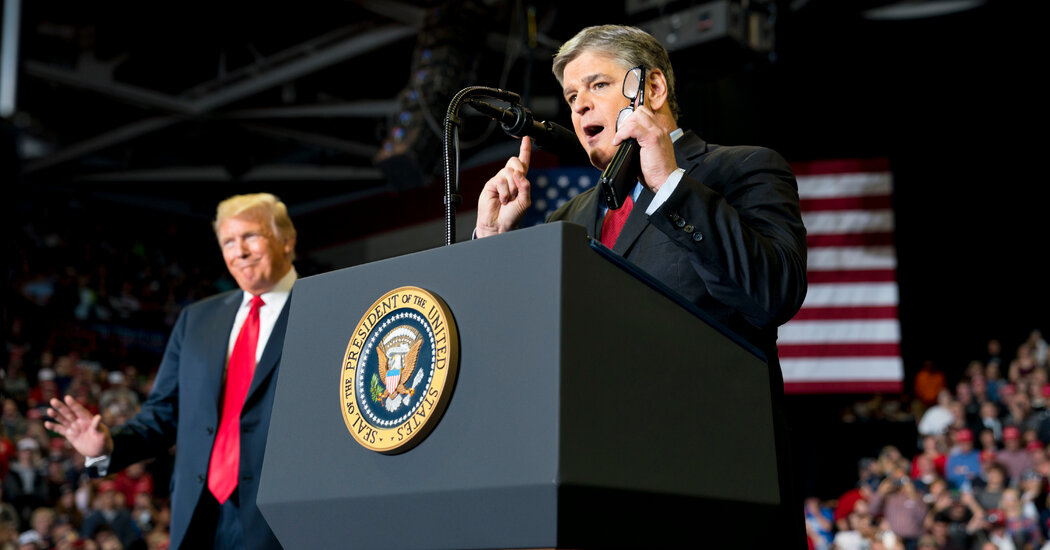 The House committee investigating the Jan. 6 attack on the Capitol has requested that Sean Hannity, the star Fox News host, respond to questions about his communications with former President Donald J. Trump and his staff in the days surrounding the riot.

In a letter on Tuesday, the committee asked for Mr. Hannity’s voluntary cooperation, meaning that the host has not received a formal subpoena. The letter detailed a series of text messages between the conservative media star and senior officials in the Trump White House, illustrating Mr. Hannity’s unusually elevated role as an outside adviser to the administration.

The texts suggest that Mr. Hannity was aware of, and deeply concerned about, what Mr. Trump was planning for Jan. 6, and bracing for a possible mass resignation of top White House lawyers as a result.

“We can’t lose the entire WH counsels office,” Mr. Hannity wrote to Mark Meadows, the White House chief of staff, in a Dec. 31, 2020, text message that the committee included in its letter. “I do NOT see January 6 happening the way he is being told.”

They also indicate that the Fox News host, a longtime confidant of the former president, had knowledge of a flurry of high-level conversations at the White House, involving Mr. Trump himself, about leaning on Vice President Mike Pence to use his ceremonial role in Congress’s official electoral count to keep Mr. Trump in office.

The texts were included in a trove of 9,000 pages of documents Mr. Meadows turned over to the panel in response to a subpoena.

As Mr. Trump grappled with the political fallout of the attack — including a looming impeachment inquiry and rebukes from some top Republicans — Mr. Hannity wrote on Jan. 10 to Mr. Meadows and Representative Jim Jordan, an Ohio Republican and a key ally. “He can’t mention the election again. Ever,” Mr. Hannity said in the message, referring to Mr. Trump. “I did not have a good call with him today. And worse, I’m not sure what is left to do or say, and I don’t like not knowing if it’s truly understood. Ideas?”

A lawyer for Mr. Hannity, Jay Sekulow, said on Tuesday that the committee’s request “would raise serious constitutional issues including First Amendment concerns regarding freedom of the press.” Fox News referred inquiries to Mr. Sekulow’s statement.

The letter from the committee informed Mr. Hannity that it believed the Fox News host “had advance knowledge regarding President Trump’s and his legal team’s planning for Jan. 6,” calling him “a fact witness in our investigation.” The committee wrote that it had obtained “dozens of text messages” between Mr. Hannity and members of Mr. Trump’s inner circle, including a note on Jan. 5 in which Mr. Hannity expressed concern about the next day’s counting of Electoral College votes.

“I’m very worried about the next 48 hours,” Mr. Hannity wrote.

Mr. Hannity was one of several Fox News stars who became informal confidants to Mr. Trump over the course of his administration, frequently conversing with the president by telephone and over meals in the White House.

“He was more than a Fox host; he was also a confidant, adviser, campaigner for the former president,” Representative Adam B. Schiff, a California Democrat and member of the committee, said on MSNBC on Tuesday.

Last month, the committee revealed that Mr. Hannity had contacted Mr. Meadows on Jan. 6 as rioters overtook the Capitol, asking: “Can he make a statement? Ask people to leave the Capitol.” The Fox News stars Laura Ingraham and Brian Kilmeade sent similar notes asking that Mr. Trump take steps to quell the violence. In Fox News prime time on Jan. 6, Mr. Hannity told his viewers that “all of today’s perpetrators must be arrested and prosecuted to the fullest extent of the law,” adding: “Every good and decent American, we know, will and must condemn what happened at the Capitol.”

A spokesman for the committee declined to say on Tuesday if additional Fox News hosts would be asked to answer questions. Mr. Hannity is the most prominent media star so far that the committee has contacted about testifying. The committee previously issued a subpoena for the conspiracy theorist and Infowars host Alex Jones, who has sued the committee to try to stonewall the investigation.

The letter to Mr. Hannity was signed by Representative Bennie Thompson, Democrat of Mississippi and the committee chairman, and its vice chairwoman, Representative Liz Cheney, Republican of Wyoming.

“We have no doubt that you love our country and respect our Constitution,” Mr. Thompson and Ms. Cheney wrote. “Now is the time to step forward and serve the interests of your country.”