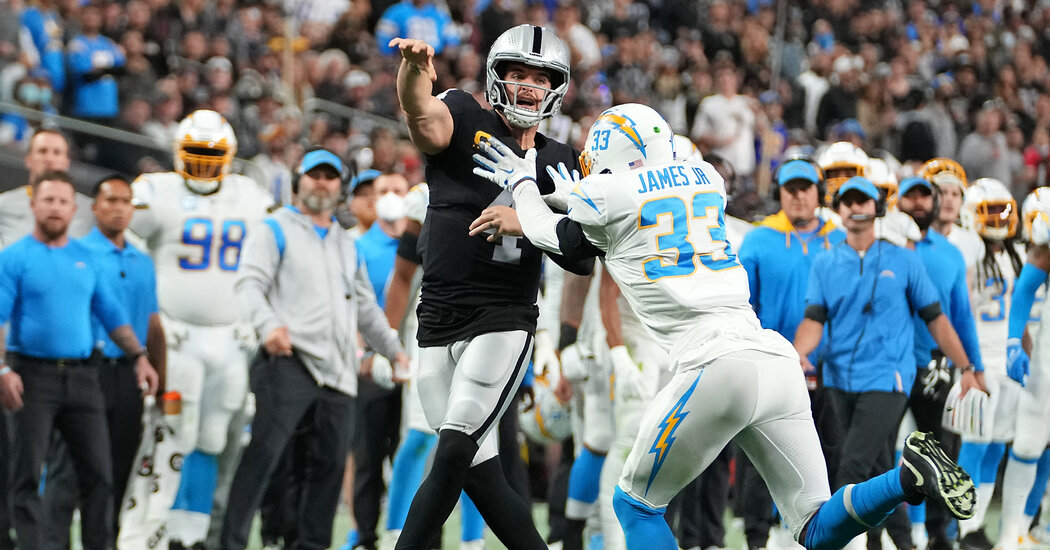 “We were certainly talking about it on the sideline,” Bisaccia said.

On third-and-4 from the Chargers’ 39-yard line, Jacobs rushed for 10 yards setting up a Daniel Carlson 47-yard, walk-off field goal. As the ball sailed through the uprights, Raiders defensive end Maxx Crosby threw his helmet and ran onto the field in excitement. Carr, who threw for 186 yards and two touchdowns, later pumped his hands as he walked off the field and hurled a game ball into the crowd.

The Raiders’ win gives them a coveted slot in the postseason, faced with a road matchup against the No. 4-seed Cincinnati Bengals. But Las Vegas’s persistence, winning their final four games to advance to the postseason under an interim coach and with a shell of its season-opening roster, exemplified the possibility offered by a stretched out schedule.

The 2021 season was again dogged by Covid-19-related player absences, which resulted in cobbled together lineups and unexpected losses, and many of the league’s juggernauts — Patrick Mahomes’s flashy Kansas City offense, the Dallas Cowboys — suffered swoons that stretched out to imperil their standings. The added game gave those playoff-bound high seeds the opportunity to revert to form, perhaps none so much as the Raiders, who as late as mid-December were under .500.

“Every single week you got to be ready to go to be at your best” said Crosby, who finished with six tackles and two sacks. His white arm sleave and white pants were plastered with green grass stains from Allegiant Stadium’s surface. “I love it, there’s nothing else I would want.”

The playoff berth had seemed unlikely for the Raiders, who have been roiled by calamity this season. The team’s head coach, Jon Gruden, resigned in October after The New York Times and Wall Street Journal reported on racist and homophobic emails he sent from 2011 to 2018, when has an ESPN analyst. Weeks later, the team released Henry Ruggs III, a first-round draft pick in 2020, after the receiver crashed his sports car into the vehicle of Tina Tintor, 23, killing her when her car burst into flames. He was charged with two felony counts of driving under the influence and two felony counts of reckless driving.

The team also released another 2020 draft pick, cornerback Damon Arnette, in November after he brandished a gun on social media and threatened to kill someone. Nate Hobbs, a cornerback, was also charged with driving under the influence, a misdemeanor, last week after he fell asleep in his vehicle at a parking garage.

The rapid succession of incidents raised outside amplified the Raiders’ football struggles. Limping to a 3-5 record in Bisaccia’s first eight games left long odds for the Las Vegas team, but three wins in games decided by one score — sloppy outings against the Covid-ravaged Browns, the Colts and the Broncos — lifted them into the race.