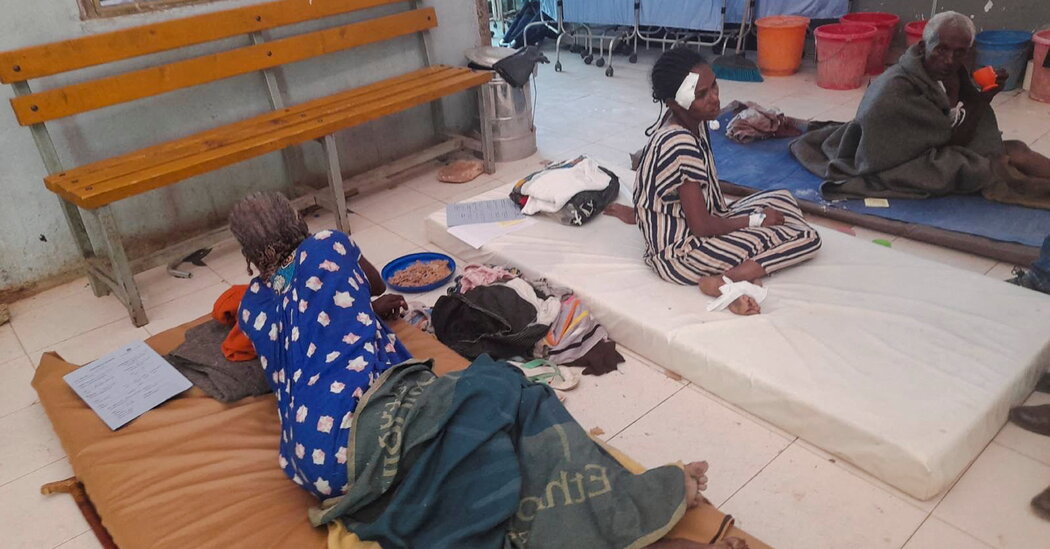 NAIROBI, Kenya — On the same day that President Biden spoke with his Ethiopian counterpart, Abiy Ahmed, about a possible window for peace in the long-running war in Tigray, at least 17 people, including women and children, were killed in an airstrike, aid workers said.

The strike on Monday came days after dozens more were killed after a drone opened fire on a refugee camp in Ethiopia’s northern region of Tigray and highlighted the increasingly deadly role of armed drones, some supplied by American allies, in a conflict that has badly destabilized Africa’s second most populous country.

Video from the aftermath of the strike on Friday, provided by aid workers, showed the charred bodies of women and children laid out on blue plastic sheeting bearing the United Nations logo. On Monday the U.N. secretary general, António Guterres, said he was “deeply concerned” about the attack, which occurred hours after the Ethiopian government issued a call for “national reconciliation.” At least 50 people had been killed, he said.

Prime Minister Abiy stoked hopes for a cease-fire on Friday with the release of prominent political prisoners, including a founding member of the Tigray People’s Liberation Front, or T.P.L.F., which Mr. Abiy’s government has been fighting since November 2020.

On Monday, in their first direct conversation as leaders, Mr. Biden called Mr. Abiy, winner of the 2019 Nobel Peace Prize, to urge him to “accelerate progress toward a negotiated ceasefire” and open up humanitarian access across the country, the White House said in a statement.

The prisoner releases, and Mr. Abiy’s calls for a national dialogue, present “a moment of opportunity, if the parties are willing and able to seize it,” a senior administration official who spoke on condition of anonymity told reporters in a briefing about the conversation. Mr. Biden also expressed his concern about civilian deaths from airstrikes.

But hours later, news filtered through of another attack.

Missiles slammed into a flour mill in Mai Tsebri, in the Tigray region, on Monday afternoon, killing at least 17 people and wounding dozens, aid workers with two organizations and local officials said. Witnesses reported seeing drones in the skies before the strike, they said.

Most of the dead were women who had gone to the mill to grind cereals, according to an internal United Nations report cited by one aid worker.

The aid workers spoke on the condition of anonymity to avoid reprisals from Ethiopia, which expelled several U.N. and international aid officials last year, and has detained numerous journalists including a video journalist accredited to the Associated Press arrested last month.

Col. Getnet Adane, a spokesman for the Ethiopian military, referred questions about the airstrikes to the Ethiopian government spokesman, who did not respond.

A mediator appointed by the African Union, Olusegun Obasanjo, a former president of Nigeria, flew into the Tigrayan capital Mekelle on Tuesday morning, two Western diplomats said. Hours later, gunfire rang out across the city as Tigrayan antiaircraft guns opened fire, apparently in reaction to drones circling overhead, an aid official in the city said.

The United States has repeatedly called on Eritrea, whose troops are fighting in Tigray in support of Mr. Abiy, to withdraw their forces — a call reiterated by the senior American official who briefed reporters on Monday.

But the official declined to comment on the role of other countries accused of fueling the fighting, including the United Arab Emirates — a major American ally.

Powerful Chinese-built drones supplied by the U.A.E. to Ethiopia, as well as less powerful models supplied by Turkey, played a major role in a string of dramatic battlefield victories by Mr. Abiy’s forces in December, Western officials and analysts said.

Understand the Conflict in Ethiopia

Rebels turned the tide. Despite Mr. Abiy’s promise of a swift campaign, the Ethiopian military suffered a major defeat in June when it was forced to withdraw from Tigray. The fighting subsequently moved south.

Tigrayan forces close in. In late October, Tigrayan rebels captured two towns near Addis Ababa, the nation’s capital. The government declared a state of emergency and called on citizens to arm themselves.

Since August, Ethiopia has also acquired drones from Iran. Websites that track international flights have detected cargo flights into Ethiopia from Chengdu, the Chinese city where the powerful Wing Loong drone is manufactured.

It is unclear which armed drones carried out the latest deadly strikes in Tigray, but supplies of military equipment are increasingly becoming a focus of international efforts to halt the fighting.

The United States pressured the U.A.E. to stop an earlier round of drone strikes in the opening weeks of the war, foreign diplomats say. Last week the White House appointed a new special envoy to the Horn of Africa, David Satterfield, to replace Jeffrey Feltman.

Mr. Satterfield is currently the American ambassador to Turkey and has raised the issue of recent sales of armed drones to Ethiopia with Turkish officials, officials say.

The drone war comes against the backdrop of a soaring humanitarian crisis. At least 9.4 million people in northern Ethiopia urgently need help, the U.N. says, but a government blockade has prevented vital supplies of food and medicine from reaching Tigray, where the majority live.

Less than 12 percent of required supplies got through between July and December, according to the U.N., and last week doctors at Tigray’s main hospital issued a desperate appeal for basic supplies including antibiotics, surgical gloves and medicine to treat cancer.

“We are just counting deaths that happen due to totally preventable causes,” Mussie Tesfay, administrator of the Ayder Referral Hospital, said in an email. “It is just so heartbreaking to see our beloved patients die one by one.”