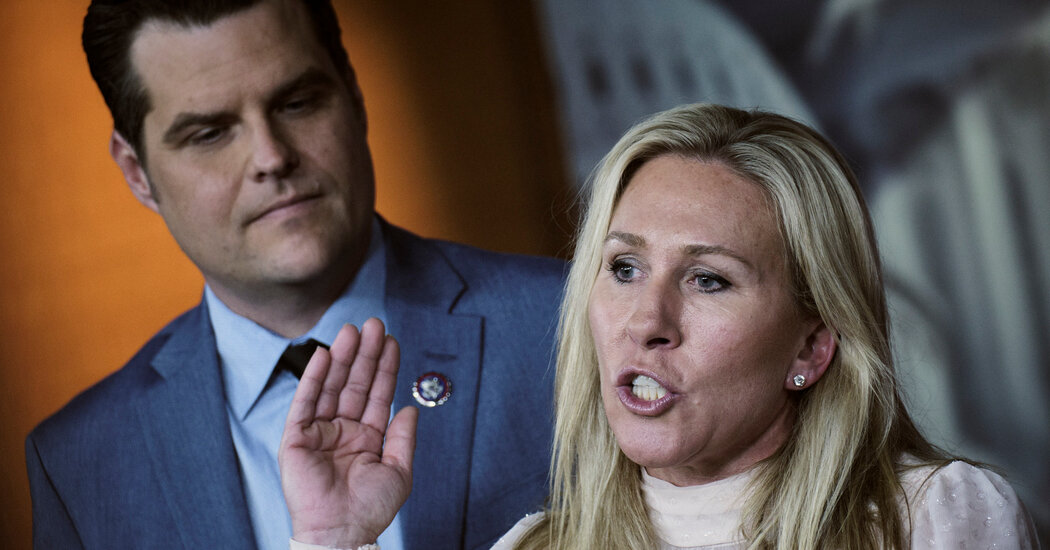 Around the same time President Biden said former President Donald J. Trump encouraged the violence that took place at the Capitol on Jan. 6, some of Mr. Trump’s most prominent supporters deflected blame for the attack during an appearance on a live online show.

On the show, hosted by Stephen K. Bannon, one of Mr. Trump’s top former advisers, Representatives Matt Gaetz and Marjorie Taylor Greene laid responsibility on Democrats, the Capitol Police, the federal government and others.

The idea that people other than Mr. Trump’s own supporters were responsible for the violence that day has become a popular conspiracy theory among the far right. There is no evidence that undercover agents or other outsiders played a role in the attack and fact checkers have worked to debunk similar claims aired on Fox News. The pair of lawmakers offered little evidence for their claims during the show.

Mr. Gaetz, a Florida Republican, repeated some of the unfounded claims on Thursday, including that the government and police tried to set up the protesters.

“We’re here to get to the truth behind Jan. 6, the federal government’s own involvement with it,” Mr. Gaetz said in his hourlong interview on “Bannon’s War Room.”

Mr. Gaetz said that if Republicans took control of Congress after this year’s midterm elections, he would take over the Jan. 6 committee investigating what happened, make Ms. Greene the committee chair, and use it to outline the role federal agencies played in the attack.

Ms. Greene, a Georgia Republican, dismissed the idea that hundreds of arrests were meaningful and suggested looking into Speaker Nancy Pelosi’s phone records. She also questioned the number of Capitol Police present that day.

Twitter permanently suspended Ms. Greene’s personal account on Sunday after the company said she repeatedly violated misinformation policies about Covid-19. She addressed the ban on the show, calling it “a direct attack” on the government.

“I don’t want to alarm anyone,” she said. “I think that our country is already gone. I think we’re post-Constitution, and I think China is absolutely ahead of us.”

Mr. Bannon’s podcast has become hub for right-wing thought after the Jan. 6 raid on the Capitol. It was flagged in a Brookings Institution analysis for sharing more misinformation about the election than other top political talk shows on Apple Podcasts.

A Love of Trees or a Display of Power? The Odd Park of an Oligarch

Jodie Ginsburg, a Fighter for Press Freedom, Is Expanding Her Battle