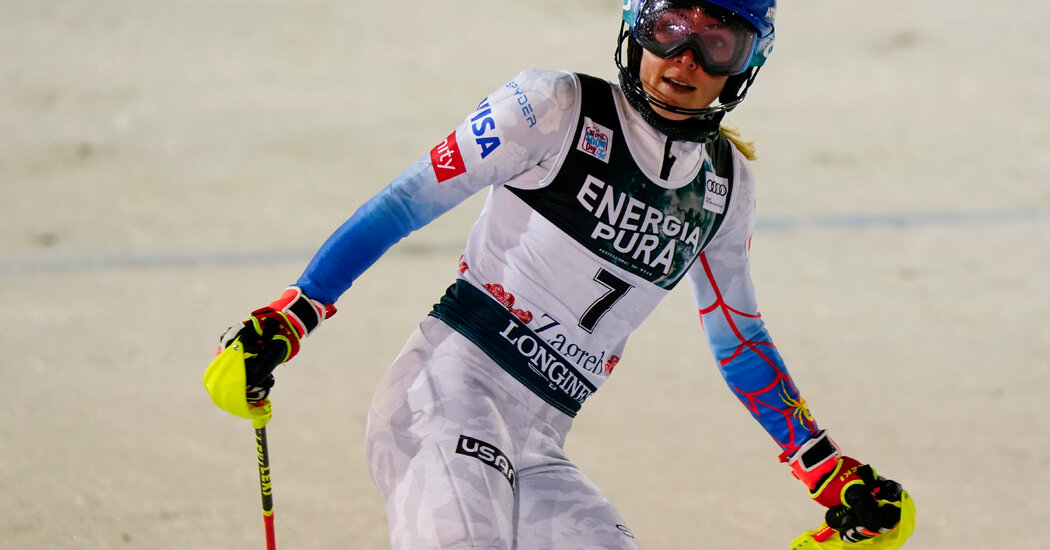 Thursday afternoon, roughly one month from the Beijing Olympics opening ceremony, Mikaela Shiffrin was still a bit out of breath from a slalom training session in Austria. But it felt good, and not just because Shiffrin, an eight-time Olympic and world champion, is once again atop the Alpine World Cup overall standings.

“I finally feel like myself again,” she said in a phone interview.

Ten weeks ago, as she sat in the kitchen of her Colorado home, Shiffrin all but predicted her comeback after nearly two years mourning the accidental death of her father, a series of nettlesome injuries and uneven results (by her record-setting standards). She was also peeved that some in the ski racing community had already began writing her off.

“Like, seriously people, how quick are you to forget?” she said, her voice rising. “When a devastating thing happens, it’s like coming back from a significant injury. I hadn’t lost my ability or lost my fire, I was just healing, OK?”

As Shiffrin, 26, prepares for the Beijing Games, she has weathered a race season vastly different than the ones that preceded her appearances at the 2014 Sochi Olympics, when she became the youngest slalom gold medalist, or the 2018 Pyeongchang Olympics, when she won gold and silver medals. For example, last week, because of a positive coronavirus test, she spent nine days quarantined in Central Europe — “mostly sitting around or lying down in a room,” she said — and prohibited from any exercise that would raise her heartbeat or breathing rate. Barred from going outside, she gingerly flexed two fitness bands and gently lifted a kettlebell.

Then, on Tuesday, a day after she was cleared to return to the World Cup circuit, she was in the start gate of a long, challenging slalom in Zagreb, Croatia, and wondered: “If I stop halfway to rest, would anybody mind?”

Get Ready for the 2022 Beijing Winter Olympics

Just months after Tokyo, the Olympics will start again in Beijing on Feb. 4.

Shiffrin finished second to her chief rival, Petra Vlhova, but she bested Vlhova, and nearly the entire field, in the second run of the event. It was the kind of charging closing run that had been Shiffrin’s hallmark — until last season when she uncharacteristically lost some first-run leads at the halfway mark of races.

Thursday, Shiffrin acknowledged there had been a noticeable shift in her performances this season. It is part of what she means when she says she is feeling like herself again. At last year’s Zagreb race, for instance, Shiffrin said she was distracted and sad between runs, something that happened frequently since her father’s death on Feb. 2, 2020.

“It was like somebody was stabbing me right in my chest for the entire race day,” she said. “I was sitting apart from everyone and I remember thinking that they probably think that I’m so sad right now because I’m not winning, but I don’t even want to be here racing at all.”

Shiffrin began seeing a sports psychologist last summer and said it is now easier to compartmentalize her emotions and reset her attention on skiing when she’s training or racing.

“For a while now I’ve able to refocus my mental and emotional energy on my skiing again and that’s been really important,” she said. “Because that’s a skill I’ve been able to do for my whole career. So that’s come back very well, and made a big difference.”

This season, Shiffrin, whose 72 World Cup victories are just 14 short of Ingemar Stenmark’s career record of 86, has also done something few of her colleagues can claim, which is to race in every World Cup discipline — slalom, giant slalom, super-G and downhill. Moreover, in what could be one of the biggest Alpine Olympic story lines in Beijing, she still hopes to keep her preseason goal of racing in all five events there, an even rarer feat that Shiffrin has yet to achieve. The fifth Alpine Olympic event is the combined, in which the times from one run of slalom and one downhill run are combined.

Entering every event at the 2022 Games could have historic consequences. If the Olympics were held this weekend, Shiffrin would be a serious contender for four medals. Janica Kostelic of Croatia holds the women’s record for most medals at one Olympics with three. Kostelic and Anja Paerson of Sweden hold the women’s Olympic record for most medals in a career with six. Shiffrin already has three Olympic medals, including two gold. No American skier, male or female, has won more than two Olympic gold medals.

On Thursday, Shiffrin, whose World Cup season resumes with two races in Slovenia this weekend, said there was only one uncertainty to her entering five Olympic events.

“The downhill is sort of up in the air,” she said. “But we can’t really figure that out until we get there and do some training runs and see what my speed is on that track. That’s going to be like a game-time decision.”

“Mikaela would love to do it and I’m excited for it,” she said of the five-event schedule. “But it comes with an asterisk because all the men’s and women’s races are condensed into two weeks. If you get delayed races, which happens often, your plans can easily get derailed.”

Preparing to drive from Austria to Slovenia on Friday, Shiffrin remained upbeat. The drumbeat of the four-year Olympic cycle thumps loudest in the final month leading up the Games but Shiffrin found optimism even in her Covid-19 diagnosis. Her recovery could make it far less likely she will test positive for the virus during the Games.

“Honestly, I should be one of the safest people now,” she said with a laugh. “But I’m not taking any chances. I’ve been wearing my mask everywhere. Like, everywhere.”