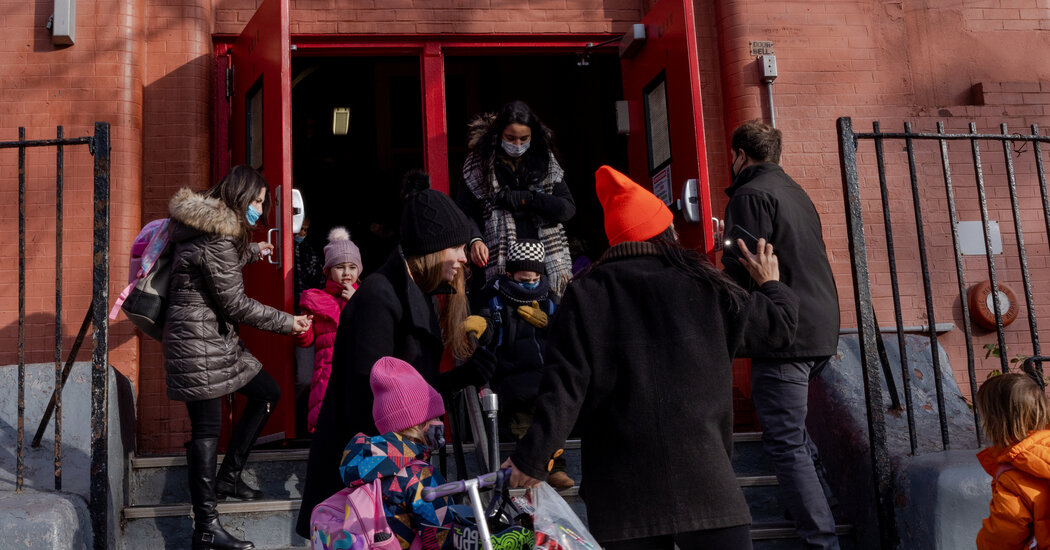 The first week of school after the holiday break in New York City left many of the city’s roughly 80,000 educators and well over one million parents with a deeply uncomfortable and familiar feeling — that the profound uncertainty that pervaded the city’s fitful 18-month school reopening process had returned.

Schools in the nation’s largest district opened as planned on Monday, amid an extraordinary rise in cases fueled by the highly contagious Omicron variant, which has again turned New York into a coronavirus epicenter. A new testing system went into effect this week, with rapid tests available in every school. Attendance hovered around 70 percent throughout the week.

In two dozen interviews with parents, teachers and students this week, New Yorkers were divided over whether schools should currently be open for in-person learning, but most echoed a familiar feeling of unease.

Matt Baker, a high school math teacher at Brooklyn Latin School, which straddles Williamsburg and Bushwick, said the week had been chaotic. “We’re trying to help kids that aren’t here, but also the kids that are here,” he said. “It’s not clear how long they’re going to be out, we’re just trying to get by.”

“I’m happy that schools are open in general,” Mr. Baker said. “I’m just not convinced that they should have opened this week.”

Mayor Eric Adams, who took office just two days before schools reopened after the winter break, has been adamant that the system will remain open despite the surge in virus cases and hospitalizations.

New York has been more aggressive than many other large cities in keeping its schools open. That policy has been supported by many public health experts and parents whose children struggled during virtual schooling, although some parents say they would prefer a longer-term remote learning option.

The reopening had so far been largely successful, as in-school virus transmission was extremely low in the year or so from when schools began to reopen to when Omicron hit. But the contagiousness of the variant presents a unique challenge, and keeping schools safe — while reassuring families and educators — has emerged as the first major test of leadership for the new mayor.

“The safest place for children is in a school building,” Mr. Adams said during a television interview on Thursday. “There’s no getting around that. That’s the science, that’s the fact. That is not spreading fear.”

Speaking at a news conference on Friday, the mayor said he wanted to provide parents with clarity that schools would be open and stay open, after a string of delays and changes to the school reopening plan.

He and others have pointed to all the ways in which conditions are different than they were earlier in the pandemic.

New York’s educators were given access to vaccines nearly a full year ago, before some immunocompromised people and other vulnerable groups. All adults working in city buildings are required to be vaccinated. Nearly all city schoolchildren are eligible for vaccines, although over half have not received a shot.

There is also much less political friction with the city’s teachers’ union than there was earlier in the pandemic; Mr. Adams and Michael Mulgrew, president of the United Federation of Teachers, have said they are working together closely to keep schools open.

Solange Farina sent her daughter, a high school freshman, back to school in the Chelsea neighborhood of Manhattan this week. Ms. Farina, who lives in Astoria, Queens, said she didn’t feel nearly as frightened as she did when schools first shut down in the spring of 2020. “But I definitely don’t feel hopeful like I did last June, before Delta,” she said.

“I’m kind of going day by day,” she said. “It’s just stressful living in this moment.”

Attendance data from this past week demonstrated the moment’s challenges. About a third of parents kept their children at home to learn virtually.

Interviews with parents around the city highlighted the divide that exists among them.

Standing outside Public School 112 in East Harlem this week, Erica Alvarez said supervising remote learning for her 7-year-old son earlier in the pandemic was “one of the hardest periods” of her life.

This week, she said: “So far, everything is all right. They have made me feel comfortable.”

But a few blocks away at Public School 155, Yamzi Aquino was waiting to pick up his 8-year-old son. He was nervous about his child being back in classrooms.

“I’d rather him be healthy and happy and wait,” Mr. Aquino said. “You’re risking too much.”

Case numbers in schools have been significantly higher in the last three weeks than at any other moment of the pandemic. The city’s virus-tracing system for schools, known as the situation room, reported more than 13,000 positive cases among staff and students on Thursday.

Still, city officials cautioned that a majority of those cases were reported during the holiday break, when children were not in school, and that they were part of an enormous backlog in case reporting. The city also started tabulating the results of rapid at-home tests, not only laboratory-confirmed P.C.R. tests, for the first time this week.

In an effort to make families and educators more comfortable about returning to classrooms, the city ramped up its school testing protocol in the final week of former Mayor Bill de Blasio’s tenure.

Among the changes: 1.5 million rapid at-home tests have been distributed to schools and entire classrooms no longer have to quarantine when someone tests positive. And students and staff members can return after an exposure as long as they receive two negative at-home test results over five days.

Elana Rabinowitz, a middle-school teacher in the Fort Greene neighborhood of Brooklyn, said she was relieved to find testing kits and a KN95 mask waiting for her when she returned to her school building this week. She was assured that there would be enough of a supply to test herself twice a week.

“That gave me some faith that someone was in charge,” she said.

But Ms. Rabinowitz said the staff shortages that her school and many others were experiencing because of positive cases were unsustainable. On Friday, she said, about half of the staff was absent, and there were just a handful of students in most classrooms.

“As usual we are wearing all the various hats to keep the school running. In a beautiful way, people have come together,” she said. “However, it’s like taking blood from a stone. All that we have been through and all that we are continuing to work with, we’re already exhausted.”

Despite staffing issues in many schools, the city kept all but one of its 1,600 schools open this week. The principal of one school, Public School 58 in Brooklyn, told parents on Sunday night that she would close the school the next day, without permission from the Department of Education. It was back open by Tuesday.

The city does not yet have data on employee attendance this week. During a news conference on Friday, David C. Banks, the schools chancellor, said the number of staff members in school had been “lower than we wanted to see.” He added that he expected both student and staff attendance to increase next week.

But the fact that schools have been open does not mean they are operating normally.

Pilar Lu-Heda, 17, a high school senior who lives in Prospect Heights, Brooklyn, and who attends school in Manhattan, said her first day back was “definitely a little bit eerie” because so many students had not returned.

“Usually it feels like there’s a lot of voices, a lot of people,” she said. “But today there was a lot of awkward silence because everyone could feel there was a lack of students.”

Some of Pilar’s teachers have even held off on covering parts of their lessons, she said, choosing to save them for when more students return. But her teachers don’t always seem to know when that will be, she said.

Pilar said that three of her close friends were recovering from the virus after contracting it over the holidays, and that she would feel safer switching to remote learning until case levels began to drop.

Mr. Adams and Mr. de Blasio said last week that New Yorkers should be reassured by the fact that the city would double the size of its P.C.R. surveillance testing program in schools, randomly testing 20 percent of consenting students in each school weekly instead of 10. But that announcement now appears more aspirational than factual.

This week, parents and educators said they discovered that the city was actually determining the number of students tested in a given school based on the percentage of unvaccinated students in that school — but with an expanded testing pool that included vaccinated and unvaccinated children.

That means that schools with high vaccination rates are not seeing the significant increases in surveillance testing that parents and educators expected.

Emily, a teacher in Manhattan who asked that her last name not be used since she was not authorized to speak publicly, said only eight students in her school of more than 300 mostly vaccinated students were tested this week — the same number as the week before break. Her experience was echoed in interviews with parents and teachers across the city.

About two-thirds of families have not opted to include their children in the testing pool, prompting calls for Mr. Adams to automatically enroll all families in the program and give them the choice to opt out. Children in the city’s prekindergarten and early childhood classrooms are not eligible for vaccines or testing, which has frustrated many parents of young children.

Despite changing policies, some teachers said they were grateful to be back in classrooms.

Nathalie Diaz, a third-grade teacher in the South Bronx, said only one student, who had tested positive for the virus, was missing from her class this week. Her school had been closed for a few days before the break because of a spike in cases. She said parents and children seemed relieved to be back in classrooms.

On Wednesday, Ms. Diaz’s class worked on a group project about the Constitution. Watching the students reading off each other’s pages, she thought about how much more challenging the exercise would be if done remotely.

“It is wonderful to be back,” Ms. Diaz said. “I love that now we can kind of get back to some sort of normalcy, considering everything still going on.”