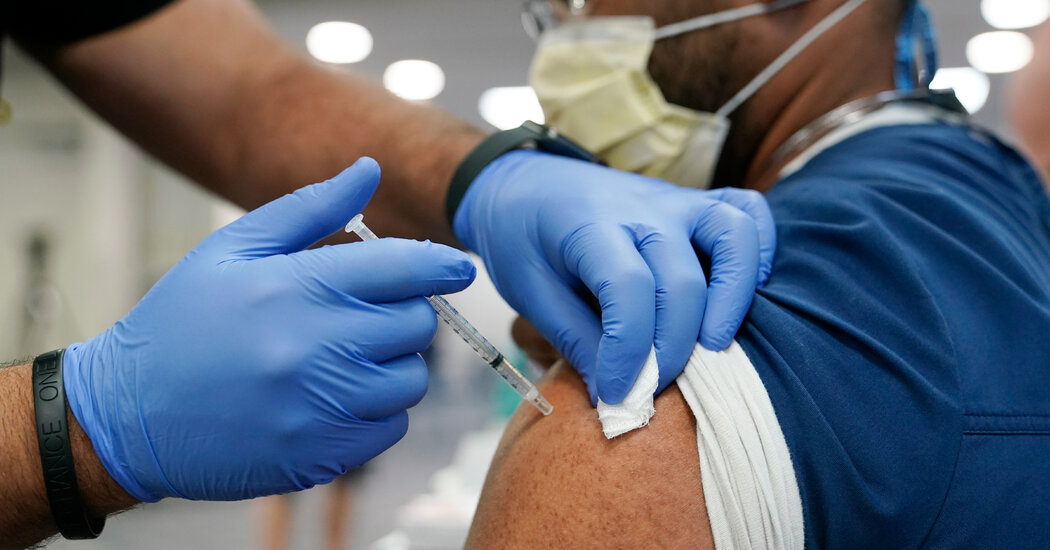 New York will require health care workers to get a booster within two weeks of becoming eligible for one, Gov. Kathy Hochul said on Friday, as hospitals contend with crippling staff shortages amid the Omicron wave.

The state is averaging about 70,000 new cases daily and is experiencing an alarming rise in hospitalizations, particularly of unvaccinated children.

“We’ve already seen what’s been happening in our health care environments,” Ms. Hochul said. “Staff is getting sick, they’re leaving. We need them to get well, we need them to have the best fortification they possibly can, and that means getting a booster shot.”

The governor said that the state health commissioner, Mary Bassett, would recommend the change to a state advisory council on Tuesday, and that they anticipated “swift approval.”

Ms. Hochul also indicated that she would require visitors to nursing homes to wear “surgical-type” masks and show proof of a negative test.

The State Health Department released a report on Friday showing that pediatric hospital admissions had shot up from 70 per week at the beginning of December to 571 per week by the end of the month. In New York City, they went from 22 per week to 385, and the number increased nearly tenfold in the Mid-Hudson area and on Long Island.

The report found that hospitalizations were increasing faster for children than for adults, Dr. Eli Rosenberg, deputy director for science in the Health Department’s Office of Public Health, noted in an interview.

Seventy percent of newly admitted children who tested positive for the virus were experiencing symptoms, and half had no comorbidities.

“We’re very concerned about this alarming increase,” Dr. Rosenberg said, adding that there had been a dangerous tendency throughout the pandemic to brush off the risks for younger patients. “What we’re trying to show is there are serious consequences for some children.”

Even for children who are not hospitalized primarily because of Covid, but are found to have it after being admitted, the virus could well be an aggravating factor in their medical treatment, he said.

The report underscored the importance of vaccination for eligible children and anyone around them. More than 90 percent of hospitalized children ages 5 to 11, and 65 percent of those ages 12 to 17, were unvaccinated.

Statewide, 31 percent of children ages 5 to 11 have received at least one vaccine dose, and 73 percent of those ages 12 to 17 have. People under 5 are not yet eligible for vaccinations, and that is the group of children who have seen the fastest increase in hospitalizations overall.

Data released by the Centers for Disease Control and Prevention on Friday also showed a nationwide increase in the number of children 4 and younger admitted to hospitals with the virus.

The longstanding advice on masks and social distancing remains as important as ever, particularly for vulnerable children, Dr. Rosenberg said.

“We want everyone to double down on what we’ve been saying and take it seriously,” he said.