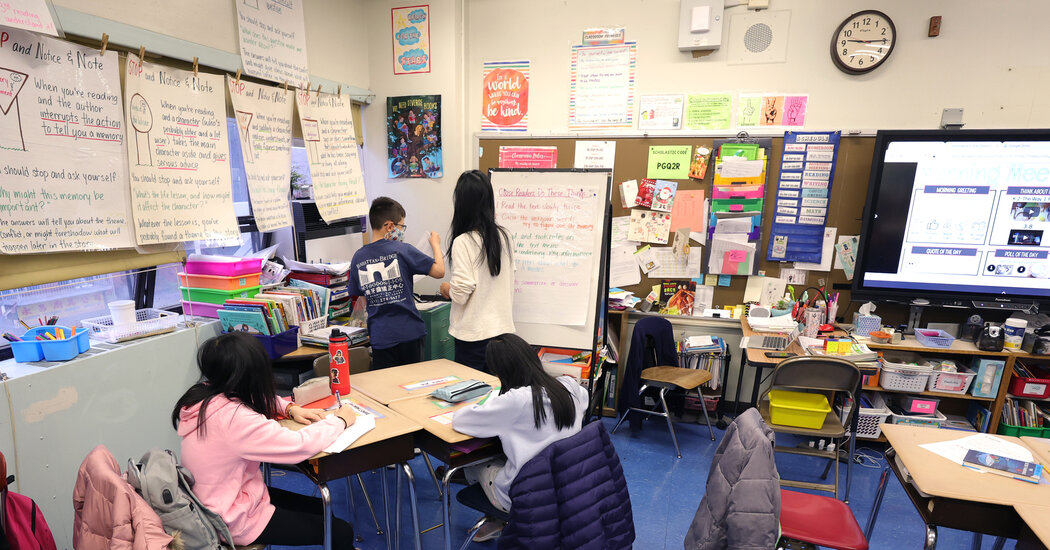 Mayor Eric Adams said on Thursday his administration is considering a “temporary” remote learning option for the significant number of students who are already staying home during the pandemic.

There appeared to be no actual policy shift on Thursday, and no active planning for a remote option that would coincide with the current Omicron surge, which already appears to be plateauing across the city. Instead, the city and the teachers’ union appeared to be negotiating in public about whether and how to implement a remote learning option.

The two sides have — for nearly two years — been unable to agree on whether teachers should be allowed to livestream their in-classroom lessons to students learning at home. Without such an agreement, it’s unlikely that a remote option will materialize.

Speaking at a news conference, Mr. Adams said that, even though public health experts believe school is the “safest” place for children, “we do have to be honest that there is a substantial number of children, for whatever reason, parents are not bringing them to school.”

“I have to make sure children are educated,” he said. “We’ve lost two years of education, two years. The fallout is unbelievable.”

Around 75 percent of students were in school on Wednesday, Nathaniel Styer, a spokesman for the city Education Department said Thursday. The United Federation of Teachers wants a remote learning option but has consistently opposed livestreaming, a practice embraced in other school districts. The union and many of its members say the practice would place an undue burden on teachers, who would have to teach two groups of students simultaneously.

The city has argued that it is all but impossible to create a parallel at-home school district without the option of livestreaming. When the city first created a remote learning option in the fall of 2020, it experienced major staffing issues presented by having to essentially run two systems at the same time: one in person, one at home.

Omicron cases are already flattening in New York City. Still, union leaders were adamant about offering some sort of remote learning option, and not necessarily because of the current variant.

“We need to set something up, because we hope this is the last wave, but we do not know if it is,” Michael Mulgrew, the president of the New York City teachers’ union, said on Wednesday during a call-in town hall for union members. “So, I think it’s time for the city really to think about it and contemplate it.”

Mr. Mulgrew added that his members didn’t want to go back to a scenario where 65 percent of children were home, so he asked that if remote learning becomes an option, parents “use it judiciously.”

Meantime, Mr. Mulgrew asked that parents give schools consent to test their children regularly and to consider getting them vaccinated too. “Because these are two of the things the school system needs right now for keeping your child and all of the children safe,” Mr. Mulgrew said Wednesday.