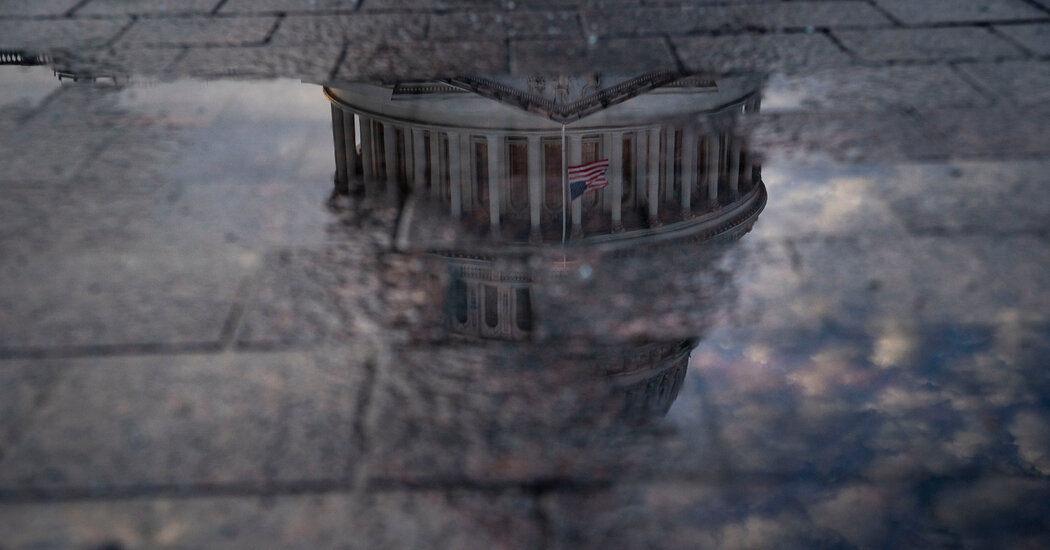 WASHINGTON — President Biden plans to call on the nation on Thursday to recommit itself to a peaceful democracy, warning that it remains at risk a year after a mob of President Donald J. Trump’s supporters stormed the Capitol to stop Congress from ratifying his election defeat.

In a speech to be delivered at the Capitol marking the anniversary of the attack, Mr. Biden will offer a striking portrait of the fragility of the two-century-old American system, according to advance excerpts released by the White House. Rather than reaffirm the durability of the union, as presidents typically do, he will emphasize the dangers of its collapse.

The speech will kick off a day of commemorations that, instead of showcasing American unity, will underscore just how fractured the nation remains a year after Mr. Trump’s refusal to accept defeat at the ballot box stirred backers to invade the Capitol, disrupt the counting of the Electoral College votes and send lawmakers scurrying for safety.

Mr. Biden and Democratic leaders plan addresses, discussions and a candlelight vigil while Republican leaders largely intend to stay away. Mr. Trump originally planned a news conference at his Mar-a-Lago estate in Florida to rail against the investigation into the attack but canceled to the relief of Republicans who considered it counterproductive.

The disparate approaches to the day reflect how much Jan. 6 has become interpreted through a political lens. Democrats view the storming of the Capitol as an existential threat to constitutional democracy unlike any in modern times. Most Republicans would rather focus on anything else, with some convinced that it is being used as a partisan weapon against them and others fearful of crossing Mr. Trump, who continues to wield outsize power within the party.

Feelings remain raw on Capitol Hill, a place of post-traumatic stress that has yet to fully recover from the psychological and political scars of an assault that led to at least seven deaths and hundreds of injuries. More than the usual acrimony over legislative differences, the legacy of Jan. 6 has exacerbated the toxic rift between members and staff aides on opposite sides of the aisle.

While Mr. Biden has hesitated to engage in a back-and-forth with his predecessor, aides said he would use his 20-minute speech to more directly blame Mr. Trump for encouraging the violence a year ago.

“I would expect that President Biden will lay out the significance of what happened to the Capitol and the singular responsibility President Trump has for the chaos and carnage that we saw,” said Jen Psaki, the White House press secretary. “And he will forcibly push back on the lies spread by the former president and attempt to mislead the American people and his own supporters.”

Still, Ms. Psaki did not say whether Mr. Biden would specifically acknowledge him by name. “People will know who he’s referring to,” she said.

Mr. Biden is also expected to touch on voting rights, although he has a separate speech on the subject scheduled for next week and Ms. Psaki said the Jan. 6 address is “more focused on the day, what it means in our history and the role that some have played in continuing to perpetuate the big lie.”

Senator Chuck Schumer of New York, the Democratic majority leader, has signaled in recent days that he would make a renewed effort to pass stalemated voting rights legislation, and liberal activists have called on Mr. Biden to use the anniversary to throw his weight behind the effort.

But Republicans have accused the White House and Democrats of politicizing the attack to promote legislation meant to benefit their own party. “It is beyond distasteful for some of our colleagues to ham-fistedly invoke the Jan. 6 anniversary to advance these aims,” said Senator Mitch McConnell of Kentucky, the Republican minority leader.

Many if not most Republicans plan to absent themselves from Thursday’s events, with most of the party’s senators heading to Georgia for the funeral of their former colleague Johnny Isakson.

While Mr. Trump scrapped his news conference, he continued to issue written salvos against the House committee investigating the attack as he seeks to reframe the riot as the understandable result of anger at the 2020 election, which he falsely claims was stolen.

Undaunted by the violence a year ago, Mr. Trump still uses the sort of inflammatory rhetoric that prompted House Democrats and a handful of Republicans to impeach him for inciting an insurrection. In a statement Wednesday assailing coronavirus vaccine mandates, he said that “MAGA nation should rise up” against such policies. He also again teased that he would run in 2024 by releasing poll numbers showing him leading other Republican candidates.

Although Republican leaders will remain officially silent, Mr. Trump’s camp will be represented by Stephen K. Bannon, his onetime chief strategist, who will host a podcast featuring two other Trump allies, Representatives Matt Gaetz of Florida and Marjorie Taylor Greene of Georgia.

Security forces in Washington were on alert. The Department of Homeland Security issued an intelligence assessment to state and local law enforcement on Dec. 30 saying that although some radicals could exploit the anniversary “to promote or possibly commit violence,” the Biden administration lacked evidence of “a specific or credible threat.”

Domestic extremists, however, continued to amplify false statements about the 2020 election, according to the assessment, which concluded that “the most likely threat of violence” on Thursday “stems from lone offenders seeking to target perceived ideological opponents, political symbols or law enforcement.”

Zolan Kanno-Youngs contributed to this report.