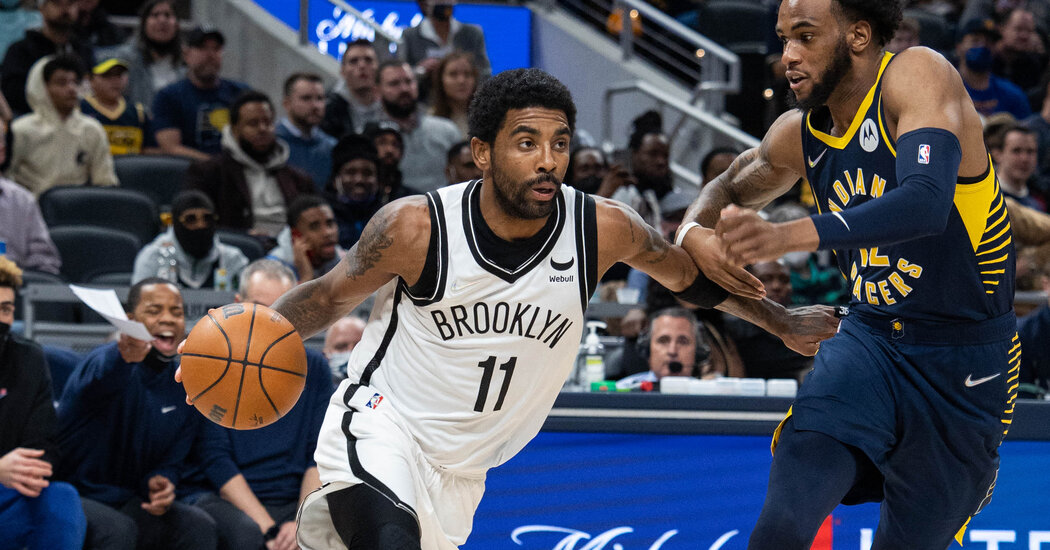 The Nets find themselves in a basketball paradox: The team has championship aspirations, yet it might be in their interests to lose a few more games on the way to the playoffs — and play their way into a lower seed once they arrive.

What good is hosting a Game 7, after all, if one of your biggest stars can only play in road games?

That was one of the questions swirling on Thursday night when the Nets entered a new phase of their bizarre season by welcoming back Kyrie Irving — part time — after having exiled him for the first 35 games of the season because of his choice to remain unvaccinated against the coronavirus.

That decision had ruled Irving out of games in Brooklyn’s home arena, in a city where players must be vaccinated, and for months the Nets had insisted they would not accept even a player of Irving’s talents in a part-time role. But last month, amid a coronavirus outbreak that had depleted the roster, the team relented. And in only four quarters on Wednesday in Indiana, Irving, a seven-time All-Star, made it easy to see why the Nets had made that call.

After a somewhat rusty start, Irving found his groove and began to look like the star the Nets had signed in free agency in 2019. He helped lead the Nets out of a 19-point deficit against the Indiana Pacers, en route to a 129-121 victory, finishing with 22 points, 3 rebounds and 4 assists. Ten of those points came in the fourth quarter, when the Nets overtook the Pacers.

“I’ve had a lot of debuts, but nothing comes close to this one,” Irving said. “It meant a little bit more. Just because at this stage, taking off eight months or being out of the game for eight months and coming back in, there’s so much uncertainty.”

It was certainly unusual. And to highlight its awkwardness, Irving will immediately head back to banishment: The Nets’ next two games are at home in New York City, where Irving’s vaccination status prevents him from playing as a result of a policy put in place by the city’s former mayor, Bill de Blasio, and that applies to public-facing places like gyms and restaurants.

If Irving remains unvaccinated, he will be available — barring other injuries or absences — for 21 of the team’s 46 remaining regular-season games. (Local health restrictions mean that, in addition to the games in Brooklyn, Irving also cannot play games against the Raptors in Toronto or in Manhattan against the Knicks.)

With rosters having become difficult to fill with wave after wave of players being ruled out because of coronavirus protocols, the Nets have chosen to treat Irving as a recurring guest star — someone they hope can make high-impact cameos on their quest to win a championship. Wednesday offered a glimpse of the obvious benefits of the on-again, off-again solution the Nets have chosen.

“His game is just so beautiful,” the star forward Kevin Durant said of Irving. “Makes the game so much easier for everybody out there.”

It only took one half for the rust to be shaken free. Irving showed off his court vision with a slick lookaway pass to Nicolas Claxton in the second quarter. He displayed his ability to create space for himself off the dribble, and provided an extra shooter on the floor. When the game was tight, Irving provided the final push for the Nets.

Most important — at least in the games he plays — Irving offers the Nets a reliable option to take the load off Harden and Durant, who have frequently had to put the Nets’ offense on their shoulders. On the nights when Irving is available, Nets Coach Steve Nash will have the ability to sit Harden and Durant at the same time, and allow Irving to run the offense with bench units. Irving’s presence alone also draws defenders, which creates room for players like LaMarcus Aldridge and Patty Mills to get open jumpers. He also can give Durant and Harden more freedom to move without the ball.

In simple terms, the Nets have been a barely above average team offensively this year, with an offensive rating that ranks 12th among the N.B.A.’s 30 teams despite the presence of Durant and Harden. They will now have the ability to inject of the best offensive players in the league into their team — sometimes.

Asked about Irving’s performance in his return, Nash paused slightly.

“Looks like himself,” Nash said with a laugh, adding, “You can see the rhythm was there but it’s still an adaptation. We’ve got to give him some space.”

With that space, the team is gambling that having a star part-timer matters more than building continuity. It’s a grand experiment to shuffle a star in and out of a starting lineup. And this group of stars — Irving, Harden and Durant — has had minimal time to play together. Last season, when Durant returned from injury and Harden was added in a trade, they rarely took the floor together.

“It’s going to take time just because we have to get used him being on the road and not at home, things like that,” Harden said. “But this has been a resilient group all year.”

The global surge. The virus is spreading faster than ever at the start of 2022, but the last days of 2021 brought the encouraging news that the Omicron variant produces less severe illness than earlier waves. As such, governments are focusing more on expanding vaccination than limiting the spread.

After the game, Harden tweeted a picture of Irving with the caption, “good having you back king.”

Because of Irving’s availability, though, it is not clear that the Nets should work terribly hard to win as many regular-season games as possible. The more wins, the higher the playoff seed. The higher playoff seed, the more home games in the playoffs — which means less Irving.

The Nets are currently 24-12, placing them second in the Eastern Conference. But if the prospect of winning by losing more sounds absurd, it also raises questions about the Nets’ credibility.

Before the recent surge of players entering the league’s health and safety protocols, the Nets had argued that having Irving as a part-time player would be an impediment to fostering a healthy culture. In October, after the team had definitively said that Irving would not be permitted to be a part-time player, General Manager Sean Marks said in a statement that to achieve a championship, “Each member of our organization must pull in the same direction.”

Somewhere along the course of the season, as the Nets found themselves in search of healthy bodies to fill out their roster, Marks and the rest of the Nets’ leadership pivoted. All that stuff about pulling in the same direction? Never mind.

But this wasn’t about the Nets needing players. Not really. When Irving took the floor Wednesday, the Nets’ entire roster was available except for Joe Harris, who is injured. Irving’s return was about the Nets wanting Irving in the team. Nothing else, after all, had changed. Asked after the game if his stance about being vaccinated had changed, Irving demurred, saying, “It’s not an ideal situation.”

But what’s to stop the next star player from trying to take half the season off? Or make other unusual requests? And how would the Nets be taken seriously if they said no?

None of those questions, of course, or any others about Irving’s situation, will matter if the Nets win a championship.

As for his vaccination status, Irving said he was “praying that things get figured out and we’re able to come to come to some collective agreement, whether it be with the league or just things that’s going on.”

He added, “However it looks later in the season, then we’ll address it then.”