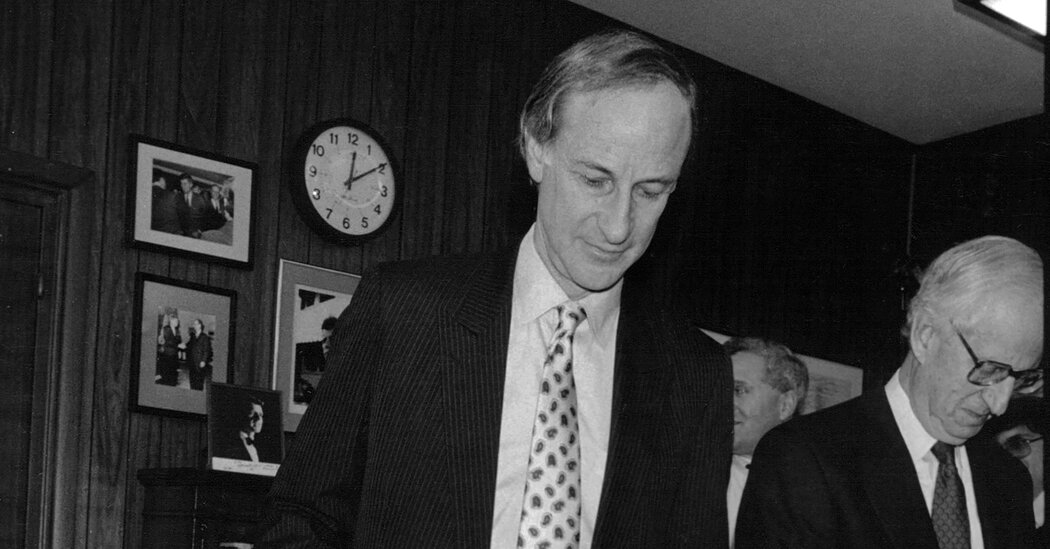 Gerald Stern, who for three decades set the bar for courtroom ethical standards in New York State as the first administrator of its Commission on Judicial Conduct, died on Jan. 6 in the Bronx. He was 86.

His death, in a hospital, resulted from complications of cancer, for which he had been treated for 19 years, his son, Marc, said.

Mr. Stern led the commission from its inception in 1974 through 2003, a period in which it sacked, censured or admonished some 600 judges for offenses including corruption, conflicts of interest, favoritism (like nepotism or ticket-fixing), improper demeanor (including sexual misconduct) and proscribed political activity.

As the administrator, or chief prosecutor, he gained the respect of jurists who originally bristled at any outside oversight, much less discipline, and of disgruntled litigants who were disappointed that the commission’s jurisdiction did not extend to the legal merits of an individual judge’s decision.

“Jerry was fearless, standing up in those early days to an often hostile judicial establishment unused to oversight and slow to appreciate the ways he protected their independence,” said Robert H. Tembeckjian, who succeeded Mr. Stern as the commission’s administrator and counsel.

In creating the commission, the New York State Legislature raised a fundamental question: Who decides when a judge is out of order — the public or judicial peers?

The commission, comprising judges, lawyers and private citizens, confronted that question repeatedly, most notably in 1983, when considering misconduct charges against Alan I. Friess, a New York City Criminal Court judge. Judge Friess once asked spectators and litigants to vote on which of two men in a harassment case he should believe. On another occasion he tossed a coin to determine how long a pickpocket should spend in jail.

The challenge facing the commission was whether these actions gave the appearance of impropriety, failed to promote public confidence in the integrity and impartiality of the courts, and placed the judiciary in disrepute. (As stipulated by the Legislature, initial disciplinary proceedings against judges were not conducted publicly.)

Judge Friess resigned during the proceedings, but the commission ordered him removed, in effect barring him from holding judicial office again. The ruling cited the judge’s “continued and unyielding insistence not only that his conduct was appropriate but that it was an act of genius.”

Mr. Stern “understood that confidence in the fairness of the courts was in large measure based on upholding the strictest ethical standards for judges,” said Jonathan Lippman, a former chief judge of the New York State Court of Appeals, the state’s highest court.

He added, “He wrote the script and set the example for the professionalism of judicial conduct regulators across the nation.”

Gerald Stern was born in the Bronx on April 15, 1935, to Morris and Jean (Finkelberg) Stern. His father was a coffee distributor who died when Jerry was 7; his mother was a homemaker.

Raised in Seagate, at the western end of Coney Island, Mr. Stern graduated from Abraham Lincoln High School in Brooklyn, served in the Army and earned a bachelor’s degree from Brooklyn College in 1958. (The commission’s office was furnished sentimentally, if spartanly, with stadium seats from Brooklyn’s Ebbets Field.)

Mr. Stern was working as a salesman for Broyhill Furniture in Rochester, N.Y., when, on a blind date, he met Ruth Gurowski, a Holocaust survivor who had arrived in the United States when she was 16. They married in 1960, and she persuaded him to enroll in the Syracuse University College of Law, from which he graduated. He earned a master’s degree in criminal justice from New York University.

In addition to his son, he is survived by his wife; a daughter, Andrea Stern; and two grandchildren.

Mr. Stern had a long career in public service after being admitted to the bar in 1963. He served as an assistant district attorney in Manhattan; the legal director of an anti-poverty program; a staff lawyer for President Lyndon B. Johnson’s Commission on Law Enforcement and Administration of Justice; an assistant New York City corporation counsel; and the director of administration of the state courts in the first judicial department, which covers Manhattan and the Bronx.

He won 39 disciplinary cases in the courts from 1974, when the Judicial Conduct Commission began as a temporary body, to 1978, when it was established permanently by a state constitutional amendment. From 1987 until he retired in 2003, he oversaw 559 other disciplinary cases, including a ticket-fixing scandal involving more than 200 town and village court justices. The commission has offices in Manhattan, Albany and Rochester.

After retiring, Mr. Stern helped his wife with her memoirs of life as a Holocaust survivor.

A founder of the national Association of Judicial Disciplinary Counsel, he was a prolific letter writer and author of opinion essays for The New York Times and other publications.

He argued that “codes of judicial conduct, approved by the judiciary, place limitations on conduct, not on judicial independence.”

“Indeed,” he added, “when unfounded or invalid complaints are dismissed, judicial independence is protected.”

He also criticized prosecutors for equating indictments with convictions, in particular singling out Rudolph W. Giuliani when he was the United States Attorney for the Southern District of New York in the 1980s. And he railed against a patronage system that gave employment to unqualified political appointees in the court system.

Mr. Stern wrote on a yellow legal pad with a No. 2 pencil, consuming as much rubber in the eraser as graphite in the point. “I write quickly and in volume,” his son, Marc, recalled him saying, “and then make many changes in drafts 2, 3, 4, 5, 6 and 7.”