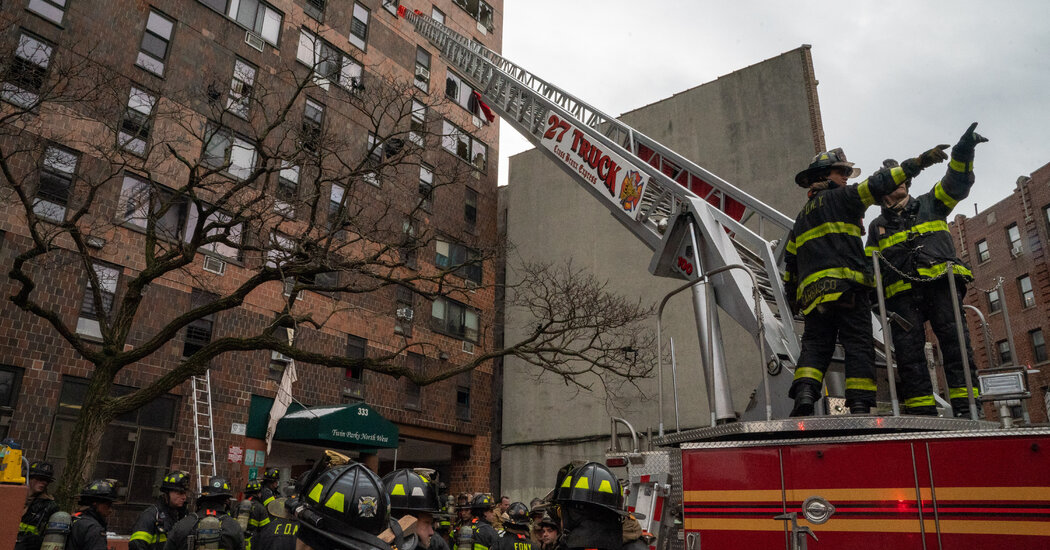 Good morning. It’s Wednesday. We’ll look at what fire officials and experts say is the best strategy if there is a fire in a high-rise building. We’ll also take a last ride on a subway stalwart.

It sounds counterintuitive, but in most cases when you hear “fire!” in a high-rise building, stay put.

The natural instinct, hammered home by countless elementary-school fire drills, is to do the opposite and get out — to leave your apartment, run through the hallway and down the stairs. But experts say that remaining in your apartment with the door closed is the safe decision — unless that is where the fire is.

Officials are focusing on similarly simple safety measures in the aftermath of the deadly fire in a Bronx high-rise on Sunday.

None of the 17 victims was burned, officials said — all died after inhaling smoke. Officials said two doors that had been left open contributed to the smoke that filled the corridors — the door to the duplex apartment where the fire started, which did not close as the occupants fled, and the door to a stairwell, which turned the stairwell into a chimney and let lethal smoke spread rapidly.

After the flames were out and the smoke dissipated, families and friends began the desperate search for loved ones. The uncertainty about who had survived and who had not spread to the West African nation of Gambia, because the building was a stronghold for Gambians who had relocated to New York. Some families called every hospital in the area, desperate for information about people who had not been seen since the fire broke out and who had not answered their cellphones. Others went from hospital to hospital.

Most of the dead were not publicly identified until Tuesday night. Musa Kabba, the imam of a mosque that is a short walk from the building, said earlier that as many as 12 members of the mosque were believed to have died in the fire. But he was frustrated that official word had not come.

The door to the apartment where the fire started had a self-closing mechanism that officials said failed to engage. That fed the fire, which had started when an electrical space heater burst into flames. Shutting the door on the way out makes a difference because doing so cuts off the air supply, limiting the oxygen available for combustion, said Daniel Madrzykowski, a director of research for the Underwriters Laboratories’ Fire Safety Research Institute.

That is not new advice. A public service announcement produced by the Fire Department and New York 1, urging apartment-building residents to close their doors in case of fire, won an Emmy in 2000, the year after two deadly fires in two New York high-rises.

But problems with open doors have persisted. The city passed legislation increasing oversight over apartment doors in 2018, a year after 13 people died in a fire in the Bronx. More recently, the Department of Housing Preservation and Development issued 22,000 violations for self-closing doors during the 2021 fiscal year, 18,000 of which have since been corrected.

It is not clear why the door failed in the apartment with the burning space heater. Kelly Magee, a spokeswoman for the property owners, said the door had worked properly last July, when maintenance workers inspected it while repairing a lock.

The Fire Department’s investigation into the fire is continuing. The New York State Department of Housing and Community Renewal, an oversight agency, is also reviewing records related to the building.

Temps are in the high 30s on this mostly sunny day with wind gusts. The evening is mostly cloudy with temps in the low 30s.

A subway stalwart rides into retirement

They were born with the can-do optimism of the early 1960s: Their gleaming, corrugated bodies were made of stainless steel, a material never before used in subway cars. They would be easier to maintain because they would never rust or have to be painted. They came with a peppy nickname: “Brightliner.”

They lasted longer than expected — 57 years, more than a third longer than the operating life anticipated on Day 1, when a 20-piece band in green-and-gold uniforms was waiting when the first Brightliners rumbled onto Track 37 at Grand Central Terminal. (Yes, Track 37, normally a berth for a different kind of train. The chairman of the New York City Transit Authority “wanted to emphasize that subways are railroads, too, although he admitted that most railroaders think otherwise,” The New York Times explained the next morning.)

And now they have been retired. They carried their last passengers on Sunday, although some will haul garbage. Others may join previously retired subway trains in artificial reefs in the Atlantic Ocean.

My colleague James Thomas rode along on the last day for the last of the R-32s. As recently as 2020, Brightliners carried passengers on the A, C, J and Z lines. I knew them from the A and the C — Brightliners took me to and from The New York Times countless times.

The last-day train ran along the Q line. James said that 200 people were waiting when the train pulled into the Brighton Beach station at 9:30 a.m., among them subway aficionados like Zorick Johnson, who had brought along a model of the R-32.

James said the ride was “way fun,” even though he considers himself “the polar opposite of a subway aficionado” — a car guy from Detroit whose father was a project manager for General Motors.

Still, he told me, “When I saw Zorick with his O-scale model of the Brightliner, I totally got it.”

“He told me his dad was a retired M.T.A. train operator and that he grew up with the subway train woven into the fabric of his daily life. When we rely on our machines in such fundamental ways, it’s easy to fall in love with them.”

He said he went into the assignment expecting to capture the Brightliners’ beauty. But looking through the video he shot, “I’d also recorded how this very specialized machine had brought all these New Yorkers together,” he said. “It felt important to present that with at least as much gusto as the train itself.”

I woke up late on a Saturday morning after an 18-hour workday on Friday. I was sore and groggy. My two cats usually wake me up at exactly 6 a.m. for breakfast, but on this morning they had mercifully let me sleep in.

As I was making coffee in the kitchen, I looked down and noticed red paw prints all across the white tile floor.

Alarmed, I ran back to the bedroom to inspect the cats’ feet and bodies for wounds. They yawned and seemed annoyed by my investigation.

Back in the kitchen, I pressed my nose to the ground to see whether I could detect a smell of blood, but I could not. I thought maybe the cats had raided the pantries, but a quick examination of all the cabinets turned up no clues.

I cleaned up the mess and returned to preparing my coffee. When it was ready, I poured a cup and let my brain emerge from its fog.