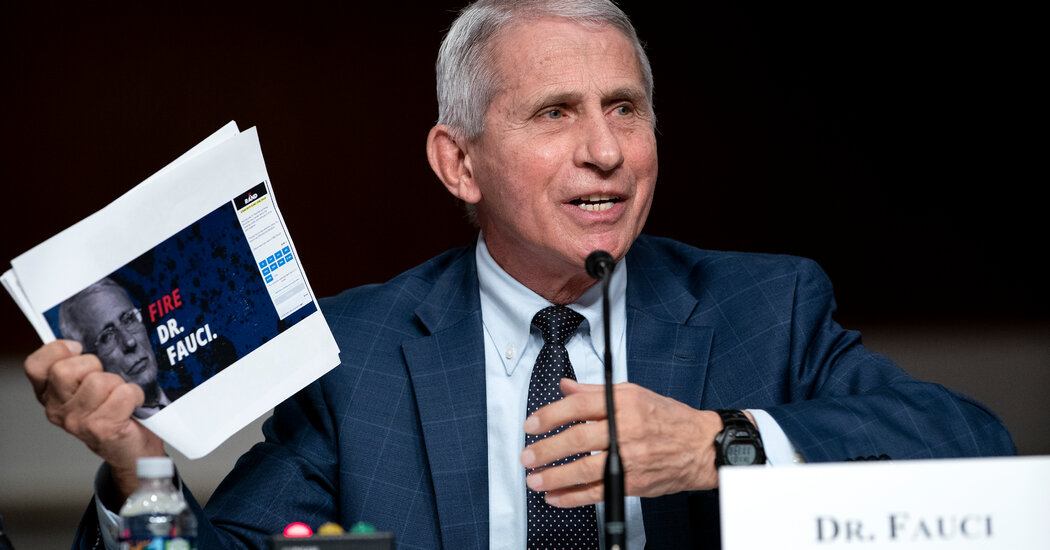 A Senate hearing on the federal government’s Covid response briefly turned into a fierce back-and-forth between Senator Rand Paul of Kentucky and Dr. Anthony Fauci on Tuesday, the latest in a series of heated exchanges between the two men stretching back to the early days of the pandemic.

Mr. Paul accused Dr. Fauci of plotting with colleagues to undermine scientists with opposing views on the virus, something Dr. Fauci denied doing.

The senator cited an email exchange between Dr. Fauci and Francis Collins, a former director of the National Institutes of Health.

“In usual fashion, you are distorting everything about me,’’ Dr. Fauci responded. The two then spoke over each other, disputing the contents of the email chain.

Later in the hearing, Dr. Fauci said Mr. Paul was partly responsible for a surge in threats against Dr. Fauci and his family.

He said personal attacks from Republicans had put his safety and that of his family at risk. He cited reports that an armed man in Iowa had been arrested in connection with plans to kill him and other officials in Washington. Dr. Fauci also displayed a fund-raising webpage for Mr. Paul that included a “Fire Dr. Fauci” graphic.

“You are making a catastrophic epidemic for your political gain,” Dr. Fauci said to Mr. Paul.

Since the early days of the pandemic in 2020, Dr. Fauci has often clashed with Mr. Paul, an ophthalmologist who is not currently practicing. Their exchanges have become a common scene at Senate testimony. Mr. Paul has accused Dr. Fauci of manipulating research and of lying to the public about the origins of the virus to protect China. Dr. Fauci has denied these claims, dismissed many of Mr. Paul’s assertions as falsehoods, and has stated in a hearing that Mr. Paul did not know what he was talking about.

Mr. Paul was one of the first senators to be infected with the coronavirus in 2020, and has often criticized pandemic precautions like wearing masks. YouTube has twice suspended him from posting on their service for spreading misinformation.