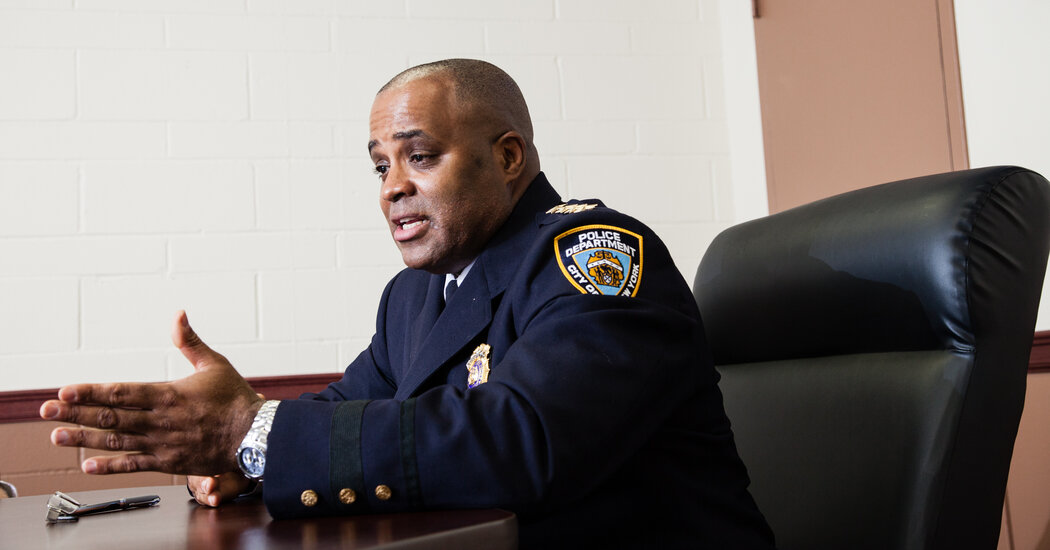 In the last few weeks, as Mayor Eric Adams unveiled top members of his new administration in one splashy news conference after another, one expected move had not come: the naming of a controversial former top police chief as the deputy mayor for public safety.

On Friday morning, the former chief, Philip Banks III, announced his own appointment as deputy mayor in an opinion piece in The Daily News.

Mr. Banks’s appointment had been delayed amid concerns about whether his 2014 resignation from the New York Police Department while the subject of a federal corruption investigation would hamper his credibility and ability to perform the job. Mr. Banks was named as an unindicted co-conspirator in a wide-ranging corruption investigation that resulted in several convictions.

When he left the force, Mr. Banks had been chief of department, the highest-ranking uniformed position, and was about to become first deputy to William J. Bratton, then the incoming police commissioner.

The method of the announcement was a sharp departure from protocol; when Mr. Adams announced the selection of his five other deputy mayors, all women, on Dec. 20, he held a news conference in Brooklyn Borough Hall where the new appointees were present.

In the opinion piece, Mr. Banks dismissed concerns about the corruption investigation; he denied any wrongdoing and said that the inquiry — which centered on whether Mr. Banks and other high-ranking police officials had abused their positions in exchange for personal benefits — was not the cause of his resignation.

“The central theme of the reports about my involvement in the corruption scheme was that I was party to it; that I traded favors as a senior N.Y.P.D. official for some form of compensation,” Mr. Banks wrote in the piece. “That is 100 percent false.”

Without mentioning Mr. Bratton by name, Mr. Banks said that he retired because he and the new commissioner did not agree on the parameters of his role.

Stefan Ringel, a spokesman for Mayor Adams, confirmed the appointment on Friday morning. He said a news release about Mr. Banks’s appointment was forthcoming.

Asked why Mr. Banks had been allowed to announce his own appointment, Mr. Ringel said: “We do things in a different way.” The Adams administration did not immediately make Mr. Banks available in response to a request for an interview.

Mr. Adams, a retired police captain, had made public safety the linchpin of his successful campaign for mayor.

In recent days, Mr. Banks, 59, has been overseeing the mayoral transition and changes at the Police Department from an office in 1 Police Plaza. He has been a regular presence of the 14th Floor, which houses the offices of Mr. Adams’s newly appointed police commissioner, Keechant Sewell, and the new first deputy commissioner, according to several people with knowledge of the matter. On Thursday, Mr. Banks personally notified several senior department officials that they would be replaced, the people said. Those officials included the deputy commissioner of the Internal Affairs Bureau, Joseph Reznick, who had a role in the corruption investigation of Mr. Banks in 2014, which was conducted by a specialized squad of Federal Bureau of Investigation agents and police investigators that handles cases involving public and police officials.

Mr. Banks’s involvement in the removal of Deputy Commissioner Reznick was first reported by The Daily News.

Mr. Adams did not address Mr. Banks’s appointment during a morning news conference about the weather on Staten Island or in a subsequent radio interview. The mayor has previously offered high praise of Mr. Banks, saying in an interview on NY1 earlier this month that he was “a strong believer that Phil Banks has been an amazing law enforcement officer.”

“He was an unindicted co-conspirator in one of the biggest New York City corruption scandals in the last 20 years, one that directly implemented his role as chief of department,” Mr. Kaehny said. “It’s laudable that Eric Adams wants to support his friends and loyalty is a great virtue, but Eric Adams’s duty is to the public, not to Phil Banks.”

According to evidence gathered by the F.B.I., Mr. Banks accepted high-priced meals, tickets to sports events and foreign and domestic travel from two businessmen, Jona Rechnitz and Jeremy Reichberg, who were trying to corrupt police officials in order to obtain favors for their associates, such as police escorts, special parking privileges and the like.

Mr. Rechnitz cooperated with authorities, pleaded guilty to criminal fraud charges and testified about his role in court. Mr. Reichberg was convicted at a 2019 trial on bribery and conspiracy charges.

In his Daily News column, Mr. Banks said it was “a mistake” to have associated with the two men.

“I realize now that even the appearance of our friendship was damaging to my profession,” he wrote. Mr. Banks declined to comment on his relationship with the men when reached by phone last month.