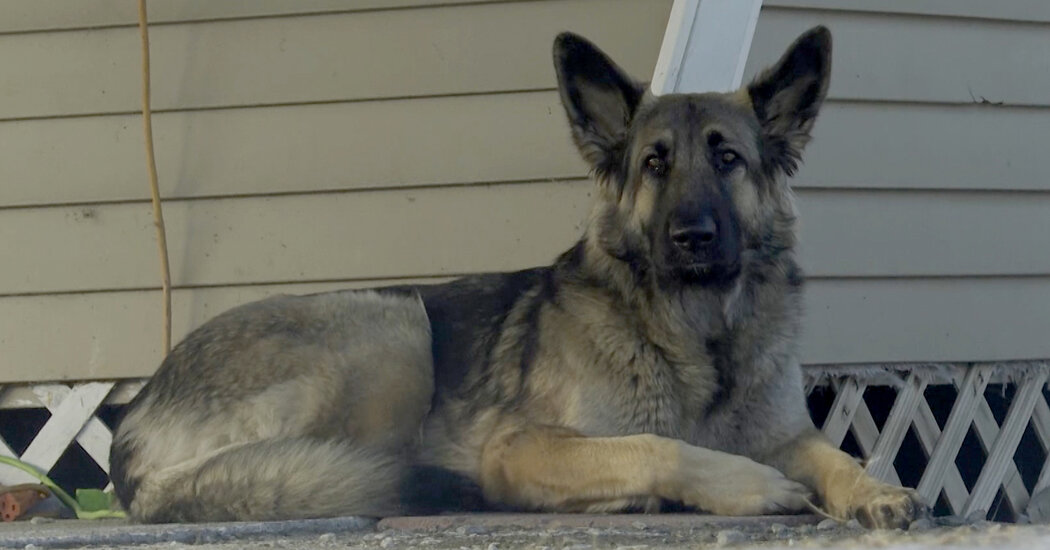 As Cam Laundry lay unconscious in the snowy woods near his battered pickup after a rollover crash, his dog Tinsley ran off into the icy Vermont night and returned with help.

The authorities and local media are now hailing the 1-year-old Shiloh Shepherd as a “real-life Lassie” for her actions on Monday night.

Rescuers said they would not have spotted Mr. Laundry and his seriously injured passenger if not for Tinsley.

They credited her with preventing a terrible night from becoming a lot worse for Mr. Laundry and his passenger. The Vermont State Police said Mr. Laundry, 31, was intoxicated and cited him with driving under the influence. He says he is cooperating with the investigation.

He spoke with gratitude about Tinsley in a phone interview on Wednesday. “She’s my guardian,” Mr. Laundry said as she played with her squeaky squirrel toy. “The night was very cold. We were in hypothermic conditions when they reached us.”

After the crash around 10 p.m. Monday night, Tinsley crossed into New Hampshire, a mile or so away, and led the authorities back into Vermont to the wreck, which officials said they would not have noticed unless someone had seen the damaged guardrail that the truck had tumbled over.

At first the officers were simply trying to catch Tinsley to get her out of traffic on Interstate 89 after a driver reported a dog running loose. But she kept running north, slowing occasionally to keep the officers close behind, Lt. Dan Baldassarre of the New Hampshire State Police said in a statement. She eventually led them to a bridge over the wreck.

“It’s a real-life Lassie story,” he said, referring to the fictional collie from long-running TV and radio programs who had a penchant for saving humans who got themselves in trouble. “She’s the hero,” Lieutenant Baldassarre said.

Mr. Laundry had minor injuries, including a concussion, bruises and a cut on his hand that required stitches. His passenger in the Ford F-350 truck, Justin Connors, 40, sustained a serious neck injury and a broken leg but was in stable condition, Mr. Laundry said.

An American bulldog belonging to Mr. Connors survived the wreck but was killed by oncoming traffic after the crash, Mr. Laundry said. The bulldog’s name was Grizz, Mr. Laundry said, though he was not entirely sure of the spelling.

Tinsley’s actions were hailed by officials from several responding agencies, some who witnessed the dog’s trek to the crash site, others who saw Tinsley as she stood calmly by her owner as rescuers rendered aid.

In the interview, Mr. Laundry said he did not know how the crash happened and declined to say whether he had been drinking beforehand. He was driving home to North Hartland, Vt., from a restaurant in New Hampshire, about a 15- or 20-mile trip, when he hit a guardrail, the airbags deployed, and the car tumbled several times into the woods, he said.

He regained consciousness, lying in the snow, with the help of flashing blue lights, having no idea at the time that it was Tinsley who had led the authorities to the crash.

Despite stories like Tinsley’s, the science is not yet settled on whether dogs can intentionally seek out other humans to help their distressed owners.

“Well-supported evidence that dogs intentionally go seek help for their owners just doesn’t exist yet,” said Joshua Van Bourg, a Ph.D. candidate at Arizona State University who studies animal cognition behaviors. “That’s not to say it doesn’t happen, and maybe this dog is an example of it.”

Dogs may do things that result in humans being rescued, Mr. Van Bourg said, “but the jury is out on how much of that is done intentionally for the purpose of rescuing people.”

Even so, this behavior can be remarkable, he said. Tinsley must have loved her owner very much “to be a mile away, free as can be — you know how some dogs get when they’re off leash — and still want to come back.”

There’s evidence to support the conclusion that the stress of the owner “had something to do with the dog coming back,” Mr. Van Bourg said.

For his part, Mr. Laundry has no doubts that his dog made a decision to get help.

“I wouldn’t know what to do with myself if my friend didn’t make it through,” he said. “And Tinsley saved both of us.”