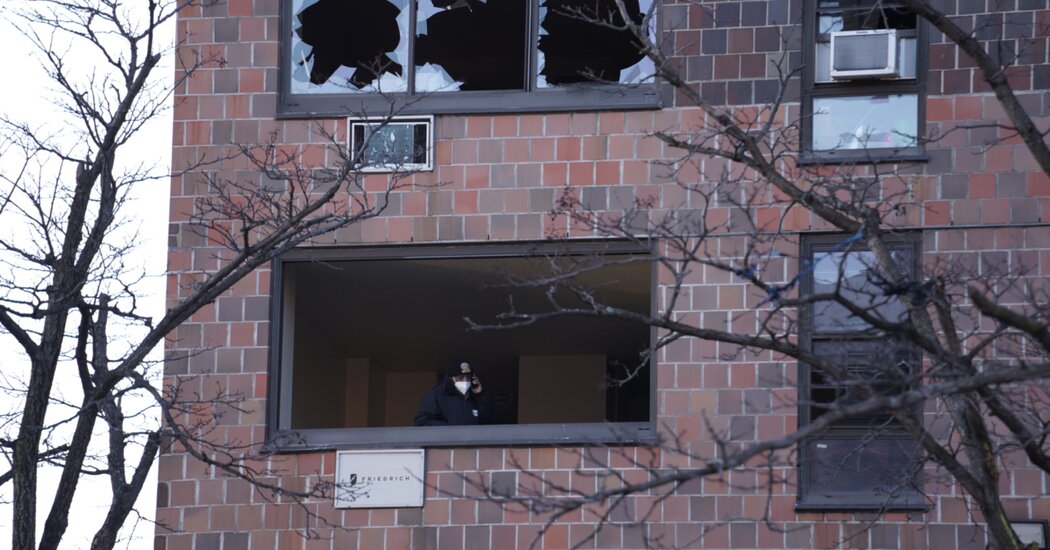 Good morning. It’s Tuesday. We’ll follow up on the fire in the Bronx, which began when a space heater burst into flames. We’ll also look back at a devastating fire that this one brought to mind.

The 17 people who died in the fire on Sunday were killed by inhaling smoke, officials said on Monday as they pieced together how a fire that barely spread beyond a single apartment could be so deadly.

The origin of the fire appeared to be straightforward, officials said: a space heater that had been left running for days caught fire. Thick, black smoke poured into the hallway outside the apartment with the space heater because the door to the apartment had not closed by itself when the residents fled, as it was supposed to. The smoke spread through the 19-story building, displacing the oxygen that people needed to stay conscious.

As President Biden called Mayor Eric Adams to offer assistance, officials said that 15 people remained in critical condition. Adams revised the death count, saying officials believed 17 people had died, down from the 19 reported on Sunday. The medical examiner was working to reach relatives and confirm victims’ identities by video, a change in procedure brought on by the coronavirus pandemic.

Daniel Nigro, the fire commissioner, said the fire had been confined to the hallway outside the apartment where it started. But the smoke that traveled through the building was what caused “the deaths and the serious injuries,” he said. None appeared to have been caused by burns.

The building, considered a model of affordable housing when it opened in 1972, did not have a sprinkler system or outdoor fire escapes. It was equipped with smoke alarms that functioned on Sunday, although many residents said they ignored them because false alarms were common.

The mayor, in only his second week on the job, said officials would “double down” on efforts to raise awareness about the importance of closing doors during a fire. The building’s residents did not shut the door behind them as they ran from the apartment. The door had a self-closing mechanism, as required by the city, but it malfunctioned.

Fire Department investigators tested most of the doors in the building in the course of their investigation on Sunday, a fire official said, and most were found to have automatically closed properly. But the door at the apartment where the fire started — and doors at a handful of other units — did not close as designed, the official said.

The building’s owners said in an email that all of the doors were self-closing, as required. Maintenance staff members repaired a lock on the door where the fire started in July, and at the time, “the self-closing mechanism” was checked and found to operate properly, they said.

Expect a sunny day, New York, but wind chill in the morning will make the temps near the 20s feel colder. At night, it’s mostly clear with temps dropping below the 20s.

The fire on Sunday was the deadliest in New York since 1990 — a fire I wrote about. I couldn’t think about it without calling Mireya Navarro, who was my eyes and ears for that story.

I was assigned to rewrite, which, in the days before smartphones and email and instant-messaging apps, meant talking by phone with colleagues who were on the scene and then constructing a story from the information and quotes they passed along. Mia, as she is known, was one of the Times reporters sent to the burned-out Happy Land Social Club.

It had been destroyed in a fire set by a 35-year-old man who had splashed gasoline in the doorway and struck a match. His former girlfriend was inside. She worked there, taking tickets and checking coats. They had been arguing. The bouncer had thrown him out. He walked to a service station, found a container, pumped a dollar’s worth of gas into it and returned to Happy Land.

What I remembered was how, on the morning after the fire, Mia had gone to a school where the authorities laid out snapshots taken before the 87 bodies were sent to the morgue in Manhattan. “Relatives started pouring in, lining up, to look at photographs,” she said. “I remember getting in line with them. I remember people running into friends who were coming out — they would run into someone who had recognized someone who had been identified, and everybody would explode in sobs.”

Mia said she came away feeling she knew the victims, even though she had talked to their relatives only briefly that day. “I myself used to go to a lot of Latin clubs in Manhattan, so I knew the atmosphere,” she said on Monday. “People may drink, they may hook up, but the main purpose is to dance and have a good time. These were people who didn’t know what was happening with the fire because they were in the midst of that moment of joy.”

I remember talking to her several times as she conveyed the information from her interviews that day. I wrote a story. So did she.

That night, something startling happened.

“I’m not one to have nightmares or a lot of dreams,” Mia, now the editor in chief of Brennan en español at the Brennan Center for Justice in Manhattan, told me on Monday, “but after spending the day with the relatives, I woke up and what I heard was a chorus, almost like a church choir. I felt it was the souls of the people who had died trying to figure out what had happened.”

The man charged with setting the Happy Land fire, Julio Gonzalez, was convicted and given 87 concurrent sentences of 25 years to life in prison. He died in 2016 in an upstate hospital, where he had been taken from prison.

“I got angry, the devil got to me, and I set the fire,” he told detectives.

Durst dies, and his conviction could be thrown out

The strange life of Robert Durst, the errant and eccentric onetime heir to a New York real estate fortune, ended on Monday when he died at 78 in a California hospital. He had been serving a life sentence in the killing of a longtime confidante. But suspicions had trailed him from coast to coast for years, initially after his first wife disappeared following an argument and later after a neighbor was killed and his body dismembered.

Now his one conviction could be vacated because he died before his appeal could be heard.

Under California law, the state’s Courts of Appeal can dismiss the appeal and order the trial court to set aside his September conviction, according to Laurie Levenson, a law professor at Loyola Law School in Los Angeles and the author of a treatise on the state’s criminal laws.

“The whole world knows the jury found Durst guilty,” Professor Levenson said, “but that’s not what the legal record will show. He didn’t finish his appeal.”

He was convicted of the murder of his confidante Susan Berman last September. His lawyer, Chip Lewis, said he soon tested positive for Covid-19 and was briefly put on a ventilator. Lewis said the virus had worsened Durst’s existing medical problems.

It was the early 1980s, and I was riding uptown with a friend on the Madison Avenue bus. She was trying to describe a new invention she had just seen at her office: Post-it Notes. They were sticky but didn’t really stick to things, she said.

“They can easily be removed,” she explained, “leaving no glue on the page.”

I was slightly confused.

“Well, how do they stay on if they don’t really have glue on them?” I asked.

Just then, a man who was sitting across from us got up from his seat, stuck a small square of yellow paper to the outside of my coat and sat back down.

I looked down and grabbed the piece of paper. Off it came.