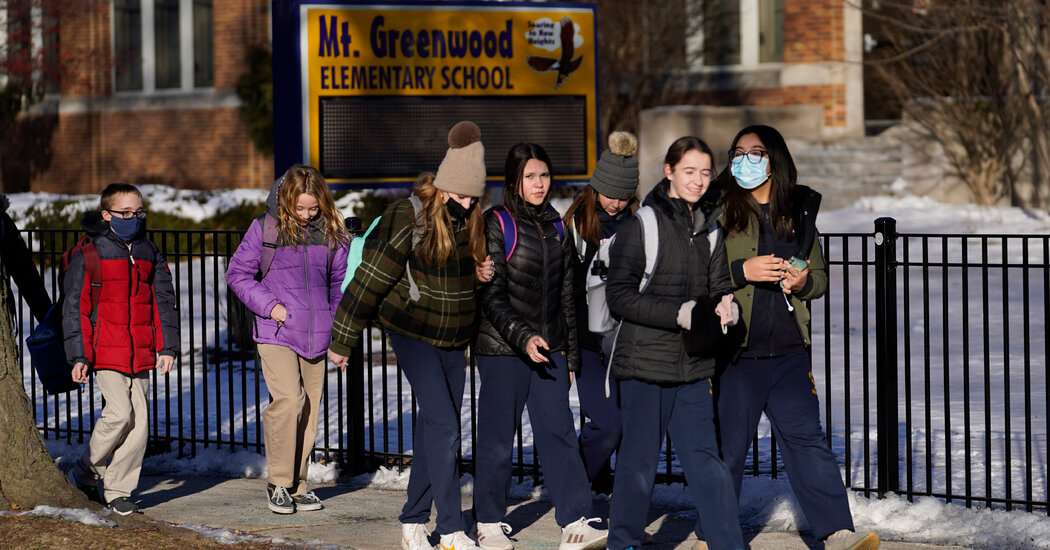 This is the Education Briefing, a weekly update on the most important news in U.S. education. Sign up here to get this newsletter in your inbox.

Today, Chicago classrooms reopen as Los Angeles and other districts struggle to test students for the coronavirus. And a federal lawsuit accuses 16 top private colleges and universities of price-fixing on financial aid.

Chicago schools reopened today after the teachers’ union and the city struck a deal. Students are learning again for the first time since last Tuesday when the district canceled school after teachers voted to stop reporting to their classrooms.

City officials said the deal included provisions for additional testing, along with metrics that would close schools with major outbreaks.

Union leaders said the agreement was imperfect but necessary given the conditions teachers face during the pandemic.

And parents were frustrated, no matter where they fell on the reopening questions. They had to race to find child care and wrestle with the uncertainty.

“I feel like there’s a lot of political stuff going on,” Aaron Wise, who has two children in high school, said. “It’s hard, the situation is difficult. But it really shouldn’t be that difficult.”

But extensive testing may be tough to put into effect. Among the leading issues:

The tests, which can be administered at home, are central to the test-to-stay strategy.

But supply chain issues and weather problems can worsen shortages. In California, for instance, storms over the winter break destroyed a million test kits that were meant for schools.

And tests can be faulty. In Florida this month, an attempt to supply tests to teachers in Broward County turned up expired kits.

Many districts have also chosen an opt-in approach.

That means they’re only testing a select group of students whose parents agree to have them tested — that is, those who may already come from more virus-conscious homes.

Worryingly, about one in 25 tested positive. By Monday, two Seattle schools were closed from staff shortages and infections, and the district was contemplating a return to remote classes.

Parents may not understand how to use the tests.

Most were never returned. And of the 40,000 or so tests that were mailed in, most produced invalid results.

Parents may have to take time off work — time they may not have to spare.

In Seattle, some children waited for hours, some in a driving rain. Los Angeles families also lined up for blocks at school sites for much of last week to receive a swab.

District data from Los Angeles showed that during the week ending Monday, 66,000 tests out of about 458,000 tests had come back positive. That’s a positivity rate of more than 15 percent — lower than county, state and national averages, but still high enough to cause alarm.

Despite the high positivity rate, Los Angeles, the second-largest district in the country, forged ahead with plans to open classrooms for in-person learning on Tuesday. Santos said she was reassured by the testing policy.

“They’re not letting anybody who has a positive test, or who doesn’t test, on campus,” she said. “So I feel secure about that.”

And tests can be expensive.

Since 2020, Los Angeles has had one of the nation’s most ambitious testing programs.

But the initiative — which encompasses more than 600,000 students and staffers — relies on P.C.R. tests provided for about $12 apiece by a start-up that is contractually obligated to provide overnight results.

The district’s cost per test is about half what the state negotiated for its tests with another vendor. But it’s still spending about $5 million per week on testing, the vice president of the school board said.

A new federal lawsuit is accusing 16 elite private colleges and universities — including M.I.T., the University of Chicago and many of the Ivy League schools — of conspiring to reduce financial aid through a price-fixing cartel.

The allegations hinge on a decades-old antitrust exemption, which permits these universities to collaborate on financial aid formulas — provided that they do not consider a student’s ability to pay in the admissions process. (You might know that as “need blind” admissions.)

The suit claims that nine of the schools are not actually need-blind because for many years, they have found ways to consider some applicants’ ability to pay. Because the schools collaborate in an organization called the 568 Presidents Group, the suit says, the actions of nine affect all 16.

One claim: The University of Pennsylvania and Vanderbilt have considered the financial needs of wait-listed applicants.

Another claim: Other schools award “special treatment to the children of wealthy” donors, which, given the limited number of spots, hurts students needing financial aid.

And a conclusion: The suit claims that the colleges have overcharged an estimated 170,000 students who were eligible for financial aid over nearly two decades.

“Privileging the wealthy and disadvantaging the financially needy are inextricably linked,” the suit said. “They are two sides of the same coin.”

Schools across the country are shifting to temporary remote learning as staff members report testing positive or needing to quarantine because of exposure.

“It very quickly gets very serious,” he said of the block-stacking game. “All of that makes it easy to get distracted and become very present in the game.”

Recently, he said, two of his students had a falling out. At one point, they both said they were done with their friendship, which had once been quite close.

So he brought out the Jenga. Their annoyance melted as the tower quivered. Soon, the two started laughing. The old friendship shone through their frustration.

“Once I realized they were having fun, that’s when I brought up the issue,” he said. “I asked, ‘Hey, what really happened?’”

Jenga, though, is just the first step. García tries to guide his students in their conversations, too. He helps them listen to one another and then reflect each other’s positions. At the end, he said, the students had reconciled.

“They were just so focused on the game and they didn’t want to lose, so they kind of let their guard down just enough to be in a space to talk a little bit more openly,” García said.

But he also said there was nothing special about Jenga — any game would do just fine. The important thing, he said, is to create “a more informal, less serious setting where we’re able to play, have fun — and also talk.”

That’s it for today’s briefing. If you have more classroom strategies to share, please email us at educationbriefing@nytimes.com. I’d love to share more teacher brilliance with you all in future newsletters. See you next week!

Sign up here to get the briefing by email.

A First Payday for a Mayor, and for Cryptocurrency