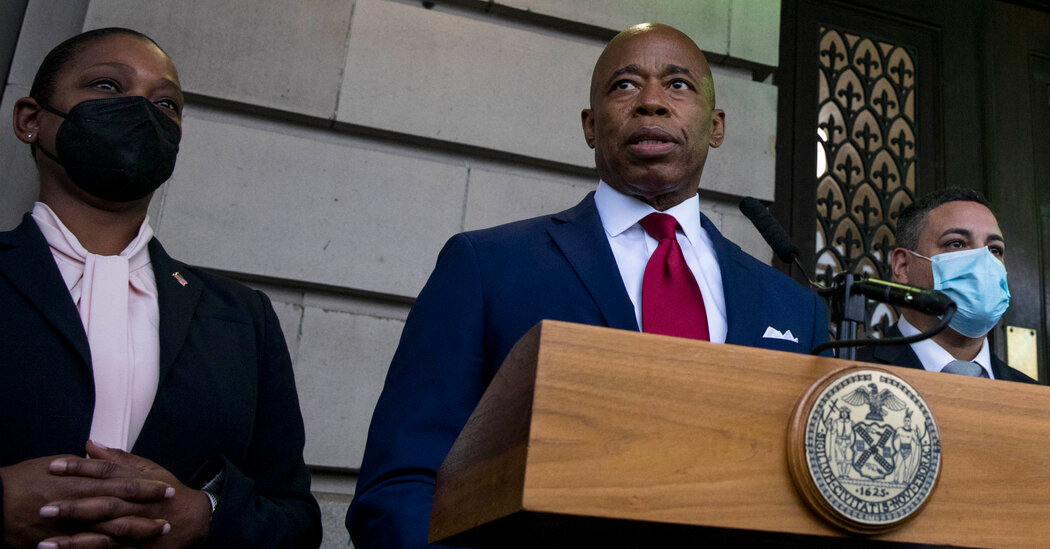 During his successful campaign for mayor of New York City, Eric Adams made his top priority clear: tackling the rise in gun violence that began early in the pandemic.

But the path that Mayor Adams has charted to reduce shootings centers on reinstating a version of the plainclothes police units that had become notorious for their use of force on Black and Latino New Yorkers before the units were disbanded in 2020.

The proposal to restore what were known as anti-crime units has been roundly criticized by progressive groups, and underscores the tensions Mr. Adams is facing over policing issues in his first days in office.

Mr. Adams, a former police captain who was at times an outspoken critic of the department from within, helped lead the backlash against the units after officers killed an unarmed Black man, Amadou Diallo, on his porch in 1999.

The units were widely viewed within the department as an elite force that produced strong results. But they played an outsize role in the searches of millions of young Black and Latino men across the height of the stop-and-frisk era. And studies suggest the practice — which very rarely produced weapons — did little to actually lower crime levels.

To some, Mr. Adams’s history makes him uniquely qualified to rebuild the unit responsibly. But others worry that he has forgotten lessons of the past, and say that an intense focus on gun enforcement has historically led to aggressive and discriminatory policing.

The way Mr. Adams navigates the reinstatement of the unit will offer an early window into how his administration may tackle some of the most critical questions the Police Department faces.

“What we have here is an opportunity to focus not on what uniform is an officer wearing or the name of the unit they’re in,” said Corey Stoughton, a lawyer who leads the special litigation unit of the Legal Aid Society. “But what are they doing? And how is that affecting New Yorkers — and in particular Black and brown New Yorkers — who bore the brunt of aggressive and violent policing activity over the years?”

The push to recreate an anti-crime unit arrives amid a pitched national debate over police practices, and follows a rise in gun violence in New York. After reaching historic lows in 2018 and 2019, shootings increased dramatically in 2020 as the pandemic raged. While they have leveled off in recent months, they have remained higher than prepandemic levels.

In New York and around the country, police departments have used plainclothes units to attempt to tackle illegal guns and drugs. But the units have often faced concerns over their conduct. The police commissioner in Baltimore dissolved plainclothes teams in 2017 after members of a gun task force were accused of extorting civilians and stealing their belongings.

New York was one of the first cities to experiment decades ago with deploying police officers without uniforms. But the anti-crime units that operated out of the department’s 77 precincts and nine housing commands were disbanded in the summer of 2020. The police commissioner at the time, Dermot F. Shea, said they had become obsolete, and pitted officers against the people they served.

The two have said that they will rebrand the team as an “anti-gun unit” that wears body cameras and targets illegal firearms and gang activity.

Several questions about the size and scope of the planned unit remain unanswered. But Mr. Adams and Ms. Sewell say that discriminatory arrests and brutal tactics will be avoided by selecting officers with appropriate temperaments and preparing them for the job.

“I know how to do it right because I fought against what was being done wrong,” Mr. Adams said at a news conference on Sunday. “I’m responding to what I promised New Yorkers, and I have a police commissioner that understands how to do this correctly.”

Still, the city currently is in a position that experts say has spurred trouble with the units in the past, as officials look for short-term solutions to address elevated public concerns about gun violence.

When violent crime rose in the 1990s, officials tripled the ranks of what was then called the Street Crime Unit, and eased the intensive screening process needed to join. Admission to the unit began to center increasingly on internal relationships and arrest metrics, experts said.

The consequences were severe: Four officers who joined the unit after those changes shot Mr. Diallo, a West African immigrant, 41 times after mistaking his wallet for a gun. The case in the Bronx spurred waves of protest and outrage.

Mr. Adams has said that he would rely on a new cast of officers who would receive better supervision and intensive training that focuses on improving how they interact with residents. Evan Thies, a spokesman for Mr. Adams, did not make him available for an interview.

In a statement, Mr. Thies said that the changes to the unit would ensure officers “get guns off the street without violating civil rights or putting the public at risk.” The department made more than 4,000 gun arrests last year, according to its data, one of the highest totals in recent years.

The plan has been welcomed by some who see a need for rapid action to tackle gun violence — and view training as an essential piece of the plan’s success.

“I’m happy to hear that Eric Adams is using this phrase, ‘emotional intelligence,’” said Maria Haberfeld, a professor of police science at the John Jay College of Criminal Justice in New York. “This is what we need to have better police officers.”

Others say the approach falls short, and that calls for more training often create a cycle that boosts police budgets but does not produce results.

“It really doesn’t translate even to the short-term safety of my community, even if it may feel that way to communities outside of mine,” said Monifa Bandele, who works with the Communities United for Police Reform Action Fund, an advocacy group.

“We want Eric Adams to do what we demanded when we took to the streets back in June here and across the country,” she said. “We want to reimagine public safety.”

The specter of the past also lingers for some who bore the brunt of previous enforcement, including David Ourlicht, one of the plaintiffs in the landmark class-action lawsuit that led a judge to declare the Police Department’s stop-and-frisk tactics unconstitutional in 2013.

Studies have shown people who were stopped by the police often were more likely to face negative mental health consequences, including trauma and anxiety. Mr. Ourlicht, who recently settled a separate case against the city for $10,000 after he successfully argued he was again wrongly frisked, said he was frightened by the current discussions around policing and feared a return of aggressive encounters with officers.

“Every day I walk outside of my house, I go over plans of how to keep myself safe,” Mr. Ourlicht said. “A long time ago, I came to the conclusion that this is going to be a major part of my life for the rest of my life.”

And some experts say that the units, viewed within the department as one of the clearest paths to career advancement, incentivized officers to prioritize arrests at all costs.

Mr. Adams has said often that he would not ignore misconduct in the department. “We have their backs,” Mr. Adams said at a news conference on Saturday. “But we are also going to hold them to a high standard. We are not allowing abusive officers to remain among our ranks.”

The previous units were responsible for a disproportionate number of fatal shootings, including some of the city’s high-profile cases.

One was the killing of Saheed Vassell. Anti-crime officers in the Crown Heights area of Brooklyn fatally shot the 34-year-old, who was mentally ill, in 2018 after he pointed a metal pipe toward them as if it were a gun.

“It’s still a nightmare,” said Eric Vassell, his father. “We go to our bed with our son on our mind and wake up in the morning the same way. Thinking about that day, it will always haunt us.”

The New York State attorney general did not find evidence to indict the officers or that their actions were unjustified. Most are still on the force.

But the case spurred questions about the scope of the units. Residents argued that the killing of Mr. Vassell could have been avoided had patrol officers who were familiar with him and the neighborhood responded to the 911 calls instead.

The killing and its aftermath were reflective of what many residents and experts say remains one of the most enduring effects of the units: The damage to public trust and the deep wounds in communities that have yet to heal.

As Mr. Adams carries out his vision for the revamped anti-crime unit and policing broadly, many said that repairing those relationships will be among the most significant challenges.

“If tomorrow, Eric Adams was simply to let anti-crime units out there, he would be taking a page out of what we used to do,” said Chuck Wexler, the executive director of the Police Executive Research Forum. “You have to build public trust before you simply unleash. It really has to be strategic. And it really has to be backed by the community.”