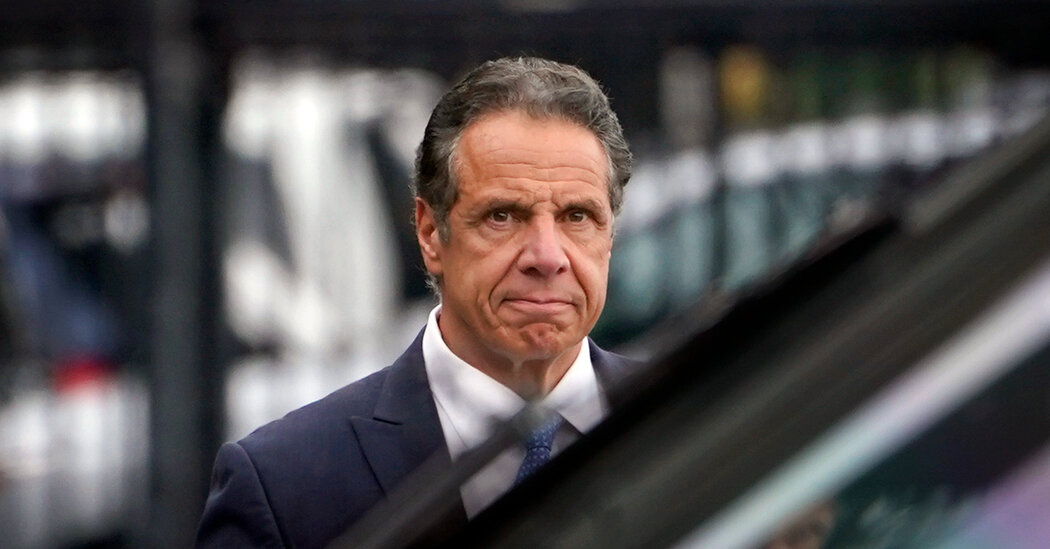 A judge dismissed a criminal complaint on Friday against Andrew M. Cuomo, the former governor of New York, that had accused him of groping a former aide in the Executive Mansion in late 2020.

The charge was dismissed during a virtual arraignment in Albany City Court that lasted just seven minutes. Mr. Cuomo’s personal lawyer briefly shifted the camera during the appearance, offering a seconds-long glimpse of Mr. Cuomo, who wore a black mask and a dark suit with a blue tie.

Mr. Cuomo was not to be seen again as Judge Holly Trexler exchanged some words with his lawyers and the prosecutors and, as expected, granted their request to drop the sex crime charge against the former governor.

The mostly perfunctory appearance brought to a close one of the most serious legal threats Mr. Cuomo had faced over allegations involving his treatment of women, which led to his resignation just four months ago.

In practice, his scheduled court appearance was the last procedural step necessary for prosecutors to drop the charge against Mr. Cuomo after the Albany County district attorney announced on Tuesday that he would not pursue the case.

The district attorney had said that while he was troubled by the allegations and had found the former aide, Brittany Commisso, to be credible, it would be too difficult to prove a criminal case.

But the arraignment of Mr. Cuomo, a Democrat who held outsize sway in Albany for over a decade, made for a remarkable sight.

It was his first public appearance since he stepped down in August. He had lay low for months, occasionally popping up in emails to supporters or in pictures posted on social media — celebrating his birthday with his daughter, fishing with his dog, Captain.

Though most of the New York political class has turned the page on Mr. Cuomo after a string of scandals tarnished his reputation, he has reached out to some of his remaining allies in recent weeks. They were left with the impression that he was interested in mounting a return to public life, however unlikely or far-off that possibility remains.

On Friday, he had to appear in court — if only virtually, because of the ongoing pandemic. Judge Trexler, who had compelled him to appear, said at the onset of the appearance: “This is the matter of the People of the State of New York versus Andrew Cuomo.”

Judge Trexler read from her notes: “The court is acutely aware of the fact that the district attorney’s office has unfettered discretion to determine whether to prosecute a particular suspect or case,” she said.

She said that she had reviewed the motions from Mr. Cuomo’s lawyers, as well as prosecutors, who had to overcome audio issues. Then she declared that the complaint was dismissed.

A lawyer for Ms. Commisso did not immediately respond to a request for comment.

The misdemeanor charge for forcible touching that Mr. Cuomo faced carried a penalty of up to one year in jail. Prosecutors in two other counties recently closed investigations into him, significantly diminishing the likelihood that he would be found criminally culpable for his behavior toward women.

Mr. Cuomo has vehemently denied that he ever touched Ms. Commisso inappropriately, and he has argued that many of the allegations of sexual harassment he faces from other women were the result of misunderstandings or the changing of social norms, not inappropriate sexual advances on his part.

The details of Ms. Commisso’s account were part of a 165-page report from the state attorney general that concluded Mr. Cuomo had sexually harassed 11 women.

The Downfall of Andrew Cuomo

The path to resignation. After drawing national praise for his leadership in the early days of the pandemic, New York Governor Andrew Cuomo was confronted with several scandals that eventually led to his resignation on Aug. 10, 2021. Here is what to know about his political demise:

Sexual harassment accusations. Multiple women accused Mr. Cuomo of harassment, including groping and lewd remarks. An independent inquiry by the New York State attorney general corroborated the accounts. The investigation also found that he retaliated against at least one woman who made her complaints public.

Ms. Commisso, a former executive assistant, has said that Mr. Cuomo, after months of escalating flirtatious behavior, groped her breast while the two were alone in his private residence in December 2020.

Shortly after he resigned, Ms. Commisso filed a complaint with the Albany County sheriff’s office, which further investigated her accusation and charged Mr. Cuomo in late October.

But in an unusual move, especially for a high-profile case, the sheriff, Craig D. Apple, brought the charge without consulting with the Albany County district attorney, David Soares, who would have had to try the case in court.

Mr. Soares said that the complaint Sheriff Apple filed was “potentially defective.” After Mr. Soares’s office concluded its own investigation, he announced this week that prosecutors would not prosecute Mr. Cuomo, although he found Ms. Commisso believable. “After review of all the available evidence,” he said, “we have concluded that we cannot meet our burden at trial.”

His decision underscored the difficulties of trying sexual misconduct cases in criminal court. Prosecutors would have had to prove beyond a reasonable doubt that the crime took place, the highest standard in the legal system, while relying heavily on Ms. Commisso’s testimony.

Earlier this week, Ms. Commisso expressed dismay with Mr. Soares’s decision to drop the case, telling the Times Union of Albany that it “yet again sadly highlights the reason victims are afraid to come forward, especially against people in power.”

On Friday, Richard Azzopardi, the former governor’s spokesman, reiterated Mr. Cuomo’s contention that the allegations against him amounted to a “political manipulation.”

“For the last several weeks, we have remained silent while the process played itself out — do not confuse our respect for the justice system with acquiescence,” Mr. Azzopardi said. “Stay tuned.”