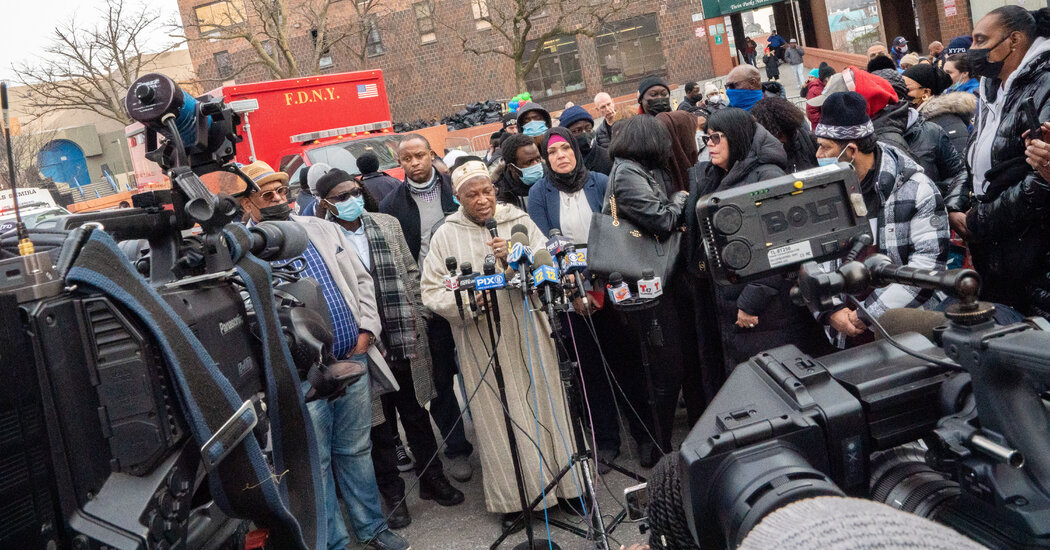 Mabintou Tunkara was lugging grocery bags stuffed with clothes and other belongings when she walked out of the Twin Parks North West apartment building on Thursday.

It was four days after a smoky fire at the 19-story tower killed 17 people, including eight children. Ms. Tunkara, two of whose family members died in the blaze, had been staying at a hotel since evacuating on Sunday. Now she was back to retrieve a few things.

Like other tenants, Ms. Tunkara, whose apartment is on the Bronx building’s top floor, had been told that because the unit had not been deemed uninhabitable, she could move back in as soon as she liked. Asked whether she planned to, she did not hesitate in her answer.

City officials said on Thursday that a total of 35 apartments in the 120-unit building were under orders to vacate as a result of the fire. The rest were considered habitable. Smoke damage alone is not typically considered a reason to vacate under New York City’s building codes.

So even as funeral preparations were made for many of the victims and investigators explored what other conditions may have contributed to the fire, which officials have attributed to a running space heater and two doors that did not close properly, some of those who were able to flee to safety were frustrated by their current circumstances.

A group of tenants, joined by local activists and religious leaders, gathered near the building on Thursday to voice two complaints: that money being raised for victims’ families and other residents was not reaching them quickly enough and that tenants were being encouraged to return too soon.

“The families are not getting all the support that they need,” Mona Davids of Social Impact Strategies, which organized the event, said of the slow pace of financial relief. She also said some tenants were wary of going back to the site of a catastrophe that had left them badly shaken.

“If your apartment was not destroyed, even though it’s reeking of smoke, even though you’re going to be re-traumatized, you must go back into that building,” she said residents were being told.

A spokeswoman for the building’s owner, a consortium of three companies, said that the number of tenants who had balked at returning was small, that anyone who did not wish to stay in the building was being put up at nearby hotels, and that the property owners were seeking permanent housing for those who chose not to return to Twin Parks.

“No one will be displaced,” the spokeswoman said.

Kate Smart, a spokeswoman for Mayor Eric Adams, said “no one is being forced or asked to leave hotels” where they have been housed in the wake of the blaze.

“Lodging remains available to any resident who would like to stay in emergency hotels,” Ms. Smart said. “The city continues to provide support and resources to all families affected by Sunday’s fire.”

Speaking at a news conference on Thursday, Mr. Adams said that a “thorough investigation” into any outstanding violations at the building was continuing. He noted that many of those violations were recorded before the current owners acquired the property.

Asked about his relationship with Rick Gropper, a member of the mayor’s transition committee and a founder of Camber Property Group, which has a stake in the group that now owns the building, Mr. Adams said, “I have not communicated with him at all.”

“He’s one of almost 1,000 people that participated in my transition team,” Mr. Adams said.

Mr. Williams, 62, said he had gotten a call early Thursday from a representative of the company that manages the building.

“‘I heard that you were able to get out,’” Mr. Williams recalled the person saying. “‘Your apartment just has a lot of smoke damage. It’s deemed livable, just needed a paint job and a new door. We could get you back in a few days.’”

The interaction, he said, overwhelmed him and prompted him to go into what he called “Martin Luther King mode.”

“You’re trying to tell me, after I stepped over dead bodies, to go back,” he said, his voice rising and cracking in anger as he recalled what he experienced on Sunday: “Smoke’s fuming out. We running out. I knew I stepped on a human dead person. And they want me to go back.”

“You can’t be serious if you think you’ll ever be able to go back,” he said.