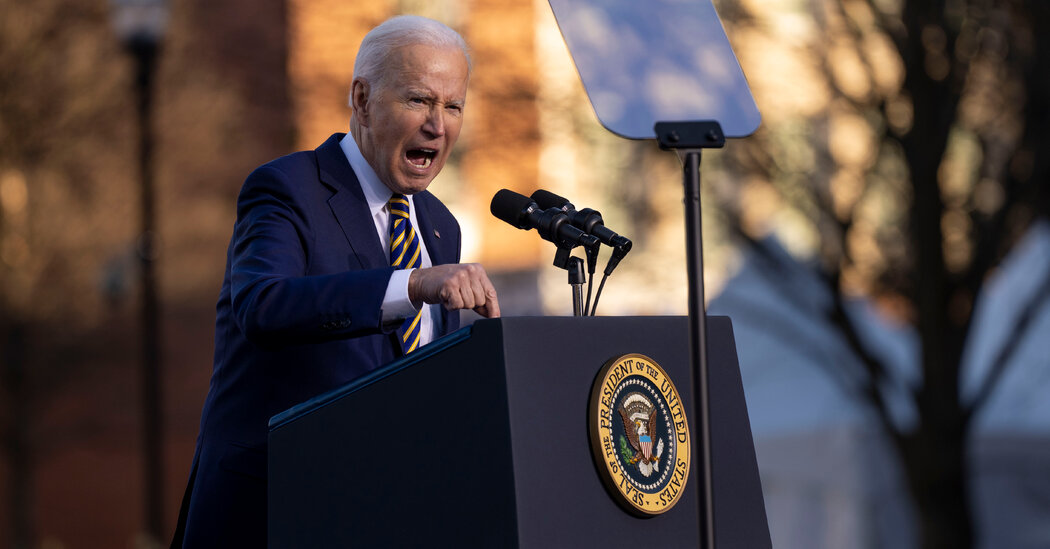 In the nine months since Republicans in Georgia muscled through a host of new voting restrictions, 18 other states have enacted 33 such laws. More than 30 states have concluded their redistricting processes, with extreme partisan gerrymandering locking in Republican control over legislatures in the electoral battlegrounds of Georgia, North Carolina, Ohio and Texas for another 10 years.

On Tuesday, President Biden urged Democrats to change the Senate’s rules to open a path — now blocked by the threat of a Republican filibuster — for federal legislation that would roll back some of the more egregious new voting restrictions and rein in hyperpartisan gerrymandering.

Calm persuasion, Mr. Biden said, is no longer an option for a voting law that Democrats have now been debating among themselves for nearly a year.

“I’ve been having these quiet conversations with members of Congress for the last two months,” the president said in Atlanta on Tuesday. “I’m tired of being quiet!”

To that end, Mr. Biden called for ending the 60-vote threshold for voting rights bills, a step he opposed taking during his campaign and resisted throughout most of the first year of his presidency.

While Mr. Biden waited, however, the laws governing voting were changed in many states, and a degree of voter suppression may have become all but assured.

Confusion over changing voting laws, access, locations and timetables could cause some citizens to miss their opportunities to vote, experts say. Harsher penalties for voters and for election officials could deter people from voting for fear of prosecution over an honest mistake.

And newly enacted district maps that significantly benefit one party — like those in Texas and Ohio, where Republican lawmakers have nearly ensured themselves legislative majorities for a decade, no matter which party wins statewide contests — could also discourage citizens from voting.

“Damage has been done, and it’s not quite clear how much of that damage we’ll be able to undo,” said Cliff Albright, co-founder of Black Voters Matter, a voting rights group. He said his organization had heard from Georgia voters who struggled with the state’s new rules during municipal elections there last year.

The two bills that Democrats are focused on — the Freedom to Vote Act and the John Lewis Voting Rights Advancement Act — would turn back some of the more onerous restrictions passed by state legislatures in 2021 by setting minimum requirements for early voting and for what forms of identification are accepted at polling places, and by easing the voter registration process.

The Freedom to Vote Act would also make partisan gerrymandering illegal, giving the Department of Justice and outside groups more legal tools with which to challenge politically lopsided maps.

Notably, the bills would expand voting access in overwhelmingly Democratic states, such as New York and Delaware, which have very limited early-voting provisions, and would help rein in Democratic gerrymanders in states like Illinois and Maryland.

But with primary season for the midterm elections beginning on March 1 in Texas, the window for passing any federal voting legislation is shrinking — heightening the frustrations of activists who looked to the White House for action, or at least for more muscular statements of support and urgency, throughout 2021.

“Unless President Biden applies the same level of urgency around voting rights as he did for BBB and infrastructure, America may soon be unrecognizable,” Derrick Johnson, the president of the N.A.A.C.P., said in a statement Tuesday, citing Mr. Biden’s stalled Build Back Better bill. “While President Biden delivered a stirring speech today, it’s time for this administration to match their words with actions, and for Congress to do their job.”

Republicans who oppose the Democratic voting effort have warned in dire terms against tampering with the filibuster rule. Senator Mitch McConnell, the Republican leader, has said doing so would “break the Senate.” And Gov. Brian Kemp of Georgia, who signed the voting law that Mr. Biden spent much of his speech condemning — curtailing drop boxes, adding identification requirements and stripping the Georgia secretary of state’s office of some powers over elections, among other provisions — called the Democratic push on voting rights an “assault on election integrity.”

Writing on Twitter Tuesday, Mr. Kemp said Mr. Biden had attacked the Georgia law in “an effort to distract from their many failures and rally their base around a federal takeover of elections.”

Mr. Biden always faced long odds to deliver a substantive legislative victory on voting rights. Democratic senators including Joe Manchin III of West Virginia and Kyrsten Sinema of Arizona, among others, oppose weakening the filibuster rule, warning of potential Republican retaliation should the G.O.P. win a Senate majority, and saying that legislation without bipartisan agreement would further divide the country.

And the 50-50 Senate split means Democrats cannot change the rules without the consent of each member of their caucus.

For its part, the White House insists it has done what it can, issuing an executive order in March calling upon federal agencies to study and potentially expand access to voter registration materials. The Department of Justice more than doubled the size of its civil rights division, the branch that handles voting rights litigation, and has sued Georgia and Texas over their new voting laws and the new district maps passed by the Texas legislature.

Still, frustrated voting rights activists contend that, had Mr. Biden devoted more of his energy to the issue, publicly and forcefully making the case for the legislation, he might have pressured recalcitrant Democrats into going along with a filibuster change for that purpose.

“The administration had over 300 meetings to make the infrastructure bill happen,” said Julián Castro, the former transportation secretary who ran against Mr. Biden for the 2020 Democratic presidential nomination. “They haven’t used that same muscle or effort on voting rights, and that’s been a mistake.”

Instead, the lack of direct engagement by Mr. Biden and Vice President Kamala Harris, whom he put in charge of advancing voting rights legislation at her request, has left many activists and civil rights leaders exasperated.

Last summer, dozens of Democratic legislators in Texas tried to rally the White House and Congress into action on voting rights. When Republicans in Austin moved to enact new restrictions, the Democrats delayed things by fleeing to Washington. While the group met with Ms. Harris and some senators, they never received an audience with Mr. Biden, and attention to their cause dwindled after a few days.

“​​No doubt we wish this work would have been the White House’s primary focus last year,” said Gina Hinojosa, one of the Texas state representatives who organized the flight to Washington.

Voting rights groups also point to a much-anticipated but distinctly unsatisfying conference call with Ms. Harris and her team in November.

Representatives of more than 40 organizations joined the call at 4 p.m. Ms. Harris did not come on the line until 5:01 p.m., according to several attendees, then left after speaking for six minutes and taking no questions.

The White House and an organizer of the event both said Tuesday that the vice president joined and left the call on schedule and never was asked to take questions.

Mr. Biden’s strategy until now has been to buy time for voting rights legislation by scoring victories on his other major legislative programs. He has privately assured voting rights advocates that Democratic holdouts would eventually relent in the face of persistent Republican obstruction. Senate Democrats also chose to give Mr. Manchin time to try and recruit Republican votes, to no avail.

Mr. Manchin shows no sign of budging. He indicated Tuesday that he had no intention of voting to change the filibuster rule to allow a voting rights bill to pass — even one that he helped negotiate.

“Voting is very important. It is a bedrock of democracy,” he told reporters in Washington. “But to break the opportunity for the minority to participate completely, that’s just not who we are.”

Mr. Biden, himself a 36-year Senate veteran, acknowledged the uncertain road ahead.

“I’ve been pretty good at working with senators,” he said. “But man, when you’ve got 51 presidents, it gets harder.”