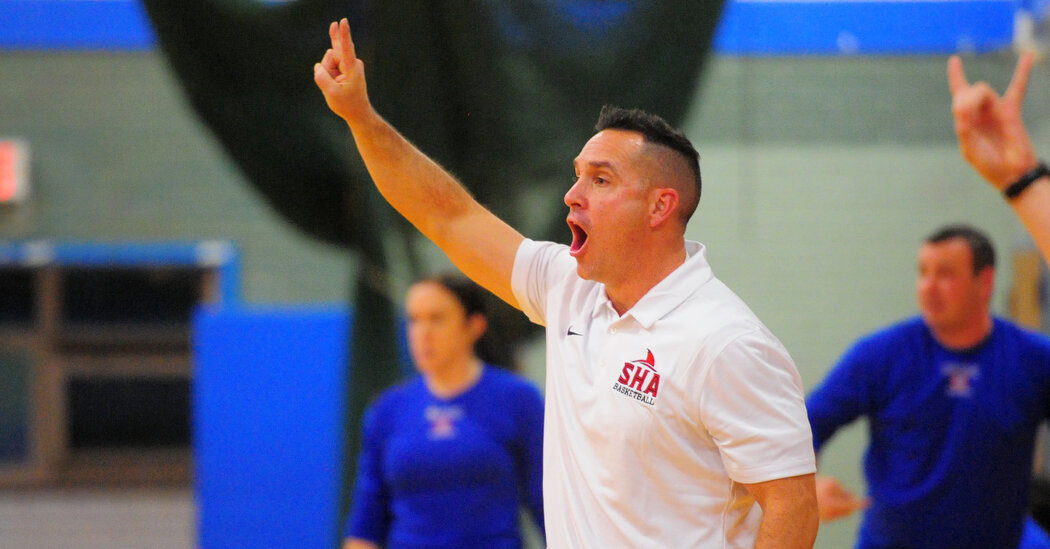 The scoreboard, stuck on zero for the visiting team until the game’s final quarter, wasn’t broken.

The full-court pressure and man-to-man defense had been just that suffocating. Just as unrelenting were the barrage of three-point shots and fast-break chances.

But the lopsided result of the high school girls basketball game in Connecticut this week might have made even Bobby Knight blanch — the final score between Sacred Heart Academy and Lyman Hall High School was 92-4.

Now the coach of Sacred Heart, a Roman Catholic high school for girls in Hamden, Conn., near New Haven, has been suspended for one game by the school’s administration, which apologized for the manner in which “the outcome of the game was achieved” on Monday night.

The suspension of Jason Kirck, the third-year coach of the Sharks, one of the top-ranked teams in the state, was confirmed on Thursday by Al Carbone, the commissioner of the Southern Connecticut Conference. Sacred Heart won’s the league’s Division 2 championship last year.

“It raises a red flag,” Mr. Carbone said on Thursday of the score. “It’s not just it was an 88-point margin. How does it impact our student-athletes?”

It wasn’t the first time that a scholastic sports program had drawn criticism for running up the score on an opponent and prompted a debate over the boundaries between athletic prowess and sportsmanship.

Mr. Carbone said that Mr. Kirck, who has two daughters who play basketball for Sacred Heart, would miss the team’s highly anticipated game against Hamden High School on Thursday night. The decision to suspend him was made by Sacred Heart, according to Mr. Carbone, who said that the league did not have a mercy rule in basketball.

Administrators at Sacred Heart did not immediately respond to phone and email messages seeking comment on Thursday, but expressed remorse over the episode in a statement to GameTimeCT, a scholastic sports website that is part of Hearst Connecticut Media Group.

In a statement, Sister Sheila O’Neill, the school’s president, said: “Sacred Heart Academy values the lessons taught and cultivated through athletic participation, including ethical and responsible behavior, leadership and strength of character and respect for one’s opponents. Last night’s Girls’ Basketball game vs Lyman Hall High School does not align with our values or philosophies.”

Mr. Kirck, 47, did not immediately respond to phone and email messages on Thursday.

Lyman Hall High School, a public school in Wallingford, Conn., did not respond to messages left for its girls basketball coach or its athletic director.

In a statement to media outlets in Connecticut, the coach, Tom Lipka, said that Sacred Heart kept trying to force turnovers and never relented with its fast-break offense.

“They showed no mercy throughout,” Mr. Lipka said.

In an editorial on Thursday, The Hartford Courant newspaper commended Sacred Heart for suspending Mr. Kirck.

“And while the ability of Sacred Heart players is undeniable,’’ the newspaper wrote, “the game needs to serve as an example for adults and students alike that winning isn’t everything.”

The schools will face each other again on Jan. 28.

Jason Shea, the head coach of the boys basketball team at Notre Dame High School in West Haven, where Mr. Kirck had previously worked, defended him Tuesday on Twitter.

“Coach Kirck made mistakes in how he handled the game last night, but enough with the character assassination,” Mr. Shea said. “Coach is a great family man, friend, teacher, & coach who made a mistake which he feels terrible about. get out of your glass houses & move on.”

Mr. Kirck was listed as the girls director of the Connecticut Basketball Academy, where Mr. Shea is also a coach.

In a statement, Gregg Simon, an associate executive director of the Connecticut Interscholastic Athletic Conference, which both Sacred Heart and Lyman Hall are also members of, said that the conference “promotes safety and sportsmanship above all else for our member schools.” The conference said it had been in communication with Sacred Heart and Lyman Hall “as they work through this difficult situation.”

Mr. Carbone, the Southern Connecticut Conference commissioner, pointed out that scholastic coaches in the state must be certified.

“This is not A.A.U. or travel where you may be coached by noncertified people,” he said. “Do we need to do a better job of teaching what sportsmanship is?”

Mr. Carbone said that it was a learning experience for everyone involved, but acknowledged that the score would remain in the record books for perpetuity.

“I don’t think we’re ever going to forget it,” he said. “The score is there. It’s not going away.”