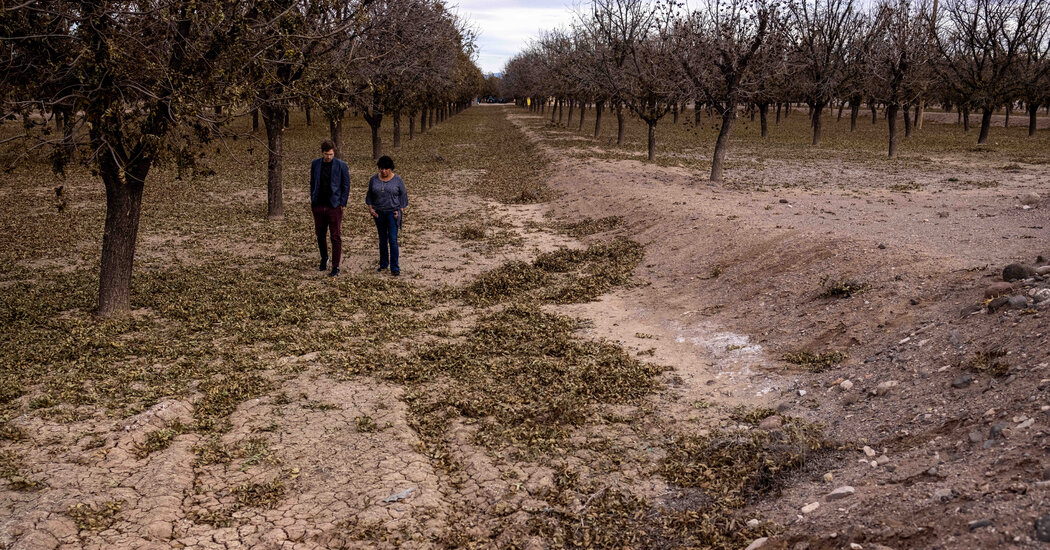 WASHINGTON — Angie Simms had been searching for her 25-year-old son for a week, filing a missing persons report and calling anyone who might have seen him, when the call came last August. Her son, Erik A. Molix, was in a hospital in El Paso, Texas, where he was strapped to his bed, on a ventilator and in a medically induced coma.

Mr. Molix had suffered head trauma after the S.U.V. he was driving with nine undocumented immigrants inside rolled over near Las Cruces, N.M., while Border Patrol agents pursued him at speeds of up to 73 miles per hour. He died Aug. 15, nearly two weeks after the crash; even by then, no one from the Border Patrol or any other law enforcement or government agency had contacted his family.

The number of migrants crossing the border illegally has soared, with the Border Patrol recording the highest number of encounters in more than six decades in the fiscal year that ended Sept. 30. With the surge has come an increase in deaths and injuries from high-speed chases by the Border Patrol, a trend that Customs and Border Protection, which oversees the Border Patrol, attributes to a rise in brazen smugglers trying to flee its agents.

The agency recorded more than 700 “use of force” incidents on or near the southern border in the last fiscal year. Customs and Border Protection does not disclose how many of those ended in death, or how many high-speed chases take place each year.

Crossing the border without documentation or helping people do so is full of risk regardless of the circumstances, and stopping such crossings — and the criminal activity of smugglers — is central to the Border Patrol’s job. But the rising deaths raise questions about how far the agency should go with pursuits of smugglers and migrants, and when and how agents should engage in high-speed chases.

Customs and Border Protection has yet to provide Ms. Simms, a fifth-grade teacher in San Diego, with an explanation of what happened to her son. She saw a news release it issued two weeks after the crash; officials say it is not the agency’s responsibility to explain. She said she understood that officials suspected her son was involved in illegal activity, transporting undocumented immigrants.

“But that doesn’t mean you have to die for it,” she said.

Customs and Border Protection, which is part of the Department of Homeland Security, has a policy stating that agents and officers can conduct high-speed chases when they determine “that the law enforcement benefit and need for emergency driving outweighs the immediate and potential danger created by such emergency driving.” The A.C.L.U. argues that the policy, which the agency publicly disclosed for the first time last month, gives agents too much discretion in determining the risk to public safety.

In a statement to The New York Times, Alejandro N. Mayorkas, the secretary of homeland security, said that while “C.B.P. agents and officers risk their lives every day to keep our communities safe,” the Homeland Security Department “owes the public the fair, objective and transparent investigation of use-of-force incidents to ensure that our highest standards are maintained and enforced.”

But previously unreported documents and details of the crash that killed Mr. Molix shed light on what critics say is a troubling pattern in which the Border Patrol keeps its operations opaque, despite the rising human toll of aggressive enforcement actions.

Early on Aug. 3, a Border Patrol agent saw an S.U.V. traveling slowly just north of Las Cruces with what appeared to be a heavy load, according to a report from the New Mexico State Police.

When the S.U.V. swerved to avoid a Border Patrol checkpoint, on a lonely stretch of road about 70 miles north of the border, the agent and a colleague in a separate car started chasing it. They pursued it for about a mile before one of them “clipped the vehicle and it rolled,” according to local emergency dispatch records. Eight of the 10 passengers — migrants from Ecuador, Honduras, Guatemala and El Salvador — were ejected. An Ecuadorean man later died.

The New Mexico State Police was among the agencies that responded to the crash. Body camera footage from a state police officer captured one of the Border Patrol agents saying: “Our critical incident team is coming out. They’ll do all the crime scene stuff — well, not crime scene, but critical incident scene.”

The agent said that he and his colleague would give statements to the team, which it would share with the police.

Critical incident teams are rarely mentioned by Customs and Border Protection or the Border Patrol. There is no public description of the scope of their authority.

Luis Miranda, a spokesman for Customs and Border Protection, said the teams consist of “highly trained evidence collection experts” who gather and process evidence for investigations, including inquiries into human smuggling and drug trafficking. He also said the teams assist in investigations conducted by the agency’s Office of Professional Responsibility, which looks into claims of agent misconduct and is akin to internal affairs divisions of police departments.

Another Homeland Security official, who was authorized to speak to a reporter about the teams on the condition that the official’s name was not used, confirmed another role they have: collecting evidence that could be used to protect a Border Patrol agent and “help deal with potential liability issues,” such as a future civil suit.

Andrea Guerrero, who leads a community group in San Diego and has spent the past year looking into critical incident teams and their work, said it was “an outright conflict of interest” for the division charged with investigating possible Border Patrol misconduct to rely on assistance from Border Patrol agents on the teams. She has called on Congress to investigate and filed a complaint with the Homeland Security Department.

Customs and Border Protection officials said the El Paso sector’s critical incident team merely helped with measurements for a reconstruction of the crash outside Las Cruces; the Office of Professional Responsibility, they said, is investigating the incident. Yet a member of the El Paso critical incident team reached out to the state police in the days after the crash seeking the department’s full report for its own Border Patrol administrative review, according to an email released by the state police.

Border Patrol encounters that result in injury or death can be investigated by multiple entities: the F.B.I., state and local law enforcement, the Homeland Security Department’s inspector general or Office for Civil Rights and Civil Liberties, and the Office of Professional Responsibility, where most such incidents land for review. But the findings on individual cases are rarely disclosed; such investigations tend to yield few public details beyond total numbers, which show only a fraction result in some type of discipline.

An incident in 2010 drew international attention and calls for change. A 42-year-old Mexican caught entering the country illegally died after he was hogtied, beaten and shocked with a Taser by Border Patrol agents. The Justice Department declined to investigate, but more than a decade later, the case will be heard this year by the Inter-American Commission on Human Rights court — an apparent first for a person killed by a U.S. law enforcement officer.

Chuck Wexler, the executive director of the Police Executive Research Forum, a nonprofit policy and research organization that conducted the external review, said that if his organization had known more at the time about the team’s purpose, it would have “raised red flags.” But instead of explaining what the teams did, the agency cut any mention of them out of the use-of-force policy.

In another case brimming with questions, a Border Patrol agent in Nogales, Ariz., shot an undocumented woman who was unarmed, Marisol García Alcántara, in the head last June while she sat in the back seat of a car. A Nogales Police Department report noted that the Border Patrol supervisor at the scene refused to provide information to officers about what had happened in the lead-up to the crash. The report also noted that a critical incident team arrived on the scene.

Ms. García Alcántara, a mother of three, was taken to a hospital in Tucson, where doctors removed most of the bullet from her head. Three days later, she was discharged and sent to an Immigration and Customs Enforcement detention center, where she remained for 22 days before being deported to Mexico. She said she was never interviewed by law enforcement; a Customs and Border Protection official said the F.B.I. was investigating.

Representative Raúl M. Grijalva of Arizona, a Democrat who represents Tucson, said Ms. García Alcántara’s case raised questions about the “illegal practice” of the critical incident teams which, he said, have no legal authorization and escape the oversight of Congress. Other lawmakers, too, are demanding answers.

Answers have not come easily for Ms. Simms, who had overheard whispers about a car crash and the Border Patrol while she sat by her son in the hospital.

Three days after Mr. Molix died, Ms. Simms heard from Customs and Border Protection for the first time. “We wanted to give our condolences to you and your family,” an investigator with the Office of Professional Responsibility texted. “We also needed to see if we could meet you to sign a medical release form for Mr. Erik Anthony Molix.”

An A.C.L.U. lawyer, Shaw Drake, pieced together the details of the crash using police reports, body camera footage and records of emergency dispatch calls that he obtained through public records requests.

Details of the investigation into what Mr. Molix was doing that day remain under wraps. Customs and Border Protection said that because Mr. Molix was not in Border Patrol custody after he was admitted to the hospital, it was not obliged to notify his family about his injuries.