10 People To Replace James Corden On The Late Late Show 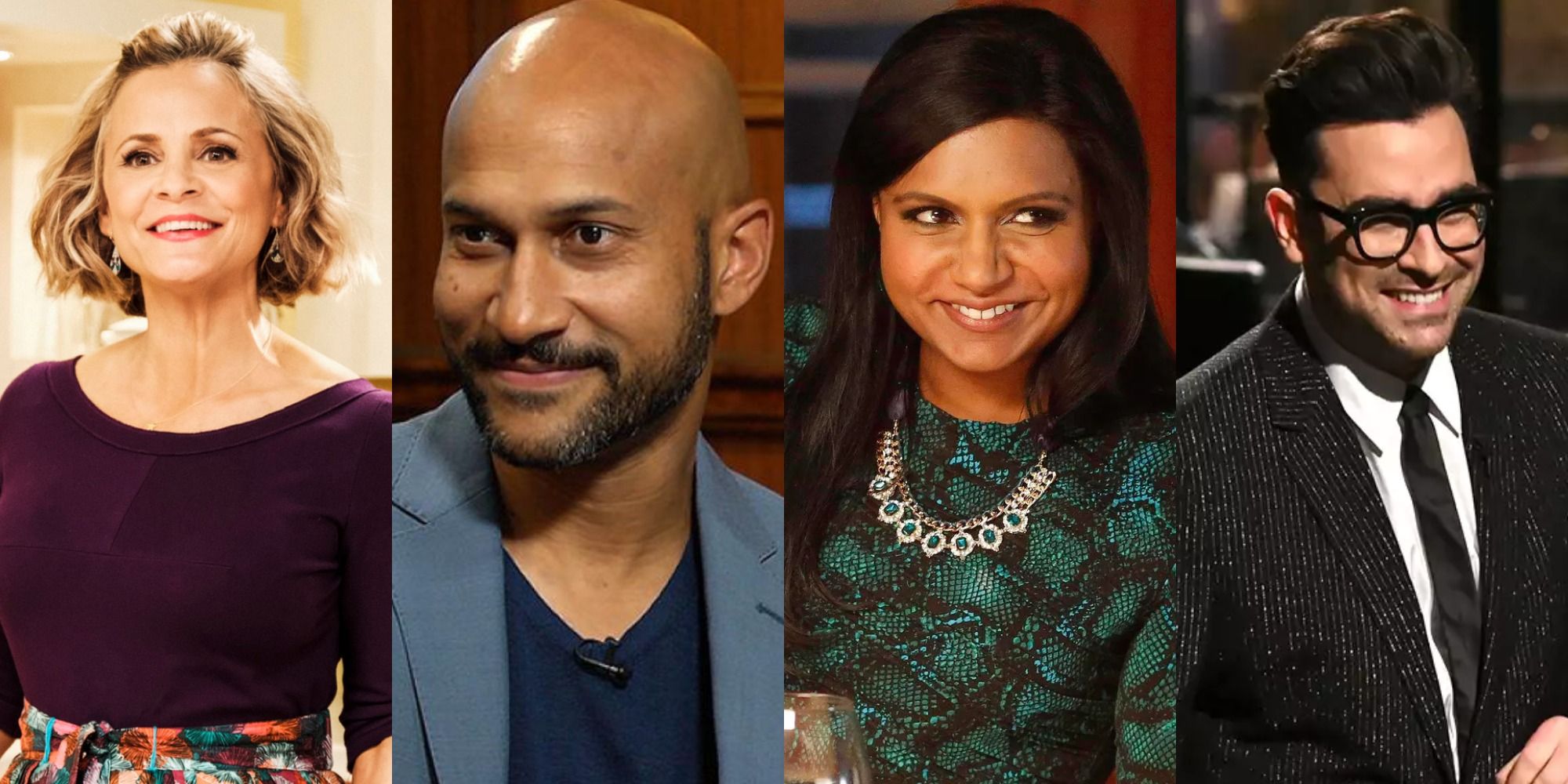 
On April 28th, 2022, James Corden announced that he will be leaving The Late Late Show in mid-2023 (per Screen Rant). His tenure has been marked by viral sensations like Carpool Karaoke and Sidewalk Musicals that led to his almost immediate superstardom in the medium.

With his relatively short reign coming to an end, and the late-night talk show format on the wane, it’s time to look to the future for someone to revitalize one of television’s most beloved traditions.

Mindy Kaling is a brilliant writer, performer, and cultural commentator. Since joining the initial writing staff for The Office and eventually the cast, Kaling has become one of the most prolific producers in Hollywood. She’s co-created five shows across several networks, starring in two of them, and written 7 books of essays and memoirs. All of this is to say, Kaling has one of the strongest cultural voices today without ever being too controversial, and would thus be an ideal fit for the late-night format.

She knows how to be herself on camera, is capable of being both bubbly and biting, and knows how to build a stellar writing staff. And of course, she is one of the few celebrities out there who could genuinely provide Fallon-level enthusiasm for her guests and their projects every night.

J.B. Smoove has been a comedy stalwart for decades now, but he truly rose to prominence as Larry David’s roommate and bad idea guru on Curb Your Enthusiasm. His unique brand of bravado has kept him in the spotlight ever since, appearing in hit TV shows, podcasts, and ad campaigns. His honed persona, a mix of Arsenio Hall inquisitiveness and Tracy Morgan bombast, would bring new energy to the late-night scene and allow for more interesting celebrity interviews than the usual canned anecdotes that have come to define the genre.

Smoove’s show would likely be a throwback of sorts, going back to the days of Arsenio and Jay Leno with a pared-down show more on reliant punchy one-liners and a loose atmosphere viral showcases. If that’s what CBS is looking for, Smoove would be an excellent hire.

Amy Sedaris may not be immediately recognizable to the casual fan, but she has long been a comedian’s comedian. Going all the way back to her cult Comedy Central show Strangers With Candy (in which she co-starred with fellow Second City improviser and current Late Show host Stephen Colbert), Sedaris has been quietly producing fantastic alt-comedy in both her own shows like At Home with Amy Sedaris and guest spots on Broad City and Unbreakable Jimmy Schmidt. Most recently, she’s become a fan favorite to Star Wars fans as Peli Motto in The Mandalorian and The Book of Boba Fett.

With Sedaris at the helm, the show will doubtlessly have some of the best sketches in late night, and the show as a whole will have the unique madcap fun that only Sedaris can provide.

It would be natural to follow Craig Ferguson (Corden’s much-heralded predecessor) and James Corden with another UK comedian, and Noel Fielding would be a natural successor. The colorful goth came to prominence as the co-creator of the cult comedy show The Mighty Boosh, the perfect watch for Rick and Morty fans, and currently co-hosts The Great British Baking Show, where his subtle and friendly irreverence perfectly melds with the British hit’s satisfying sweetness.

Fielding offers a potent mix of Ferguson’s punk-rock irreverence and Corden’s fun-loving energy, and could naturally push boundaries just by being himself five nights a week. He wouldn’t be a typical interviewer and some agents may be wary of putting their stars in his line of fire, but audiences would surely love it.

Haddish is one of the most popular comedians in America right now and is primed for this kind of spotlight. She’s not only a seasoned stand-up, but she also has become something of a movie star after her breakout role in 2017’s Girls Trip. Since then she’s played opposite comedy megastars like Kevin Hart and Tracy Morgan, as well as fostered opportunities for other Black comedians with her series Tiffany Haddish Presents They Ready. And as any interview and red carpet appearance can confirm, she is one of the most charmingly candid artists working today.

She would no doubt bring that energy to the show every night, getting guests comfortable in a casual atmosphere and likely opening every show with better monologues than any of her network counterparts.

The Schitt’s Creek star and co-creator has proven to be one of television’s most exciting new stars. For the final season of his hit sitcom (in which he played alongside his real-life father, Eugene, and sister, Sarah), Levy became the first person ever to receive a Primetime Emmy in each of the four major categories in a single year. And as evidenced by his charming press runs for his various projects, he’s an easy conversationalist who has what any great late-night host needs: excellent taste.

Practically raised around comedians, Levy knows a good joke when he sees one, and knows how to rhetorically play with people to elicit the most entertaining conversation. This is why The Late Late Show would be the ideal future project for the Schitt’s Creek star. The role would serve him well night in and night out, and the easy rapport would free up the show to try new things and explore the format’s still untapped potential.

If CBS is looking to follow Colbert with another descendent of The Daily Show, they could do much worse than Hasan Minhaj. Like fellow alumni Colbert, John Oliver, and Samantha Bee, Minhaj has emerged as an important cultural voice in the comedy world. After working as a correspondent from 2014 to 2018, Minhaj has won two Peabody Awards, one for his 2017 Netflix special Homecoming King and another for his own political comedy show Patriot Act.

He’s charming, cool, and always seems ready for a fun and deep conversation, which comes in handy for interviews with the latest ingenue or a Pulitzer-winning author.

Jordan Peele may be off making hit movies, but his Key & Peele collaborator has been keeping himself busy as well. From his starring role in Schmigadoon! and this year’s The Bubble to a recurring stint on the new Whose Line Is It Anyway?, Key is still one of the most reliable and inviting comic stars working today, yet is still due for another showcase of his many talents.

If Key and many of his Key & Peele collaborators were to take over The Late Late Show, they could deliver sketch work to rival Saturday Night Live, which is ideal in an environment where viewers are often watching on YouTube as opposed to 12:30 at night.

Since her searingly personal and hilarious 2012 special “Live,” Tig Notaro has been one of the most interesting comedians in the industry, expanding beyond stand up to podcasting and acting, appearing prominently in shows like Star Trek: Discovery and one of the biggest movies of 2021, Zack Snyder’s Army of the Dead. Known for her deadpan charm on life’s mundanities as well as its hardships, Notaro is at once withering and heartfelt.

Given her low-key demeanor and distinctly humanist perspective, Notaro’s take on the late-night format would likely hue closer to the old masters like Dick Cavett and Tom Snyder, with longer interviews that delve into more interesting subjects than her counterparts are capable of right now.

If the 59-year-old Scotsman is up for it, there are many fans who would love to see Craig Ferguson return to his post as of late night’s black sheep. Over his nearly 10-year run following Letterman, Ferguson created a casual, free-wheeling antidote to his clean, hyper-viral rivals on the other networks. Instead, Ferguson embraced absurdist improvisation and a meandering interview style that actually led to interesting conversations as opposed to the prepackaged nature of most late-night fare.

In the albeit unlikely event of Ferguson’s return (along with his co-host “robot” Geoff Peterson, of course), he could once again be counter-programming for those pining for the old days of late-night television.