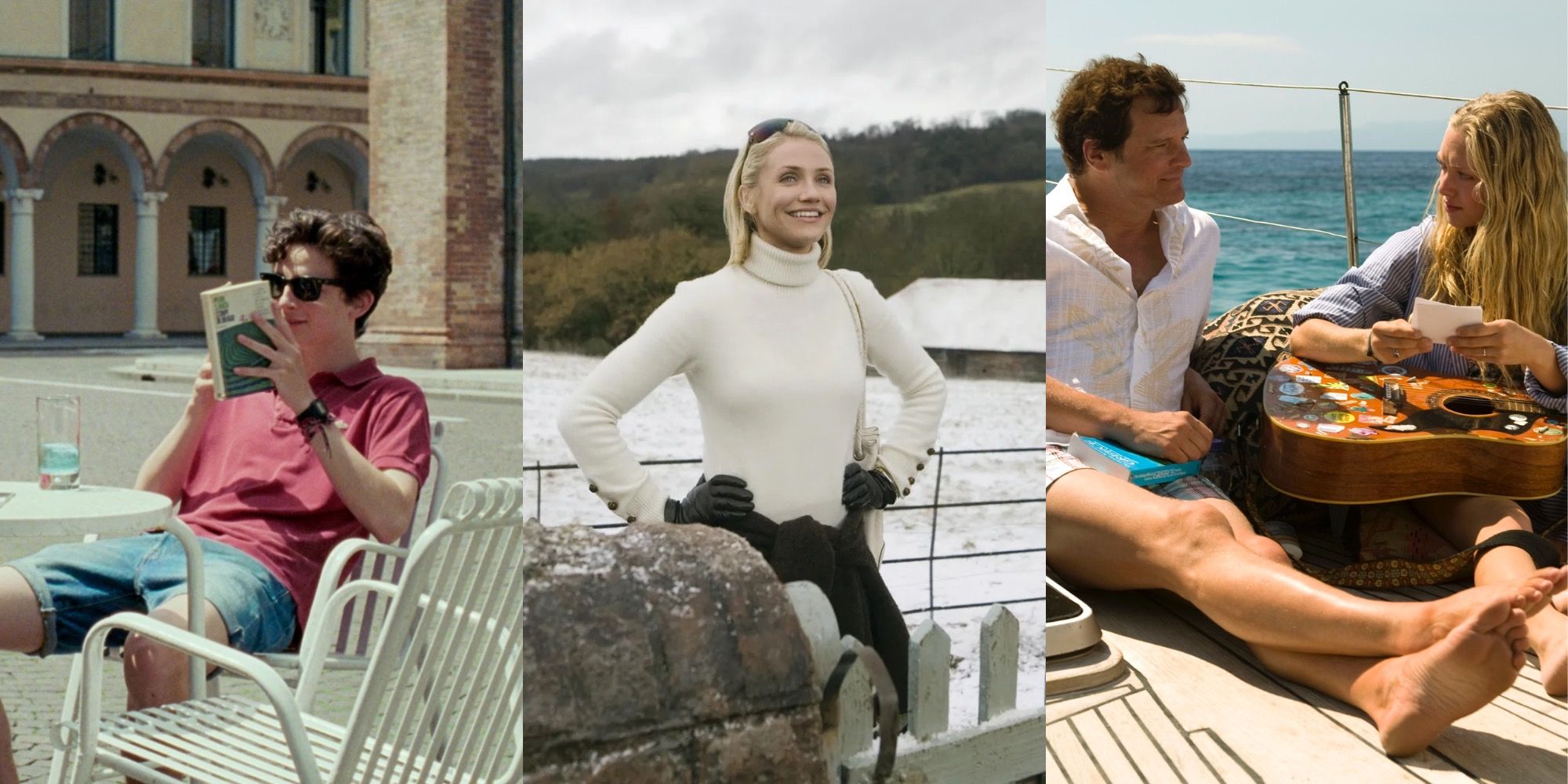 
The recent release, Fantastic Beasts: The Secrets Of Dumbledore, allowed fans to escape from their own lives to the fantasy wizarding world, but for some, the temporary escape wasn’t quite enough.

The movie prompted many fans to seek out flicks that gave a more realistic form of escapism, one in which they could actually escape too. From sunny Italian romances to solo trips around the world, these 10 movies will encourage viewers to pack up their entire life and travel the world (not just the wizarding world).

The Secret Life Of Walter Mitty has become something of a cult classic in recent years, with many fans praising the movie for honestly depicting the harsh realities of life in an innovative way that simultaneously entertains and resonates with viewers. The movie represents the very art of daydreaming and why it is so important to one’s mental health, especially within a stressful working environment.

RELATED: 10 Movies That Will Make You Want To Be A Better Person, According To Reddit

This feel-good flick is the very definition of escapism as fans delve into the daydreams of Walter Mitty, taking them to stunning places within the realms of his mind. Whether it’s a snowy action-packed helicopter trip or skateboarding through the sunny mountains, Walter Mitty encourages fans not to just daydream but also to take a well-deserved break from work.

Call Me By Your Name is the perfect movie to watch when one feels like wallowing due to its promising love story that ends in heartbreak. But the backdrop for Elio and Oliver’s heart-wrenching romance is the stunning scenery of Italy.

The movie reignites that desire to travel with many of the scenes emphasizing the beautiful countryside of Italy alongside its impressive architecture. The idea of spending the summer in Italy whilst simultaneously falling in love, reading books, and lounging around the pool, prompted many fans to pack their bags and book a plane ticket to witness Italy’s beauty with their own eyes.

Letters To Juliet may be one of the best on-screen love stories of all time, especially as part of the story is based on real-life letters to Shakespeare’s infamous Juliet. Whilst the movie may be a perfect romantic flick, it also motivates its viewers to hop on a plane and search for their own Italian adventure.

Through its use of Italian vineyards, countryside, and antique architecture the movie brings to life a romance similar to that of Romeo and Juliet through its wildflowers and rolling hills that almost lock the small city within them. Letters To Juliet and its stunning representation of Italy prompt fans to explore the historic hidden gems spread across the world in more depth through their own traveling adventure.

Brooklyn is one of the best period romances to date and continues to see fans argue over whether they are team Tony or team Jim, but one thing fans were certain of was its ability to prompt some viewers to move across the pond, or at least have the desire to.

RELATED: 10 Films & Series Made In Ireland (& The Real-Life Locations You Can Visit)

Eilis’ move to Brooklyn saw her take on a completely different life, one that was healthier and less repressed from her previous one. She fell in love, found her niche, and made many friends in her travel, her character encouraged many viewers to challenge the anxiety they were feeling and instead see an international move as one that could change their life for the better and forever.

It’s safe to say that The Holiday contains some of the best movie houses resulting in viewers wanting to move in soon after seeing them. The movie captures the beauty of Britain through the quaint countryside by creating a snowy scene that makes Iris’s cottage even more appealing than it already is.

However, the movie also represents the opposite of cold and cozy through Amanda’s flashy villa that showcases the suave sophistication of Hollywood. The Holiday encouraged many viewers to look for their own house swap similar to that of Amanda and Iris, in a bid to change their lives and find love away from home.

Falling Inn Love was a great addition to the Netflix franchise through its combination of romance, self-development, and motivation. The movie depicts the need for change when the world around one feels as though it is crumbling. Falling Inn Love utilizes the beauty of New Zealand as inspiration when Gabriela seeks to turn her run-down inn into something that resembles art.

The movie is the perfect breakup flick for anyone seeking a life change, Gabriela ditches city life for the outback and finds herself enjoying a simple way of life. Falling Inn Love highlighted the calming nature of the countryside through its somewhat remote setting that acted as a refreshing change for any viewers seeking peace away from the busyness of city life.

It may be difficult for fans to decide which Mamma Mia contains the best songs, but it is no secret how much the movie impacted viewers longing for change. The movie depicts the very story of changing one’s life through several characters and their individual stories, whether that be finding their real dad or simply reminiscing on their traveling days.

The movie’s location alongside its story encourages fans to engage with their inner free spirit and pack their bags. Mamma Mia is the perfect movie to convince fans that traveling is the answer by providing fans with a positive outlook on living in not only a new city but a new country.

Eat Pray Love is a biographical flick that stresses the importance of solo travel and why it can be life-changing, both mentally and physically. Elizabeth Gilbert is seeking the appetite she used to have for life and after going through a divorce, finally decides to chase the motivation she lost regarding her life.

The movie highlights how freeing it can be to drop your responsibilities and do some soul searching, within the film she doesn’t just travel to different places but embraces the different cultures she meets along the way. Eat Pray Love is a watching experience that allows viewers to see the true story of a solo traveler play out on screen and prompts them to do the very same thing in a bid to experience everything and find their lust for life once more.

The Best Exotic Marigold Hotel may be one of Dev Patel’s best roles, but it is also another movie that fully immerses itself within the culture and even challenges stereotypes surrounding age, race, and religion. The movie tells a sweet story of an unlikely friendship that is fuelled with comedy to depict how going out of one’s comfort zone can lead to great things.

Set in India, the movie promotes the country as a must-visit new destination by showcasing its vibrant colors, charming culture, and incredible landscape. From the offset, viewers are invited into this vast world of beauty that completely contrasts their mundane lives, leaving viewers to seek their own Indian adventure and undergo a personal transformation.

Shirley Valentine is a criminally underrated movie that continuously breaks the third wall and utilizes clever dialogue to express how undervalued Shirley felt by everyone in her life. The movie explores those feelings in depth through representative scenes of marriage and family life, it identifies Shirley as a woman who needs to get away from the things making her miserable.

In a very out-of-character move, Shirley undergoes a trip away and invites viewers to live vicariously through her, the movie not only highlights the very essence of solo travel but also showcases the beauty of finding happiness somewhere else. It perfectly captures a woman who needs her life to change and finds that in traveling abroad, prompting viewers to do that very same thing!

NEXT: 10 Best Travel Movies Of All Time

Punisher’s Huge Twist Reveals Why He Killed His Family

Amy is a freelance list writer for Screen Rant where her content covers a variety of genres within the world of Film and Televsion. In 2020, Amy graduated with a first class BA Honours degree in English, Film and Television, majoring in Film and Tv. In her final year of study, Amy completed her dissertation which focussed on the representation of disability in horror films, specifically whether the new sub genre of sensory horror was replacing outdated cultural scripts with a more positive representation.

Amy lives in the UK and works full time with children which she enjoys alongside her passion for Films, Tv and Writing!