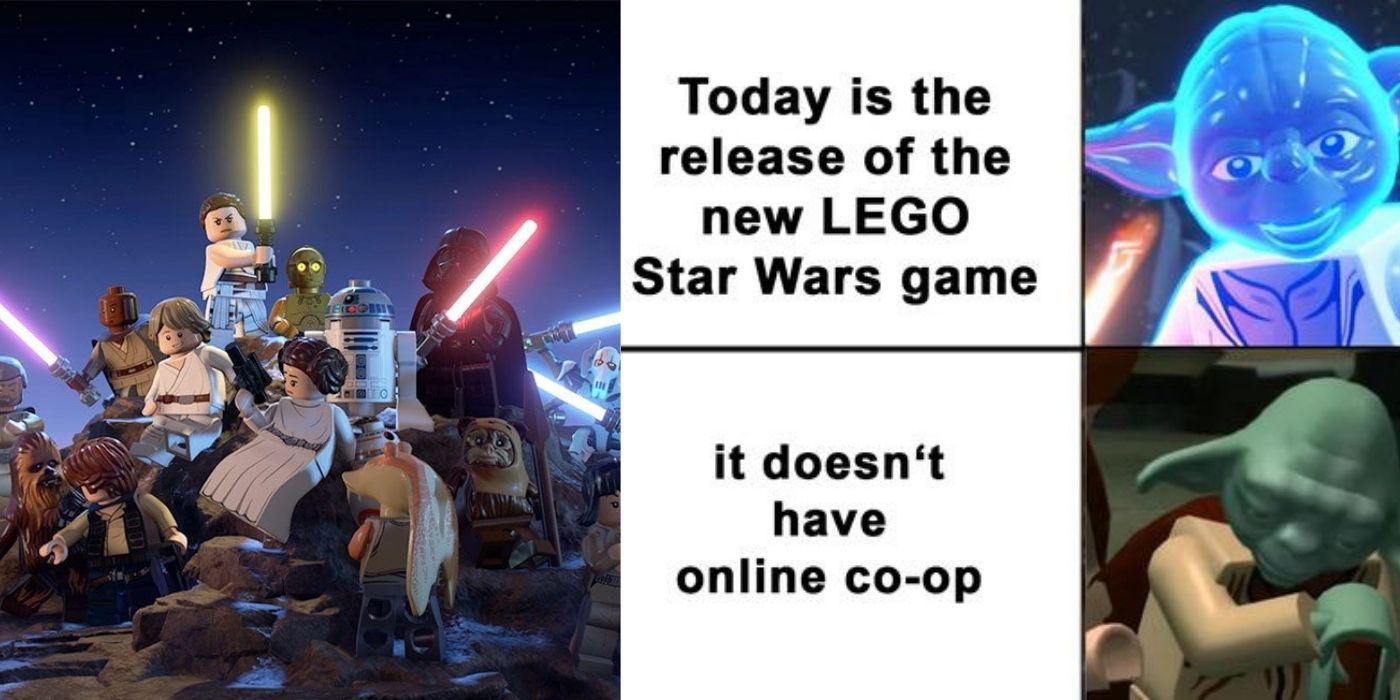 
Star Wars is back in brick form with LEGO Star Wars: The Skywalker Saga released on April 5th, 2022 on all video game platforms. This new game brings all three trilogies together with over 300 playable characters all of which can be used to explore the 24 intergalactic planets. It’s been three years since TT games’ last video game release so fans are eager to jump back into the galaxy far far away.

With any new big game release, Reddit has the fresh memes ready to make fun of the past and present Star Wars LEGO games. From gamers reminiscing about the decade-old LEGO games or simply praising LEGO Star Wars: The Skywalker Saga’s new gameplay and design, these are the best LEGO Star Wars memes.

It wouldn’t be Star Wars without an argument on where to begin in the series as the game offers the ability to start at any episode of the nine films. Whether it’s the sands of Tattoine or the forests of Takodana, LEGO Star Wars: The Skywalker Saga offers everything for each fan of the series.

This meme from IrshamWindborn references multiple other franchises like Harry Potter and Tom Cat from Tom and Jerry all representing gamers who start in each separate trilogy. This image perfectly represents the passionate fans and the wonderful humor that comes from mixing franchises together.

Star Wars fans love the small details of the series and one of those small details comes from the swap-dwelling fuzzy green creature, Yoda. Since The Return of the Jedi in 1981, fans have loved the riddle speaking ancient Jedi who has the silliest high-pitched scream when attacked.

TheSerom96 portrays fans’ sadness in this meme as when players started LEGO Star Wars: The Skywalker Saga they soon realized Yoda’s scream was not present in the game. Yoda has been a symbol of love for Star Wars fans so using him as a symbol for hate makes it that much funnier.

With games like Elden Ring and Fortnite, gamers have gotten used to having the ability to customize their characters however gamers were disappointed to see that they cannot make their own LEGO Jedi or droid with a character customizer.

Chickennuggetgod53_ posted the perfect meme that represents fans’ shock and disappointment at not having a character customizer in LEGO Star Wars: The Skywalker Saga. However, with over 300 playable characters, there are plenty of character upgrades and challenges to explore in the game.

Redditor DarthLaheyy posted a classic Vince McMahon format meme about all the amazing new features coming to the latest LEGO Star Wars game. The meme ends with the ultimate joke being that players can play as a Super GNK droid who is also known as the “trash can droid”. This legendary droid has become an inside joke for Star Wars fans so it makes the perfect meme for LEGO Star Wars.

While some gamers are criticizing the game for its lack of features, there are a ton of gamers praising LEGO Star Wars: The Skywalker Saga and its new combat features. The new combo-styled combat and expansive planet and character roster have a lot to offer for new and old gamers alike.

With the last LEGO Star Wars game being over a decade old, there are years of memes from the original LEGO games. This has led to some frustration for some gamers looking for high-quality memes from the latest game and only finding memes from 2011. This is a wonderful inside joke not only about Star Wars but also about the concept of memes.

Podracing in Star Wars has always been a hot topic and this meme by Alekzc perfectly shows Dean Norris from Breaking Bad disappointed about these new racing levels. While some fight over certain elements from the films, it seems clear from Reddit that fans are embracing this new LEGO game.

It wouldn’t be the Skywalker Saga without the start of the series which includes the epic pod-racing scene from Star Wars: Episode I which for some is one of the best scenes from The Phantom Menace. This new game brings fans back to the sands of Tattoine to race against some scum and villainy!

Reddit user Level_Nonbottom posted a hilarious meme showing ghost Yoda announcing couch co-op is coming to the new game but a sad Yoda reveals there’s no online co-op in the game. Some gamers even believe The Skywalker Saga’s boss fights in local co-op are worse than playing solo.

Co-op has always been an integral part of LEGO games and this was integral in previous console generations when online access was less accessible. Now that online is so much more common, many fans were disappointed to learn that this co-op was limited to local play only.

RELATED: LEGO Star Wars Proves Jar Jar Has Been A Sith Lord All Along

This meme by teknochaos is a wonderful joke about different tear-jerking scenes from films like Titanic, Star Wars: Episode III, and then including the death scene of Qui-Gon Jinn from LEGO Star Wars: The Complete Saga.

While there are many laughs in Star Wars, there are also plenty of sad moments about the demise of some of the most beloved characters like Qui-Gon Jinn. This hilarious meme uses great film references but it also pokes fun at the fact that most gamers who will play LEGO Star Wars are mainly grown men.

Reddit user Section_Ratio created the perfect meme for Star Wars fans who also happen to be middle-aged by showing the evolution of Obi-Wan throughout the series. The meme shows Obi-Wan aging throughout each film while referencing the different Star Wars LEGO games throughout the years.

It’s been almost exactly 45 years since the release of the original Star Wars and fans have been desperate to get their hands on a game that covers the entire three trilogies. Gamers are now celebrating the many decades of Star Wars, with most literally having grown up with the series. LEGO Star Wars: The Complete Saga is the perfect love letter to the franchise.

Jonathan Roberts is a cinephile on the journey to watch every single best picture winner from past to present. He’s currently based out of Brooklyn, New York and loves spending time with his cat Zeus and his dog Miso!